Parents play a key role in shaping their children's approach to eating. Here are some mistakes to avoid with your little one.

My son Jake was a picky eater, or so I thought. He stopped eating vegetables after he turned 2. Lunch was always a peanut butter and jelly sandwich. He refused new foods, and I usually threw out most of his dinner. My husband and I tried the train-into-the-tunnel routine, withheld dessert, and even followed him around, spooning in mouthfuls of food. At times I thought we were creative, but mostly I knew we were just desperate.

The fact is, despite our good intentions, we were only making Jake's eating worse. Recent studies show that adult behavior -- how we handle our child's eating and how we approach our own -- has a lot to do with what kids will eat. To learn the ingredients for more successful meals, Child turned to those at the forefront of this new research: experts such as Leann Birch, Ph.D., a psychologist at Pennsylvania State University in University Park, and Betty Ruth Carruth, Ph.D., R.D., and Jean Skinner, Ph.D., R.D., dietitians at the University of Tennessee, Knoxville.

Since I began writing this story, I've followed their advice and have seen Jake's eating habits dramatically improve. Read on for the 10 mealtime missteps it makes smart sense to avoid.

The first thing you can do to help your kids eat well? Eat well yourself -- in front of them. Adults who enjoy a variety of nutritious foods in a happy setting are far more likely to have kids with healthy attitudes toward eating than adults who constantly diet, overeat, refuse vegetables, or simply leave kids to eat alone, says Jane Kauer, who studies picky eaters at Philadelphia's Monell Chemical Senses Center. Read the nutritional message you're sending your children, and rewrite it if necessary.

2. Applying Too Much Pressure

Any kind of coercion is the parental behavior experts object to most. "Children become overwhelmed," says Ellyn Satter, R.D., a Madison, WI-based dietitian and family therapist. "Even if kids do eat the food, they're likely to avoid it when they get the chance." Plus, pressure makes eating a control issue. "It's not about food anymore; it's about a child's need to be autonomous," says Dr. Carruth.

Forcing can begin with the first spoonful of rice cereal. If babies don't want it, parents sometimes try to get the food down anyway. "New textures aren't going to be accepted right away," says Bryan Vartabedian, a Houston-based pediatric gastroenterologist. "Offer three or four spoonfuls, let it come out on the bib, and put away the spoon." Some babies do better with homemade purees, which allow for very gradual texture changes. Once kids can feed themselves, Satter advocates a strategy -- applauded by many dietitians and doctors -- of division of responsibility. "Parents are responsible for what is presented to eat and the manner in which it is presented," she explains. "Kids are responsible for how much and even whether they eat."

Offering cake to children who eat their broccoli is really just another form of pressure. It adds to mealtime tension, and it won't help them like broccoli. In fact, it may have the opposite effect, Dr. Birch has found. Another problem: When the reward is dessert, it sends the wrong message about what's worth eating. Sweets become more valuable than meat and vegetables.

How to make the joy of eating its own sweet reward? Avoid the issue by offering only fruit. Or make sweets a judgment call (did your child make a reasonable effort to eat?) rather than the result of strict accounting (five peas equal one piece of pie). "A child who isn't hungry for any healthy choices shouldn't be hungry for sweets either," says Dr. Vartabedian.

4. Giving Up On New Foods Too Soon

Too many parents stick to chicken nuggets and grilled cheese because they are eaten without complaint. "To eat a variety of foods, you must have a variety offered to you," says Dr. Skinner. It pays to persevere: Dr. Birch has shown that it takes 10 to 15 exposures for a child to accept a new food. "You have to keep offering the food with the expectation that the child will eat it," says Satter. Look for signs that a child is sneaking up on a food: watching you eat it, allowing it on the plate, and putting it in his mouth and taking it out. (Yes, let him spit it into a napkin.) Try not to get frustrated when kids don't eat, says Satter, "and don't get hysterical with pleasure when they do take a step."

It's easy to fall into the trap of preparing something different for each family member. But this doesn't improve eating habits, and it saps time and energy. Instead, offer limited choices related to what the rest of the family is eating. If you're having sandwiches, for example, kids can choose between turkey and peanut butter. (Accepting certain requests, like removing crusts, gives the child some control.) Be considerate with menu planning. "There should always be at least one item at the table that the child knows and likes," says Satter. If she chooses not to eat anything, so be it. She won't starve in the hours before the next meal. And if she does get a little hungry, she'll begin to understand the consequences of not eating.

In this land of super-size servings, we sometimes forget that children are small and therefore need child-size portions, which equal one tablespoon per year of life, says the American Dietetic Association in Chicago. Too much food is intimidating and discouraging for the child -- and disappointing for the parent who sees a full plate even when the child has sampled everything. Start small and remember that one green bean is better than no green beans and that you can always offer more.

Some children graze all day on cookies, crackers, and other snacks washed down with endless juice boxes. Neither habit helps when it comes to healthy eating because children are filling up on the wrong things and then aren't hungry for healthier options when it's time to eat real meals.

It's not necessary to cut snacks and drinks altogether, says Dr. Vartabedian. "Rather, parents should look at snacks as an opportunity to provide nutritional alternatives or new tastes. Make snacktime a ritual -- offer a few healthy options at specific times of day." And limit juice to six ounces daily, according to the American Academy of Pediatrics.

Taste is only one way young children learn about food. "Feeding is a multisensory experience," says Dr. Vartabedian. A new eater who is never allowed to play with food won't enjoy it as much as one who knows the fun of smearing bananas and crumbling crackers. As for toddlers, what they eat is more important than whether they eat it with a fork, so it's good to be tolerant of messy mealtimes.

Not everyone will learn to like every food. Some people just taste flavors more strongly, especially bitterness. There's also a natural fear of new things ("neophobia") that's strongest during the preschool years. "Parents interpret it as pickiness, but it's actually adaptive and normal," says Dr. Birch. Food neophobia is stronger in some kids than others, mostly due to temperament differences.

When your child refuses new foods, chalk it up to neophobia and keep trying. If after repeated exposures he still doesn't like it, just accept that preference. But if you're worried about his diet, consult a nutrition book to find smart substitutes.

Even children who seem to live on macaroni and cheese may not eat as poorly as moms and dads think. "Parents label children 'picky eaters' and it ends up becoming a self-fulfilling prophecy. A lot of these kids are actually quite normal," says Dr. Vartabedian. And many improve with age. The truly important indicator of a serious problem is the growth curve. "If a child is growing at a normal rate, she is meeting her nutritional needs," he says.Young children, he adds, meet those needs over a broad period of time, not meal to meal or day to day. For reassurance, you can give a multivitamin, but remember that it's better to get nutrients from food. Another helpful exercise is to write down everything your child eats -- even one bite -- for a week. If you come up with at least one serving from every food group, things really aren't so bad after all. 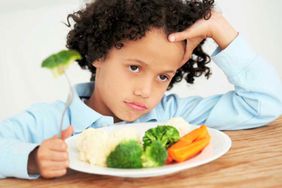 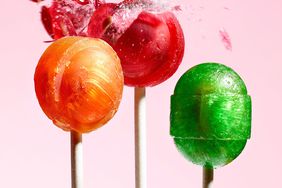 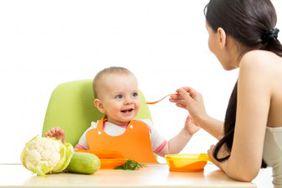 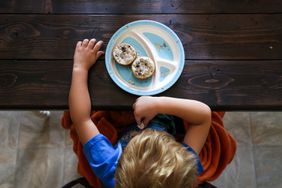 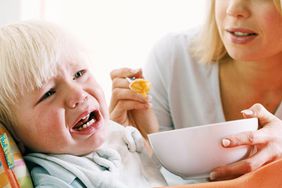 The Top 10 Feeding Challenges—and How to Solve Them