Colbert digs deep for the sentiments of the key under-7 voting demographic.

How much do today's kids know about the 2016 presidential election?

This is the question Stephen Colbert set out to answer when he popped into a class of elementary school kids for a little electoral Q&A, as part of his Road to The White House series.

"I believe kids may have something to teach us all about this election," the "Late Show" host explained. "So I decided to sit down to get the thoughts of the key under-7 voting demographic."

Election 2016: What Moms Want in a President

Solid plan. Colbert pops a squat on a plastic blue chair with a bunch of kids facing him. He introduces himself as, simply, "Stephen," then tosses out a softball: "Do you guys know what the president does?"

It's an easy one, so the hands shoot up. Answers range from "He runs America," to "He makes the rules so people don't do the bad things."

Ok, we're off to a good start.

Next, Colbert whips out a collage of the 24 candidates who have already dropped out of the race. "Know any of these people's names?" he queries, only to be met will a room full of blank stares. "Don't worry about it because you'll never need to learn them."

Fair enough. But the kids didn't know who Ted Cruz was, either—though one did say he kind of looked like a snake. It only took about half a second for most of them to identify Bernie Sanders, though.

"When you look at Bernie, how does it make you feel," Colbert wanted to know. And while a few kids quickly blurted out the word "happy," we're kind of partial to the one little girl who wasn't afraid to admit that Sanders made her feel "confused."

Then Colbert moved on to Hillary Clinton. But instead of asking the kids questions, he took the opportunity to bust out a simile. "She kind of seems like a grandma who gives you candy," he tells the crowd. "But it's not the kind of candy you like. But you eat it anyway because it's the only kind of candy that there is."

And then, finally, it's Trump's turn in the hot seat. "Does anybody have any questions about his hair?" Colbert asks, holding up a picture of The Donald with his mouth open in an apparent mid-scream." Because I'm not sure I can answer those, but I'll try."

The hands fly up, but Colbert only lets two kids answer. One, who says "It kinda looks yellow," and another who basically wins life for describing Trump's comb-over as "a creepy creature that crawled on top of him."

Colbert then had the kids imitate Trump's yelling face (to hilarious effect), before finally asking them—on the count of three—to yell out who they thought the next president would be. 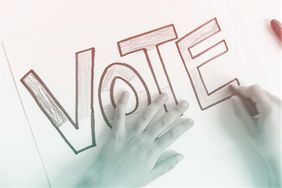