Parents has the inside scoop on what you need to know about these new guidelines for babies and young children.

Got your family in a screen-time groove? Steel yourself: This morning, the American Academy of Pediatrics (AAP) released new policy statements for media use—one for children under age 5, one for children older than 5—and while the recommendations are not all new, the changes may have you rethinking your routines. Parents talked to the authors of the statements, as well as David Hill, M.D., chair of the AAP Council on Communications and Media, to help you make sense of—and implement—the new guidelines right now.

Here are the big updates:

Children can now have screen time starting at 18 months instead of 2 years—with a caveat.

Yep, that’s six months earlier than the AAP had previously suggested. But before you plop your toddler in front of Daniel Tiger, take heed of the fine print: Until your child turns 5 (and in many cases, even longer), it’s best to watch with her. “Young children learn considerably better if a parent is helping them. That’s how they transfer knowledge from 2-D to 3-D and apply it to their understanding of the world. This is crucial especially for toddlers,” says developmental behavioral pediatrician Jenny Radesky, M.D., lead author of the policy statement for children under age 5. It can help to think of screen time like a walk in the park. “You’d say, ‘Hey, look at the ducks’ or “Let’s go smell that flower,’” says Dr. Hill. “And if you’re watching a program with your child, ideally you will also point out aspects of it and look for ways to guide your child through the experience.” (One bright spot for little ones: FaceTiming has now officially been deemed absolutely fine, starting at birth.)

All screen time is no longer created equal.

The AAP doesn’t have the bandwidth to evaluate individual television shows and apps, so it has given its stamp of approval to the nonprofit Common Sense Media and suggests that parents access the organization’s website to find programming that’s appropriate for kids. Co-viewing for quality control works too. “If you think the pace is too frenetic, if there’s violence you didn’t expect, if the concept the media is teaching is too simple, then uninstall that program and find something else,” says Dr. Radesky.

The time limits have changed.

For children 18 months to 5 years, the AAP now recommends aiming for one hour of screen entertainment per day, rather than two. The reason: Research shows that babies who watch two hours a day tend to maintain or increase their screen time through adolescence, a period when 90 or more minutes of daily screen time is associated with obesity. “We changed the guidelines because we feel it’s too hard to tell young kids that two hours is the max and then ask them to peel that back when they’re older,” says Dr. Radesky.

Despite the correlation with obesity, the AAP’s new policy statement for children ages 5 to 17 actually has no standard screen-time limit. But don’t worry: That doesn’t mean kids now have carte blanche to play Minecraft until 2 a.m. Instead, says Megan A. Moreno, M.D., author of the policy statement for children ages 5 to 17, “Our focus is having parents sit down with kids and prioritize key health behaviors: an hour of exercise a day, eight to 10 hours of sleep, time for homework, family time, and time that is completely screen-free.” After that, she says, “Look at the time that’s left and see how much seems reasonable for media use.” On a busy day with sports practices and a school project to complete, it could be as little as 10 minutes.

Another new addition to the policy statement: screen-time limitations for parents, especially of younger children. During mealtimes and parent-child playtimes, the new statement suggests that parents set their phones to do not disturb. “Our studies have suggested that when mobile phones are in use, there’s less parent-child conversation, less nonverbal interaction–which is how we communicate emotional connection—and possibly more conflict. That’s why this is a new recommendation,” says Dr. Radesky.

You have a new job: Media Mentor.

Whenever you’re exposing your child to screens, Dr. Hill says you should consider this question: Am I using this tool to help our family meet its goals and values? “Technology should be a source of connection rather than disconnection in families,” adds Dr. Radesky. “It’s important to show your kids that you use media to sit together and laugh, to create a funny video that you share with friends, to Skype with grandparents. That sends a different implicit message than using media to calm down when you’re upset or keeping it on in the background all the time without considering why.” Be a role model for politeness and safety too. It’s your responsibility to show your kid that you should never look at your phone in the car and that you should treat friends on social media with the same courtesy you give friends in real life.

Overwhelmed? To help parents stick to the guidelines, the AAP has launched an online tool at Healthy Children, where parents can input their children’s ages as well as their goals for sleep, homework, exercise, and meals, and get a printable media plan. 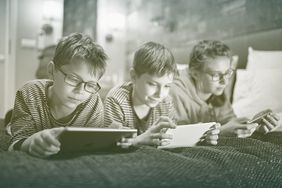