The book, written by Kate Schatz and illustrated by Miriam Klein Stahl, takes the premise of most "A to Z" books and spins it on its head, using notable female figures throughout history to represent each letter.

Schatz was kind enough to chat with me about her first foray into children's literature and how her 5-year-old daughter inspired Rad American Women A-Z to come to life.

Parents: What motivated you to write this book?

Kate Schatz: I'm a fiction writer by trade. I've written and published short stories, articles, and essays. I published a book of fiction several years ago ... about PJ Harvey. I've always been a writer, but this is my first foray into writing for children, which is something that I always knew that I wanted to do. Having kids just pretty much changes everything; it really just changed the way I thought about writing and art and feminism. And it just started to really make sense to me that I was going to write something for children since that was what so much of my life was dealing with.

P: So when you were going to find books for your daughter did you feel like there was a hole, at least in the historical aspect, for girls?

KS: I really did. I think that what's unique about this book is that we wanted to make something that was historical and educational and informative, but also was aesthetically pleasing and fun. And that's the big thing that I wasn't finding. You'll find kind of these dry biographies of different women in history but they look very much like what a kid would find in a classroom. Children's books have come so far and I think more and more publishers try to gear towards parents as well—creating books that parents actually like to read and look at.

P: How did you choose a woman for each letter, since I'm sure it was really hard to pick for each one?

KS: It was really hard, and really fun. I made a list of my own, people who were my heroes and whom I thought would be interesting, but I wanted to cast the net as far as possible.

I sent a Facebook message to about 80 different people—I was really talking to family, friends, people who I knew were really interested in women's history and people that I knew weren't necessarily. From there, I made a spreadsheet and just started to kind of narrow it down. I really wanted to be as diverse as possible, in terms of race and ethnicity as well as time period, and field in which they were working. I wanted to have women who where still living and women who were not living. It was quite a process

P: I was curious about how you approached writing this because it does deal with more tough issues in history. What did you do to make the book digestible to both kids and adults?

KS: I wanted to be respectful and real about these women's lives. I didn't want to be sugar coating things, and I also knew that I was going to have a child and adult audience. I really believe that children can handle a lot more than we think they can. They see the world and they get what's going on and I think that we owe them honesty and truth, but we need to do it delicately and mindfully.

I thought a lot about how would I talk to about these things with my own kids. In the intro for K, which is Kate Bornstein, I explain what it means to be transgender. When I was writing that I was like, 'How do you explain what it means to be transgender to children?' For that instance, I did run it by some friends who are really close with transgender people or are transgender. I really wanted them to read it and be like, 'Am I doing this right? Am I explaining this in an OK way?' They gave me the thumbs up.

P: That's very cool. I think it's important because it opens up those tough conversations while kids are still able to understand them.

KS: And I think the reality is, it's tough for the parents, but not as tough for the kids. The real struggle is for the parents to articulate these things because we're scared of how people react, scared that we'll say something wrong. I think that a large percentage of the time children can really receive these messages and they get it.

P: Do you think that young boys could read this book too and take away the same things from it?

KS: Absolutely. It's so important to me that boys read this. I tend to say this book was inspired by my daughter but I think I was inspired to finish because of my [10-month-old] son. When I had a boy, I realized there's a whole other way of thinking about gender and what it means to raise a compassionate, strong boy. I think that just as girls need to have strong role models, boys need to have them as well. I think it's really important that boys look up to strong women.

KS: I want them to think that history is cool, you know? It is exciting and interesting and it's fun to read about different people's stories. I hope they find inspiration in unexpected places and I hope they can take inspiration from the different stories and apply them to their own lives. These were all great women who achieved great things, but also they were all kids like you at one point. I'd say for older kids who are reading it, I hope they ask: Why haven't I heard of these people before? And how can I find out more?

Check out an excerpt from Rad American Women A-Z below, and grab a copy for yourself.

This interview has been edited and condensed.

Brooke Bunce is an editorial assistant at Parents. She hopes to be a radical American superwoman all the time. Follow her on Twitter. 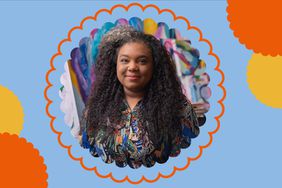