And she gives a whole new meanng to the phrase "mom hair."

Virginia Mellen wants her son Avi to grown up with a mom who makes decisions about her appearance based on her own heart and instincts—not on what other people think. And that's part of the reason she decided to post a picture of her cool new buzz cut on Instagram last week.

"I shaved my head for the first time in high school, and then a few more times throughout college," she wrote in the caption. "I always felt most comfortable, confident, and attractive with a shaved head."

We can see why—she looks amazing rocking this bada*s look that is seriously hard to pull off. And yet for some reason, the mom of one initially felt gun shy about pulling the trigger. "I kept hesitating," she explained. "Is this ok to do now that I'm a mom? What will people think now that I'm older? What if people incorrectly think it's a political statement, or I had a mental breakdown?"

"Then last night I had another thought," she continued. "I want my son to grow up with a mom who doesn't make decisions about her appearance based on what other people think. I want him to know that there is no particular way a mom or a woman is 'supposed' to look. So last night I shaved my head, and you know what? I don't think he noticed."

Maybe not, but we still LOVE what she is teaching him! And so do others, apparently, because Mellen told the Huffington Post that after sharing her photo in the Pantsuit Nation Facebook group, she's gotten more than 50,000 reactions!

"I have been surprised at the number of women who have said they wish they could shave their heads but they are 'too old' or ''don't have the face for it.' she said. "But I urge them to go for it! I am still a fairly new mom, but the most important knowledge I have gained so far is that there is no right way to be a mom. There is such enormous pressure on mothers to be a certain way, but I think even young kids can benefit from seeing our individuality." 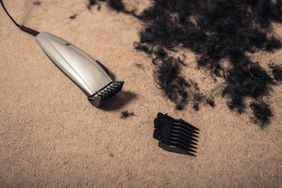