Lying and Stealing.. and What You Can Do to Stop It

Penelope Leach, Ph.D., explains why young children occasionally lie and steal -- and offers advice on what you can do about it.

If you are truly thinking about "discipline" as a matter of showing your child how to behave, you will find that most "behavior problems" are problems of maturity rather than morality and that most of the problematic issues of discipline can be easily resolved. Some degree of attention-seeking behavior, for example, is a normal way for a very young child to respond to rationed attention from busy adults. If the ration of pleasant attention can be increased, he won't have to clamor to make you scold him.

Small children live in a world that's difficult for them to manage and in which they often stand accused of doing damage of one kind or another. Denying wrongdoing is therefore their most usual kind of lie and the kind that most often gets them into trouble. Your child breaks his sister's doll by mistake. Faced with it, he denies the whole incident. Your are probably angrier with him for the lie than you are about the breakage.

If you feel strongly that your child should own up when he has done something wrong, do make it easy. "This doll is broken. I wonder what happened?" is much more likely to enable him to say, "I broke it, I'm sorry" than "You've broken this doll, haven't you, you naughty, careless boy." But if your child does admit to something, of his accord or because you force it out of him, do make sure that you don't overwhelm him with anger and punishments. You cannot have it both ways. If you want him to tell you when he has done something wrong, you cannot also be furious with him. If you are furious, he would be foolish to tell you next time, wouldn't he?

Tall stories get some children into trouble too. In early childhood, a lot of children still confuse reality and fantasy, and what they wish had happened with what really did. After all, they can happily accept stories about the Easter bunny while keeping a quite unmagic rabbit of their own; they see no conflict between the two.

If you are going to read your child stories and help him to enjoy the mythology of childhood in his culture, such as Santa Claus, it is unreasonable to jump on him for lying when he comes in from a walk with an elaborate story of his own. Of course, he didn't really meet a space lady. He probably doesn't even think he did. But just as it's sad if older children force a four-year-old to pick holes in the fantasy of Santa Claus ("We haven't even got a chimney, silly"), so it's a pity if his own fantasies are beyond the pale. Enjoy the story. Being not true does not make it a lie in any moral sense.

Parents sometimes worry because their children seem to have no regard for the truth at all. They may overhear them mentioning Mommy's new dress when she hasn't got one, or announcing that they were sick last night when they weren't, or just telling a friend that they are going out for lunch when they aren't. There are lots of reasons for casually inaccurate talk and an important one is that the child hears it from adults. Adults tell endless untruths out of tact, kindness, a desire to avoid hurting other people's feelings or to save their own time. Children hear them. Your child hears you agreeing with Mrs. Smith that the weather is much too hot when you have just told him how much you like the heat, hears you on the telephone excusing yourself from something because you have invisible visitors. Unless the reasons for these "white" lies are explained to him, he cannot be expected to see why he must never exaggerate or falsify when you can.

If your child tells so many stories and adds so much embroidery to his accounts of daily life that you cannot be sure what is true and what is not, it may be time to make it clear to him why truth matters. Don't fall back on it being "naughty" to tell lies. Instead, try him with the story of "the boy who cried wolf." It is a good story. He will enjoy it. Having told it, you can discuss it with him. Point out that you, and all the people who help take care of him, really need to be able to distinguish between what is true and what is not, so as to be sure of knowing when something important has happened to him or when he is really feeling ill or scared. Phrase the whole conversation so that he feels you care about his telling the truth because you care about him and want to be sure you look after him properly, that it is a matter of accurate communication rather than "being good."

Many young children -- especially those with no older brothers and sisters to keep asserting "That's mine!" -- are as vague about property rights as they are about truth. Within the family there will be lots of things that belong to everybody, some that belong to particular people but can be freely borrowed and a few that are "private possessions" for the use of the owner only. Outside the family there are complications too. It is all right to keep the little ball you found in the bushes in the park but it is not all right to keep a purse. It is all right to bring your painting home from nursery school but not a piece of play dough. People are allowed to take flyers from stores (though not the whole pile) but not packages of soup (not even one). There's no purpose in making a moral issue out of young child's collecting things that catch his fancy until he's able to understand all this. You cannot afford to take it entirely casually, though, because even at the age of three or four, other people may call it stealing and make a major song and dance about it.

You might find it useful to separate the issue of principle from the complexities of daily behavior. Discuss the first and have some rules to guide the second, such as: don't bring anything away from somebody else's house without asking; always ask a grown-up if you may keep anything you find; don't pick anything up in a store unless a grown-up says it's all right. Try not to be especially moralistic about money. If your child takes some from your purse, stop and ask yourself what you would have said if it had been a lipstick he took, and then say the same about the money. To young children both are the same. Treasure. They know money is precious, of course, because they hear you talking about it and see you exchanging it for nice things. But to children, money is like those tokens you put in slot machines; they have no concept of real money.

The child who behaves like a magpie, collecting in a bottom drawer money he never tries to use and other people's possessions he does not even really want, may be in emotional trouble. He may be trying to take in a symbolic way something that he does not feel he is being given. It is probably love or approval that he feels short of. Instead of being furious and upset and making him feel disgraced, could you try to offer what he needs? If you cannot, and if the stealing goes on, you would probably be sensible to ask for professional help before your child reaches school age. It is very much easier for a child to acquire a label such as "thief" than to get rid of it.

Excerpts from Penelope Leach's Your Baby & Child, available in bookstores nationwide, are reprinted with permission of Alfred A. Knopf. 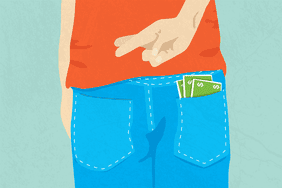 My Child Stole Money From Me, What Do I Do?