A father from Indiana is making headlines nationwide after taking to Facebook back in July to offer up "free" spankings. "Parents, your kids need a whoopin? Summer can't end fast enough? Stop by, I'm set up! No kids over 13.... They may whoop me," Dwayne A. Stamper Sr. wrote alongside the photo of himself reclining, with a wooden paddle in hand, at what looks like it could be a lemonade stand with a sign that reads "Free Ass Whoopins LLC."

Reactions ranged from laughing and cheering Stamper on to admonishing him for an inappropriate, troubling proposal.

Commenters who support the Indiana dad wrote, "Hell yeah this is why the world is the way it is. You cross the line u get dealt with not talked too spoken with but straight ass whoopins like back in the day" and "Your [sp] my hero!!! Kids are so not being held accountable these days. High five to you and may you help at least one family gain control of their kids."

Parents on the other side of the debate called Stamper out, writing, "Sorry, violence begets violence! Just because your parents were not good parents doesn't mean you need to maintain the status quo! If you want your child to respect you, you need to also respect her/him!" and "There's something undoubtedly wrong with anyone who wants to beat another person's child. Weirdly perverted and sick. Much less go through the trouble of setting up your elementary school level 'stand' and sitting there."

Stamper shared in a separate post that he was "inspired" to set up his spanking stand when he encountered a crying 5-year-old at a restaurant. "Parents if you let your child act this way, you're the problem with our snowflake society today!" he wrote in his post. "You don't have to beat your child but you do have to show them others in this world don't wanna hear their crybaby little ass!"

Stamper and his supporters may be onboard with corporal punishment, but experts and research say it not only does not work but is harmful to children's health and behavior in the short-term and long-run.

The bottom-line, according to the American Academy of Pediatrics: "Because of the negative consequences of spanking and because it has been demonstrated to be no more effective than other approaches for managing undesired behavior in children, the American Academy of Pediatrics recommends that parents be encouraged and assisted in developing methods other than spanking in response to undesired behavior." 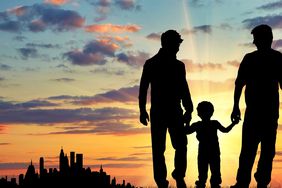