Taking turns doesn't come naturally to preschoolers, but you can help them to practice a little back-and-forth.

One lazy afternoon, I decided to engage my then 3-year-old daughter, Sasha, in what I thought would be some educational fun. "Hey, guess what?" I said. "You and your friend Sarah have three of the same letters in your names!" I wrote the names on a chalkboard, where Sasha eyed them suspiciously. "See, you both have S, H, and A," I explained, dreams of high verbal SAT scores dancing in my head. I was completely unprepared for what followed. "Nooo!" she screamed. "Sarah can't have my S or my A! They're miiiinnne!"

I was shocked -- was I really raising a child so incapable of sharing that she insisted on having the entire alphabet to herself? The answer is yes -- for me and every other parent with a preschooler. "We're born as social creatures, but learning to socialize -- and that includes sharing -- is something young kids need experience with," explains Allison Sallee, Ph.D., executive director of Tejas Family Guidance Center, in Austin. Here's why your child is so possessive -- and how you can make sharing easier.

Preschoolers Have Yet to Master Empathy

To a 3- or 4-year-old, ripping a ball from his friend's hands because he wants to play with it is no big deal. One reason for the grabbiness: "Many children are still figuring out how to place themselves in someone else's shoes, so your child may not realize that he's hurting another child's feelings by taking his toy," says Mary Zurn, Ph.D., vice president of education and professional development at Primrose Schools in Atlanta.

What to do Help your child learn to ask for what he wants and label his feelings in stressful situations ("Sam is sad that you won't let him have one of your crackers"). Then, mention a time when he felt sad himself ("Remember how upset you were when Sam took your car? Now he's feeling sad too"). "Make sure your child knows you expect him to use the words he's learned to express how he feels, so he'll be more likely to communicate and less likely to act out," says Dr. Zurn. And preempt conflicts by putting away a few toys he'd rather not share before playdates and offering activities that give everyone options, like coloring.

The concept of time, as in "Catherine can have a turn playing with the pony for five minutes," is completely lost on preschoolers. "To your child, relinquishing her toy to a friend for even a few minutes can seem like hours," says Dr. Sallee.

What to do Make time more concrete by using a kitchen timer. Tell your child that when the bell goes off, her friend gets a turn with the toy -- and then you'll set the timer again. When you're away from home, use the timer on your cell phone. Also look for opportunities to point out how time works in daily life. If you are heating up something in the microwave, explain that the food will be ready in two minutes when the buzzer starts beeping.

Kids This Age Have a Hard Time Controlling Their Impulses

Ever wonder why your child pushes his friend away from his play kitchen just seconds after you've reminded him to make room for both of them? He simply can't stop himself. "Often, 3- or 4-year-olds get caught up in the moment and won't remember to use their words, especially if they are out of their familiar surroundings or routine," says Dr. Sallee. Instead, they might express themselves by grabbing, pushing, or even throwing a fit.

What to do Children learn impulse control gradually, so try to limit your expectations. "The truth is, kids are still going to grab each other's toys, even when they're old enough to know they shouldn't. The best you can do is to model good behavior to help your child catch on," says Dr. Sallee. And don't worry -- even the most seemingly self-centered kids eventually come around. Not long after her meltdown over her name, Sasha decided that she and Sarah could share the alphabet -- as long as she got to keep the numbers 1 through 10. At least it's a little progress! 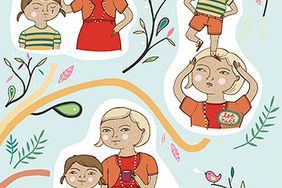 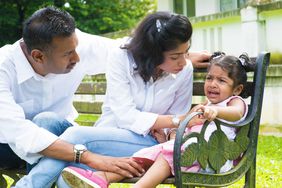 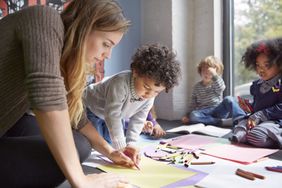 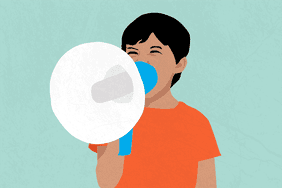