Family, friends and even strangers mean well when they remark on your daughter's looks, but wouldn't it be better if she heard something more meaningful?

While you know family, friends, and even strangers just want to give your daughter a nice compliment when they comment on her appearance, does it still make you cringe a little? After all, the last thing we want is for our little girls to think that looks are the most important thing. It may not seem like a negative thing for a girl to hear, but if adults are constantly telling her how pretty or cute she looks, as if it were the highest compliment, what kind of affect could that have on her in the long run?

According to Dr. Jill M. Emanuele, senior clinical psychologist and director of training at the Child Mind Institute's Anxiety and Mood Disorders Center, compliments like this are limiting to the child. "It could be interpreted by the child that you're defining her as that, therefore that's what her worth or value is," she says.

Multiple people giving the same appearance-based feedback throughout her childhood could suggest that her looks are the only thing that matters about her, Dr. Emanuele says, and that's harmful. Instead, she says, family and friends should reinforce the child's strengths beyond her looks. "There are so many other things that could be so valuable about the kid: the way she does things, the way she behaves, the way she smiles," she says.

13 Things You Wish People Would Say to Your Son Instead of, 'Aren't You Big?!'

Of course, when Uncle Mike says "Look how pretty you are!" to your daugher, he certainly doesn't mean any harm—perhaps he just doesn't know what else to say. In this case, Dr. Emanuele suggests remarking on something the child has control over, like her choices, behaviors, or accomplishments, and engaging with the child about who they are as a person and what they like.

"For girls, you could say, 'I really like the way you just shook my hand,' 'I like the way you're smiling at me,' 'Oh, you have a pink dress on,' or 'Oh, your hair is very long,'" Dr. Emanuele says. "And then you engage them in questions: 'Is that your favorite color?' or 'Do you like your hair that way?'" Ask the child what she thinks instead of inserting your own opinion.

"Sometimes you'll have a kid show you her shirt or the bow in her hair. Rather than, 'That's such a pretty bow. It makes you look pretty,' you can say, 'Oh, you're showing me your bow. Do you like your bow? What else do you have with you that you want to show me?' It gives them the message that they have more value than their bow."

We asked parents what they wish other people would say to their daughters. Check out their ideas, and then share yours in the comments!

"I wish that people would ask the simple question, 'What makes you happy?' To me, it is a conversation starter that can actually engage my daughter to discuss her interests, accomplishments, or dreams rather than focus solely on her appearance." — Cheryl Comeau-Kirschner

"'You look pretty clever... I bet you're pretty smart, aren't you?'" — @SherryArbonne

"I like when people compliment her on her smile and how happy she seems. I like when she spreads the joy!" — Ellen Bright

"Be specific, they had nothing to do with their looks. Compliment on the shoes they chose to wear today." — @maryhaak45

"I like when people relate to children in a similar way as they would adults. You might compliment a woman upon meeting her, [by saying] 'I love your outfit!' but I generally don't tell women how pretty they are when I am first talking to them. If I can't find something to say [to kids,] I just say 'Nice to meet you.'" — Jen Diamond

"I love when people say your children have such great manners. or 'You are such a big helper!'" — @bcsmomof3

"I would like them to ask her, 'What do you love about being you?' instead of posing their own judgement on her." — @MooreTwits

"I think the hard thing about an, 'Aren't you pretty?' question is that the asker isn't really expecting the kid to answer. On the other hand, 'I love your tutu/superhero cape/safari hat. What's the occasion?' is a great starting point." — Meghan Clay Hamilton

"'You look like you could fight crime today,' 'You did a great job choosing that outfit,' or 'My, aren't you smart, positive and self-reliant?!'" — @beheroesdotnet

"I don't mind a 'Don't you look nice today?' if they are dressed up for an event. But as an everyday kind of comment, rather than 'You look pretty' I'd like to hear 'Have great adventures today' or something that encourages their creativity or excitement about the day." — Kerry Neel

"I really love when people mention to her how confident she seems and how well she knows herself. She is and always has been very articulate with adults and I know that it continues to build her confidence when that is mentioned. She also has very short hair and really likes that about herself. As much as I don't think girls or boys need to be complimented on their appearance, i know that she really loves when random strangers tell her how much they love her hair. She likes that she doesn't look like most of the girls her age and likes when that is noticed and appreciated by people. Is that wrong? I can't say it is if it continues to reinforce that she knows herself and doesn't have to swim with the current." — Bethany Sanderson

"'You have a delightful sense of humour. Thank you for making me smile today.'" — @alycekom

Ellen Sturm Niz is a New York City-based editor and writer who loves when people tell her daughter she has a great laugh. Follow her on Twitter and Pinterest. 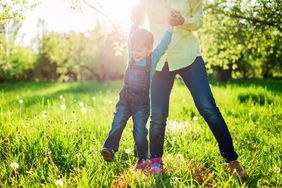