Walking isn't the only exciting motor skill your toddler will master. Help them run, jump, climb, and more with these expert-approved tips.

Parents get excited when their baby takes their first tentative steps, which usually happens within a few months of their first birthday, says Andrew Adesman, M.D., chief of developmental and behavioral pediatrics at Steven and Alexandra Cohen Children's Medical Center of New York, in New Hyde Park. But other motor milestones in toddlerhood can be even more exciting. Why? Because these achievements mean your child is becoming increasingly independent and expanding their capacity for play and learning.

Read on to learn about 10 physical milestones to expect during the toddler years. Also, don't panic if they aren't on track with the timelines listed here. All kids develop at different rates, and there's a wide range of normal. Bring up any concerns with your child's pediatrician.

Toy strollers and vacuum cleaners are fun to push around and will help your toddler get comfortable on their feet, says Parents advisor Wendy Sue Swanson, M.D., a pediatrician at Seattle Children's Hospital. Once they're a confident mover, pulling a toy (like a small cart on a rope) will help them learn to manipulate objects as they go, which will give them more independence and freedom to explore.

Is your toddler constantly trying to summit the bed or the dining room table? Climbing is actually an import physical milestone for toddlers. Encourage them to climb when you're there to watch them, says Michelle Macias, M.D., a developmental-behavioral pediatrician at the Medical University of South Carolina, in Charleston. To keep your toddler safe, childproof your home by anchoring heavy furniture to walls, keeping chairs pushed into desks, and always supervising them closely.

Squatting means your child's muscles are getting stronger and their coordination is improving. Don't underestimate this subtle skill in which your toddler stops, stoops down to pick something up, and then resumes walking. It means that your child is steady on their feet, which requires considerable balance. It's also a major move toward independence, since your child no longer needs you to grab toys for them. Toddlers tend to master the technique within three months of learning to walk, but there's no need to teach it. Simple play should do the trick.

After kids learn to walk, they want to sprint too. "Toddlers can go from walking to running in a matter of weeks or even days," says Dr. Swanson. Inspire your child to run by running after them and then having them chase you. Also help build their leg muscles by getting them to reach up for toys on their tiptoes. Play somewhere falling won't hurt, like on the grass.

Each time your child throws a ball, they're testing balance and agility while simultaneously honing hand-eye coordination. Take note of which hand they use to throw the ball. Around this age, children start to show left- or right-handed dominance. To help your child master this skill, it's best to think small. Play catch with beanbags, sensory balls (their nubby texture makes them easy to grasp), or a Wiffle ball.

Bopping to the beat means your child has discovered a fun way to challenge their body and is learning to integrate a variety of movements into sequences. Encourage your child to bust a move by playing their favorite tunes and introduce an egg shaker, a maraca, or a tambourine. Kids this age like to imitate what they see, so don't be afraid to bust out your own moves with them and groove to the beat.

To develop your future soccer star's skills, roll and kick balls in their direction. (Make sure you use a light, soft ball that won't hurt, like a Nerf ball, says Dr. Swanson.) If they have trouble balancing when they lift their foot to kick it back, have them hold on to a coffee table or your partner's hand while they take aim.

36 Questions to Ask Toddlers to Get Them Talking

This movement is surprisingly difficult for a toddler to master—largely because doing so engages the glutes and the quadriceps (which normal walking doesn't). Your toddler may figure out how to do it as early as 15 months, but don't worry if it hasn't happened by the time they turn 2. One fun way to encourage backward walking is by giving them a pull toy. It's hard to walk and pull a dog on a string beside you correctly, so your child will likely have to turn around and pull it toward their body. Pretty soon they'll start walking backward naturally as the toy comes to them.

This challenging activity engages a child's large muscle groups, and it requires strength and balance to shift from one leg to the other. Most toddlers begin learning by bending forward and putting their hands on the step above them, eventually advancing to holding on to a railing (or your hand) at 18 to 22 months. Your child will need to scoot down the stairs on their bottom until they learn how to descend on two feet. Safety on the stairs is a high priority, so use gates at the top and bottom, and never let your child practice unsupervised. If the possibility of a tumble makes you nervous, try this safer alternative: Let them experiment on the stairs of a small slide at a toddler playground.

Stop Asking Me About My Child's Milestones, Especially Now

Around their second birthday, your child might start jumping up and down when they get excited. To encourage them, try playing music: Some good tunes may get them bouncing along, says Dr. Adesman. Don't forget to hop to the beat yourself. Your kid might enjoy imitating your moves. 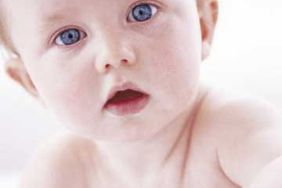 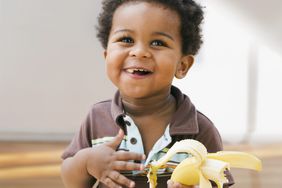