Look who's talking now -- or at least will be very soon. If you're wondering when your babbling tot will turn those coos and cries into mamas and dadas, here's what to expect when it comes to her language development.

Most toddlers will start talking some words by the age of one, with a real boost in vocabulary happening around 18 months. "Speech is the single most powerful way for a child to interact with her environment," says Heather Boerner, owner of Chatty Child Speech Therapy in New York City. Speech development is huge for a child's overall well-being because verbal communication will become a toddler's most powerful tool. "A toddler uses speech to request desired items, to protest actions, to engage socially, and to communicate effectively with everyone around them," Boerner adds. If a child cannot communicate verbally, he can easily get frustrated and even pull back socially if his verbal skills don't match what he is able to comprehend.

Before your toddler can chit chat, her cognitive and fine motor skills need to be ready. "In order to produce speech, a child must first be able to cognitively comprehend simple language. Then a child learns how to express his or her ideas verbally," Boerner says. "But there is also a speech motor component -- he or she needs to develop the ability to produce sounds as well."

While you're eagerly waiting to hear what your child's first word will be, there are things you can do to help with her development. According to a study conducted by Stanford University researchers and published in Psychological Science in 2013, toddlers who are exposed to more words at a young age have a larger vocabulary and better language proficiency later on. So don't be shy in speaking spirited, wordy monologues when you're with your child now, as they will lead to a boost in her banter later.

When to Expect Talking to Begin

Baby babble will start forming into words somewhere around 12 months, although the sweet sound of your child's first words may appear as early as nine months, says Kimberly Scanlon, a speech pathologist in Ramsey, New Jersey and author of My Toddler Talks. Initially, your toddler will be able to mutter only about four to six words, but at around 18 months, a real spurt in vocabulary will take place, and your Chatty Cathy's list of go-to words will increase to about 50. So why are some kids all talk but others seem to hold their tongue? "Every child's developmental trajectory is different," Boerner says. "Girls, in general, speak earlier than boys because they tend to mature quicker. And some children's strengths involve speech, while others involve more physical things." Just remember: All children have different core strengths.

So if you're itching to scribble your youngster's first word into his baby book, you may not have to wait long to see him becoming more verbal with his jibber-jabbering, mimicking conversations, and becoming more animated with pointing and gesturing when he sees something. Sometimes words may even come when you least expect them -- your solemn-faced sweetie may blurt "Cookie!" out of nowhere.

What Talking Milestones Parents Can Expect

Don't expect a whole lot of words at first. "When your child begins talking, expect some difficulty interpreting what she says," Scanlon says. "The first words are more like approximations of the actual words." In fact, children are not expected to be 100 percent intelligible until around age four. But some first common words are mama, dada, more, done, hi, bye, down, up, mine, and no -- with an emphasis on no, a real toddler favorite. "Toddlers are likely to say words that they hear frequently, are meaningful, serve a purpose, and help them meet their needs or wants," Scanlon says. Although speech may start off slow and sound a little sloppy, once your little one gets a few words under her belt, it won't be long before she's all talk. By 24 months, toddlers will be able to spout between 200 and 300 words and be little walking dictionaries.

Red Flags to Watch Out For

Before you go on a Google-search binge, it's important to remind yourself that each child develops differently. Just because little Bobby next door talks a million miles a minute doesn't mean your child is lagging. But there are still things you can keep an eye out for. Start a dialogue with your pediatrician and seek an evaluation from a speech language pathologist if you notice any of the following concerns:

- little or no sound play as an infant

- little to no eye contact or response to sounds

- lack of smiles by six months

- not pointing at objects of interest by 14 months

- not responding to her name by 15 months

- not saying any single words by 16 months

- initial verbal communication and then regression 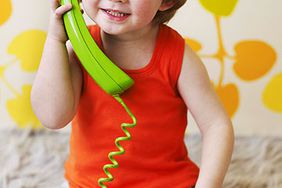