An age-by-age guide to setting limits.

Too Young to Discipline?

Your newborn cries, you pick him up. He's hungry, you feed him. His diaper is wet, you change him. Of course you cater to his every need. Baby care is hard enough; surely, you think, you don't need to worry about disciplining your little darling, right? But soon enough, baby gets a bit wiser, his needs morph into wants, and you find that you have to set a limit or two. Just how many times do you scoop the tossed pacifier from the floor or grin and bear the overturned cereal bowl?

We know what you're thinking: 1 or 2 years old is too young for punishment. Ah, there's the rub. Discipline isn't about punishment. It's about teaching and guidance, which can—and should—start in infancy's earliest stages.

"Setting limits is a critical part of your responsibility as a parent," says Claire Lerner, LCSW, director of parenting resources at Zero to Three, in Washington, D.C. You're helping your child to understand right and wrong, to follow rules, and to cope with frustration and disappointment. Of course, we all know that a baby who's "misbehaving" isn't doing so intentionally. When she tugs at your glasses, she's simply doing her job—exploring the world around her. "Babies are constantly making observations about the world," says Harvey Karp, MD, author of The Happiest Toddler on the Block (Bantam). "She mushes her food to see how it feels. She drops something from the high chair to see how it splats."

So how do we keep her from breaking another pair of glasses without putting the kibosh on her world of discovery? Here are some sanity-saving, and, yes, discipline strategies, for newborns to 2-year-olds.

In general, you can't spoil a child in the early months, Lerner says. Infants need to feel safe and secure, and meeting their every need actually helps them become independent later on. When they develop a sense of security in their own little world, they're able to venture outside of it, knowing they won't get hurt. Dr. Karp puts it in perspective: "Holding him for 18 hours a day may seem like a lot from your perspective, but to a baby who was being held 24/7 in the womb, it's still a 25 percent rip-off."

Discipline at 4 to 7 Months

The Big Issues: Grabbing and Tugging

At this stage, you can start differentiating between needs and wants. "Your baby might want to fall asleep on your shoulder, but he doesn't need to," says Jane Nelsen, EdD, coauthor of Positive Discipline: The First Three Years (Three Rivers Press). "He needs to learn to fall asleep on his own."

Likewise, babies this age start to grab at everything. It's their way of exploring and learning what their hands can do. An agitated reaction—a stern "No" or an "Ouch" (if he's got your earring)—will only make it more fun for him. Instead, give him your poker face. When Nelsen's grandson started to grab her glasses, she simply put him down for a few seconds, saying nothing. Baby can't control his impulses now, but you're setting the stage for later on.

Teething can also have an effect on behavior. When Sharon Alworth's son started to bite while breastfeeding, the first instinct of the Florence, Massachusetts, mom was to scream. Instead, she pushed the 6-month-old's nose close to her body, and he let go. It took a while for the biting to stop, but in time he learned that if he wanted to nurse, no biting allowed.

Discipline at 7 to 12 Months

The Big Issues: Movin'—and Getting into Trouble

If you haven't already, start childproofing your house—put anything poisonous out of reach, install gates, and cover light sockets. But also provide plenty of safe places for your more mobile baby to explore. If you're constantly saying no, you're sending a message that the world is off-limits. Leave a latch-free cabinet filled with wooden spoons and plastic bowls, and put board books and puzzles on low toy shelves. If baby does get into trouble, distract and redirect. Say, "I know you want to pull on that lamp cord, but that will hurt if it falls. Let's play with your trains instead." Marissa Privilegi, of New Hyde Park, New York, changes her tone of voice when her 8-month-old gets into something she's not supposed to. "It doesn't always work, but eventually she'll get it," Privilegi says.

Separation anxiety often crops up at this time as well, which makes for a clingy baby. Encourage her to occupy herself. If she starts to scream when you disappear to do laundry, don't immediately run back, which signals to her that there really is something to be upset about. Instead, reassure her with your voice. Say to her, "Mama's in the laundry room; it's okay."

The Big Issues: Discovering Vocal Abilities Such as Screeching and Whining

If you thought your infant had a good set of lungs, just wait till he's a toddler. It may be cute when he shrieks at home, but it's not appropriate in church or at a crowded restaurant. To keep your sanity intact, remember that your child isn't trying to ruin your dinner; he's only testing his vocal cords. Resist the urge to yell—or giggle, because sometimes it is funny when he screams in church. That will only egg him on. Instead, tell him in simple terms what you expect: "We talk in a quiet voice when we're in a restaurant." Bring quiet toys and books to occupy his attention. If he can't stop shrieking, take your order to go. "Children this age don't have the self-control to inhibit a behavior like this," Lerner says. "Just keep explaining the rules, and by age 2 1/2 to 3, he'll begin to understand them and be better able to act on them."

To put a stop to the whining of her 18-month-old son, Harrison, Hillary Landau, of Briarcliff Manor, New York, made a game of it: "I'd say 'What do you get when you whine? Zippo the hippo!' That broke the tension and made him smile, plus it made it clear that whining would get him zip!"

The Big Issues: Autonomy and Rebellion

Children have a real explosion of language at this age, but because they still can't articulate their feelings, they often get frustrated, says Aditee Narayan, MD, MPH, a pediatrician at Duke University Medical Center, in Durham, North Carolina. Lend a hand. Or a mouth. If she's throwing a tantrum because she can't reach her Elmo blanket, put words to her feelings: "You must feel frustrated because you can't reach your Elmo blankie. Let's see if we can get it for you."

Hitting and biting can also crop up now—again, as a result of frustration. If your child bites someone, remove her from the situation immediately, saying, "No biting; that hurts." To prevent future incidents, look for patterns: does your child bite at a particular time of day? Does she hit when she's frustrated?

Hitting and biting can also crop up now—again, as a result of frustration. If your child bites someone, remove her from the situation immediately, saying, "No biting; that hurts." To prevent future incidents, look for patterns: does your child bite at a particular time of day? Does she hit when she's frustrated?

When your child starts acting rebellious, distraction is key. My 2-year-old always wanted to buckle his own seat belt -- an exercise in frustration for me. My brilliant solution: singing! "This is the way we buckle our seat belt, buckle our seat belt, buckle our seat belt." Ethan became so enrapt by my melodic voice (ahem) that he now asks me to sing every time we get into the car—and he lets me buckle him up. If distraction fails, capitalize on your toddler's love of pretend. When your son won't pick up his toys, use your best bear voice and say, "Oh, Tommy, will you help bear clean up the train set? He doesn't know where it goes!"

Whatever you do, keep at it. One thing is constant with kids: They're always changing.

Is It Ever Okay to Spank?

What's Wrong with a Little Swat?

Some parents think it's okay to swat a kid on the hand or the bottom. After all, many of us got spankings, and we turned out just fine, right? It's not as simple as that, experts say. First off, as your child grows, that little swat won't stop him, and your aggression will only have to escalate. Also, children learn by imitating us, so if you hit, they'll come to learn that hitting is an acceptable way to deal with frustration. Finally, hitting doesn't truly teach anything. Sure, your child may listen, but that's out of shock and fear. Instead, you want him to develop an inner sense of right and wrong, and hitting simply doesn't teach that.

All content, including medical opinion and any other health-related information, is for informational purposes only and should not be considered to be a specific diagnosis or treatment plan for any individual situation. Use of this site and the information contained herein does not create a doctor-patient relationship. Always seek the direct advice of your own doctor in connection with any questions or issues you may have regarding your own health or the health of others. 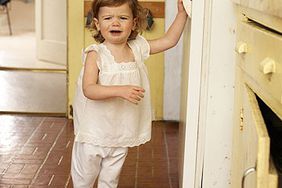