Your kid's unpredictable antics will make a lot more sense if you look at life her way.

Take a second to imagine your toddler's mind-set: Everything is new and unexplored, she has little self-control, and her vocabulary is limited to maybe a hundred words. At any given moment, life can be exciting, frustrating, unpredictable, or downright scary. As a mom and a pediatrician, I've gotten plenty of practice understanding toddlers' unique perspective, and I find that I've become a better doctor -- and a better parent -- in the process. So let me help you don some toddler goggles of your own, so you can see exactly what your child sees.

The Toddler View: "I want something, so I need it!"

When my then 2-year-old daughter opened the gift I had wrapped for her friend -- after I'd specifically told her not to -- I was upset. Was she blatantly ignoring me? Not exactly. Toddlers crave things with such passion, they feel they absolutely must have them. My daughter had to have that gift, and didn't have the mental maturity to ignore her impulse to unwrap it.

A toddler's brain hasn't yet developed executive function -- the ability to focus, exhibit control, and listen to reason. In other words, there's no conductor in the orchestra of her mind. So my daughter couldn't grasp that the gift was not hers and that she should resist opening it.

In the famed "marshmallow study" at Stanford University, researchers offered a marshmallow or a cookie to a group of young children and told them they could eat it now or have two treats later. The majority of the youngest participants, 3 years old, ate the treat right away or failed to understand the directions, while some 4- to 6-year-olds were able to wait by distracting themselves.

You can help teach your toddler realistic self-control strategies. For example, find opportunities to have her wait her turn on the swings. Keep the wait time short and show her ways to amuse herself in the meantime. But don't set unrealistic expectations; asking your 2-year-old to leave a treat untouched is just setting her up to fail. Put the temptation out of sight instead.

The Toddler View: "I have to see and hear everything."

Remember when your child instantly spun around to you when you said "cookie," even though you thought he wasn't listening? Toddlers have an incredible ability to pay attention to all the details around them. It's their superpower! Adults naturally filter out extraneous information, like an interesting pattern of shadows on the sidewalk, but toddlers don't know what's most important. There's actually a biological basis for this: Young children have fewer inhibitory neurotransmitters, the chemicals that prevent neurons from firing, so their brain is constantly exploding with stimuli. It's similar to what you see when you visit an exotic new location: Your attention is overtaken by new sounds, smells, and sights.

This "super-attention" is critical for learning, but it can be distracting for a child -- and sometimes it can be frustrating for you. You may feel better knowing that one reason your toddler likes you to read the same book over and over is because when he hears it again, he isn't distracted by as much new information.

In experiments at the University of Sussex, in England, researchers discovered that young children learned new words when exposed to them in the same stories read repeatedly; they failed to learn those words when exposed to them in different stories. So while you may have your child's favorite book memorized, he's still delighted by the new sounds and words he's uncovering with each repetition.

The Toddler View: "I see things one way, and one way only."

You're playing hide-and-seek, and your little one has his head behind the curtains, but his feet are sticking out. He's convinced he's well hidden because he thinks you both see the same thing. Toddlers are still learning that there are different points of view.

They also have trouble trying to imagine another complicated type of point of view: the future. So your 2-year-old isn't able to picture what it means when you say, "We're going home in five minutes." That's why he'll be surprised when you march him out the door five minutes later. Instead, tell him how you're leaving: "We're putting on our shoes and giving our friend a hug and then we're walking to the car." Don't bother telling him why you're leaving, because he only cares that his fun is coming to an end. However, you can mention that Dad is waiting, to set the stage for developing sympathy for others.

The Toddler View: "I need your attention. At any cost."

A kid's whiny requests can exhaust any parent by the end of a long day. So why does your child whine (or throw things, or kick you)? From her perspective, it works! Whining is super-effective for an attention-loving toddler -- it gets you to turn around and focus on what she's saying. If you ignored her three previous requests to be held while you were cooking dinner, she neither understands nor cares. She resorts to whining because it gets you to respond.

Toddlers also don't care whether they get attention for good or bad behavior. In the pediatric-emergency room where I work, parents will occasionally come in concerned that their child has "seizures" or a "muscle problem" because of a repetitive behavior, such as eye-rolling or head-shaking. But I wear my toddler goggles to work every day, and I see that in many cases the child has simply found an action that gets her parents' attention, which she loves, so she keeps doing it.

When your child misbehaves, try your best to ignore her (unless she's in danger, or hurting someone, of course). If you can't blow it off, move her away from the situation or distract her. This sends the powerful message that you aren't going to respond to negative behavior. Just be careful not to accidentally reward bad behavior. For example, if your child is interrupting you while you're on the phone and you hang up to deal with her behavior, she's gotten exactly what she wanted. Try to predict her need for attention and look for opportunities to encourage her cooperation. You just might be able to squeeze in a three-minute phone chat if you give your toddler a few reassuring words and kisses while you're on the phone.

The Toddler View: "You should be able to read my mind!"

Your little angel asks for a cup of water, and just as you hand it to him, he screams "No!" and bats it away. Why the freak-out? When he asked for "water," he wanted the Jake and the Never Land Pirates cup with the straw that you gave him yesterday, not the green sippy cup. What's wrong with you?

For toddlers, language issues are often the cause of emotional upsets. The cup scenario is a classic example. Your son expected exactly what he got last time, but he simply didn't have the vocabulary to ask for that particular cup. And even though he didn't react politely, it actually makes sense in this case to give it to him. Look at it this way: You're meeting your child's need, now that you've figured it out, and you might even be preventing a further meltdown.

Toddlers do read faces pretty well, so use both your voice and your language to convey your message. And pay attention to your child's nonverbal cues -- such as tilting his head when he doesn't quite understand what you've said -- at least as much as his words; the results may enlighten you.

My final piece of advice: Instead of spending your energy cleaning up every last mess and worrying about discipline, embrace the toddler perspective more often. You may actually discover a more creative side to yourself and a more cooperative side to your toddler.

Originally published in the May 2015 issue of Parents magazine. 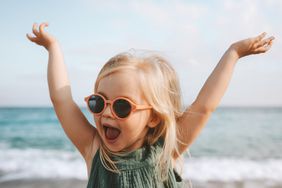