Awareness of people's feelings may start at a young age.

Studies show that around 2 years of age, children start to show genuine empathy, understanding how other people feel even when they don't feel the same way themselves. And not only do they feel another person's pain, but they actually try to soothe it.

A sudden burst of sweetness out of a child whose mantra has been "mine, mine, mine" for most of her life may make it seem like your child's empathy switch just clicks on one day. But acquiring this rather sophisticated social skill doesn't really happen overnight. Here are the early signs of empathy:

Infancy: As hard as it may be to believe that empathy starts this young, the foundation for compassion actually seems to be part of our biological wiring. A case in point: In baby nurseries, one infant's crying is likely to prompt others to follow suit. The sounds other humans make attract newborns, so they become distressed when they hear the wails of another person. Of course, they can't say "I feel for that other baby," but behaviorally, that's what they're doing.

6 to 8 months: The charming flirtatiousness that babies exhibit around this age shows that they're beginning to understand that they are people, separate from their parents, a crucial milestone in interpreting other people's feelings. These coy grins designed to elicit a smile are how your baby demonstrates that she understands how behavior elicits reactions and emotions.

12 to 18 months: Right around their first birthday, children start "social referencing" -- looking to their caregivers for information. They learn that facial expressions speak for different emotions. And at around 18 months, children exhibit the ultimate precursor to empathy -- understanding that other people have feelings different from our own. In one study, a group of 18-month-olds were offered crackers or broccoli -- and most of them preferred crackers. Then they were set up with a with a group of adults who made "yucky" and "yummy" faces for both foods. The upshot: Toddlers who saw the adults make a yucky face for crackers and a yummy face for broccoli gave them the broccoli, even though the kids preferred the crackers.

It's important to remember that while your child is learning to be empathetic, he's also learning to assert his independence and communicate what he wants. This developmental combination can result in empathetic behavior one moment and aggressive behavior the next. So while your 18-month-old may offer you a hug when he thinks you're sad, he may also smack his playmate to communicate that he wants her toy.

The good news is that you can use empathy to help curb aggressive behavior. By encouraging their children to be aware of other people's emotions, parents are not just warding off teeth marks. Empathetic children often grow up to be compassionate adults, the caretakers of a hurt world. Here are four ways to foster your child's sensitive side:

1. Show them the world. Being empathetic starts with being sensitive to what's going on in the world around us. Showing your kids how you interact with others nurtures a desire to explore relationships.

2. Encourage communication. A toddler's vocabulary and ability to comprehend a wide range of feelings are limited, so you need to verbalize emotions for her. For example, if your child's trip to the zoo is canceled, you could say, "I can tell you're disappointed. I also feel that way when my plans are canceled." You can also point out feelings in others. If you see a boy sitting alone at the park, you could say, "He looks lonely. I hope he makes a friend."

3. Role play. Creative role-playing with puppets or dolls is a wonderful way for children to investigate others' feelings. If you want to explore envy, for example, have one puppet receive a gift while another gets nothing. Then ask your child how the puppet without a present feels. Role-playing is also a good way to teach kids how to offer comfort to others.

4. Temper your expectations. Empathy is very much a work in progress for toddlers. Some children understand it without much effort; other kids need more practice. Don't forget that egocentrism is normal for a toddler. They can't be empathetic and unselfish all the time.

Sources: Alison Gopnik, PhD, a professor of psychology at the University of California at Berkeley and coauthor of The Scientist in the Crib (HarperPerennial); Sharon Ramey, PhD, coauthor of Right from Birth (Goddard Press). 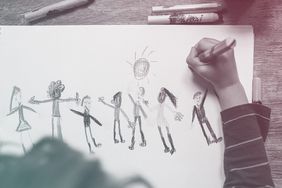