Why won't your 3-year-old put his toys away? Um, because he's 3! Check out other behavior goals you might need to rethink.

Recently, my kids, ages 2 and 3, had an absolute blast as they chased each other around trees and launched toy cars off a retaining wall. The problem? The point of our trip to Omaha was to be inside -- not outside -- the church where my godson was being baptized. Thankfully, my brother came out to watch the children so I could play my part in the ceremony. But I still felt embarrassed that he had to miss some of the baptism because my children just couldn't sit quietly.

Of course, it's perfectly reasonable for me to wish that my kids would be able to contain themselves for an hour, but the truth is, that's simply not in their skill set yet. "The part of a child's brain that controls his impulses and emotions matures very, very slowly," says Ross A. Thompson, Ph.D., a child-development researcher and professor of psychology at the University of California, Davis. "It's easy to assume that kids are being uncooperative or obstinate when really they're just acting their age." (Note to self: Next time arrange for a sitter.)

One reason parents often have unrealistic expectations is because a young child's behavior isn't consistent or predictable from day to day (or even moment to moment). Her attention span, ability to entertain herself, and inclination to play nicely with others depends on her mood, her level of fatigue, and a host of other factors. "Plus, parents aren't informed about what age-appropriate behaviors are," says Alan E. Kazdin, Ph.D., director of the Yale Parenting Center and Child Conduct Clinic, in New Haven, Connecticut. "Practicing together, rather than explaining, is the best way to help a child build new habits." Doing some trial runs at our own church, therefore, probably would have worked much better than, say, discussing the significance of a baptism with my kids.

So how do you know when it's you who needs the attitude adjustment? Discover how realistic (or pie-in-the-sky) these common wishes are and learn ways to help your child work toward mastering them -- eventually.

The Expectation: Your 2-year-old can resist the temptation to play with the dog's water dish.

The Reality: More days than not, it's bound to be splash city.

The Fix: Recognize the lure -- water's fun! -- and find a substitute for it. Put a towel on the floor and let your child play with some water in plastic cups or containers, or give her extra tub time at night, suggests Kathy Hirsh-Pasek, Ph.D., author of A Mandate for Playful Learning in Preschool. The trick for teaching her to steer clear of the dog's bowl: Be consistent. Say, "No, this is the dog's water," as you divert her attention with a toy or an activity.

The Expectation: Your 3-year-old will put his toys away without being reminded 100 times in a row.

The Reality: He puts a few blocks in the bin, then starts playing again.

The Fix: It's difficult for a young child to resist playing with his toys. So you'll have to join in. Be sure to enthusiastically compliment your child when he puts even one toy in its proper place. "By showing him how things are done and praising him when he accomplishes a task -- however limited it may be at first -- you'll help him develop good habits," Dr. Kazdin says.

The Expectation: Your 2-year-old will occupy himself for two minutes while you go to the bathroom.

The Reality: You no sooner slip away than he's toddling right behind you, demanding to join you.

The Fix: The more you resist letting your child come with you, the more clingy he's likely to become, Dr. Thompson says. So instead, play cars or puzzles with him for a few minutes. Then tell him that you need to go to the bathroom and will be back very soon. When you're finished, return to him as promised (don't stop to check your e-mail). Give him a pat and thank him for playing nicely while you were gone. If you need to get a chore done at home, play with him a bit more and then explain your plan. Stay within his sight if possible, and check in with a hug or more praise after a little while.

The Expectation: Your 3-year-old will quietly sit and color at a restaurant until your food arrives.

The Reality: She flings sugar packets, drops utensils, and occasionally shrieks like a banshee.

The Fix: Make the restaurant as homelike as you realistically can. Dine at about the same time you usually do, skip uncomfortable dress clothes and shoes, and perhaps even bring your child's own cup, plate, and utensils. Also, consider your kid's personality: Crayons and paper might occupy some preschoolers for a while, but yours might need a sack filled with toys -- not to mention a few walks around the restaurant. In any case, choose only kid-friendly restaurants until your child is at least 4, says Jane Kostelc, a child-development specialist with Parents as Teachers, in St. Louis.

The Expectation: Your 5-year-old will sit in a theater and watch a kids' movie from start to finish.

The Reality: She loses interest 15 minutes in (or gets scared!).

The Fix: First, make sure the topic really appeals to her. Even a film geared toward children can involve a complex plot, so whisper comments or help make connections for her, Dr. Thompson says. Pick a flick that doesn't last longer than 90 minutes. And since previews can be loud or scary, use that time for a last-minute bathroom trip.

The Expectation: Your 4-year-old will share nicely with his friends.

The Reality: You're breaking up more fights than a WWF referee.

The Fix: Preschoolers are still learning the idea of empathy, so it's tough for them to grasp that a friend wants that truck just as much as they do. When things go well, speak up, spelling out exactly what you admire, Dr. Hirsh-Pasek says. This will increase the chances it'll happen again. At the same time, don't intervene at every hint of a skirmish. "While you want to prevent things from escalating too far, resist the first impulse to jump in," Dr. Thompson says. "Four-year-olds can often work things out themselves." Not happening? Try using your oven timer. Say, "She gets the puppet for two minutes, then it's your turn." Kids this age understand and expect fairness. And before the next playdate, consider putting away the one or two toys that he really doesn't want to share.

What You Should Expect

These are some of the tasks your child ought to be able to master -- with your help. "The more encouragement you show, the sooner he's likely to accomplish these skills," says child-development specialist Jane Kostelc.

Put on shoes (with hook-and-loop tape)

Carry lightweight dishes to the sink (with occasional spills)

Put dirty clothes in the hamper, and (maybe) sort lights from darks

Get dressed with minimal help

Climb into her car seat and close the top clip

Water a plant with supervision

Pump his legs on a swing

Get dressed (barring any tricky snaps or buttons)

Pour cereal and milk without spilling (much)

Make the bed with help

Set the table with plastic dishes and utensils 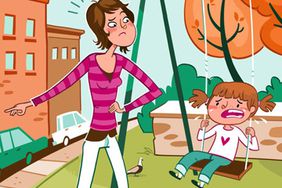