Whining can be challenging behavior, but knowing how to handle it can help turn the situation around.

Debby Waldman is passionate about mental health, hearing loss, books, food, and family, and she's written about those topics and more for publications including The New York Times, Washington Post, People, Parents, Publishers Weekly, Wired, The Bittman Project, and NBC-Think.

Almost from the time my daughter Elizabeth could speak in sentences, she whined when she didn't get what she wanted: my attention, a snack, a repair job on a faulty toy. When she turned 3—and suddenly seemed like such a "big girl"—her continued whining started to drive me crazy. I'd mutter angrily under my breath, clench my teeth, and even whine back. Once I even lost control and yelled so vehemently that she burst into tears. But more often than not, I'd let her have her way just to make the shrill sound stop.

Like nails on a chalkboard, whining—an irritating blend of talking and crying—has the ability to make almost any parent get angry or give in. And preschoolers are pretty smart. They know that pleading in that pitch has a strong effect on their parents, and if the behavior has helped them get what they wanted in the past, they're more likely to try to repeat it in the future.

While whining can seem like manipulation, it may be helpful to instead consider why kids whine. A whiny child isn't being annoying or acting spoiled deliberately. Whining is often the default way that young kids can express themselves when they're tired, cranky, hungry, uncomfortable, or just don't want to do something.

Although 3- and 4-year-olds' language skills are rapidly improving, they still don't have the vocabulary to describe all of these feelings, explains Michele Borba, Ed.D., author of Parents Do Make a Difference.

What Not to Do When Your Child Whines

Even when your child is able to articulate that they are hungry for lunch or hate sitting in the car seat, for example, they may still whine because they have learned from experience that whining means you'll pay attention. "For 3- and 4-year-olds who are testing the limits of their independence, whining makes them feel very powerful," says psychologist Carolyn Crowder, Ph.D., co-author of Whining: 3 Steps to Stopping It Before the Tears and Tantrums Start.

"If you can't stand whining, your child will do it even more, simply because it gets a reaction," agrees Jane Nelsen, Ed.D., co-author of Positive Discipline for Preschoolers. Even scolding your child can reinforce the behavior. "Kids just want a response. When they don't know how to get a positive response, they'll go for a negative one," Nelsen explains. And needless to say, giving in ("OK, you can have one piece of candy, but promise you'll eat your lunch?") doesn't work either. You might get a respite from the whining, but you'll perpetuate the problem.

How to Respond to Whining

Fortunately, you can break this pattern—in a way that encourages your child's development rather than punishes them. "When you stop getting frustrated by the whining, your child will stop too," insists Nelsen. At first, this laissez-faire approach seemed completely unrealistic to me. But because my daughter was a whine connoisseur, I decided to try it.

It wasn't easy—often I was tempted to yell or just give her what she wanted—but I was determined to be firm and consistent. "You have to exercise a lot of self-control," acknowledges Dr. Crowder. But remember: You're asking your child to do the same.

To my amazement, within a few weeks, Elizabeth had gotten into the habit of asking nicely instead of nagging. To help turn your whining experiences around in a similar way, here are four strategies you can try next time the whine comes to town.

1. Refuse to let it bother you

Pick a calm, quiet time to tell your child that there's a new rule: If they whine, you won't respond. "From then on, whenever he whines, keep your facial expression absolutely neutral," Borba says. Calmly remind them that you're there to listen and help when they use their regular voice. You might also ask them to choose a signal for you to use as a warning sign when they're getting into whining territory, such as pulling on your ear, suggests Nelsen.

2. Make sure your child knows what "asking nicely" means

It might be hard to believe, but your child may not even realize that they are whining—or they may not truly understand what whining is. The best way to explain it is to record both whiny and regular voices and then play them back. (Make it clear that you're using the tape to help your child learn, not to make them feel bad.)

You may also have to teach your child the specific words to use when they want to tell you how they are feeling, such as being tired, hungry, bored, or frustrated. "Kids really want to do what's right," Borba says. "But too often, we mistakenly assume that they know what's right. When you show them, they have a model to copy."

There's no reason to wait for the whining to come up; certain situations can be anticipated and avoided. Look for patterns and factors that lead to whining, then discuss them in advance. If your child tends to whine at the store, for example, give them a gentle reminder before going that whining isn't acceptable. To reinforce the point, ask your child to repeat the reminder by saying, "What is our rule for the store today?"

4. Give praise where praise is due

"Parents always point out, 'That's not a nice voice' but often don't provide enough positive reinforcement," says Borba. You might say, "Thanks for using your normal voice" or "My ears love that voice."

This approach worked wonders for my daughter. Whenever she asked for something politely, I acknowledged it and thanked her. At first, I felt awkward being so effusive, but her whining decreased dramatically.

"Many parents say, 'I tried it yesterday and it didn't help,' " Borba says. "But think of changing one of your own habits: It won't happen overnight." You need to be consistent and stick with it over time. If you don't, your child will realize that you'll eventually give into their whining. I noticed a change in Elizabeth within a month. Some kids may take more time, others less.

So keep at it. If you don't help your child practice effective methods of communication, the whining may get worse and affect future relationships. More important than how others perceive the whining is how continuing the behavior might prevent your child from learning other, more useful strategies for communication. "Keep in mind that your goal is to help your child be the best they can be—and the time that it takes will be well worth it," Borba advises. 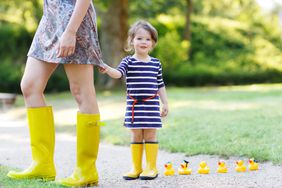