Should parents ignore them—or be concerned?

Habits such as thumb sucking, hair twirling, and headbanging are very common among children. And while these habits are usually harmless, they can be alarming to parents. Read on to help determine if your child's habits are merely irritating or cause for genuine concern.

Thumb sucking is an extremely common habit. In fact, some experts believe that as many as 90 percent of kids do it at some time during their early life. Thumb sucking is not usually problematic unless it goes on for an extended period of time. According to the American Academy of Pediatrics, more than half of thumb-suckers stop by age 6 or 7 months. Most other children give up the habit by age 4 or 5 years. Thumb sucking becomes a cause for concern when it continues beyond age 4 or 5. At that point, dentists worry that thumb sucking will affect a child's palate and teeth. In addition, the child may begin to hear negative comments about the habit from peers and family members. To end the habit, it's important that your child be interested in giving up the thumb. Gentle reminders and positive reinforcement (rewarding your child when she goes without sucking for a period of time) often work best. If not, coating your child's finger with a bitter substance or covering it with a bandage can remind her not to suck. Above all, be patient with your child's attempts to quit, and contact her pediatrician for advice when necessary.

Rocking and headbanging—the rhythmic hitting of the head against a wall, crib, or other surfaces—are particularly frightening to parents because many associate these actions with emotional or developmental problems. While rocking and head banging can be a sign of a problem such as autism, they're also quite common among children who are developing normally. The habit is most prevalent in babies between 6 and 18 months old. If head banging continues beyond age 4, or if you are concerned about it before then, consult your child's pediatrician. Also, talk to your pediatrician if your child's head banging is accompanied by developmental delays and a lack of interaction with parents.

Often beginning between 3 and 6 years of age, hair twirling is normally a harmless thing that children do to soothe themselves without even realizing it. Some kids do it as a way to relax themselves when they are tired or bored. Talk to your pediatrician if your child goes beyond hair twirling to pulling out her hair (or eyebrows or eyelashes).

Nail-biting usually develops later than some of the other habits—usually around age 5 or 6. Stress isn't always the cause of nail-biting, but stressful situations can cause nail-biting to increase. Try distracting your child or keeping her hands busy during times she is likely to bite her nails (while watching TV, for example). Also, keep her nails cut short and wash her hands frequently with antibacterial soap to ward off infection. 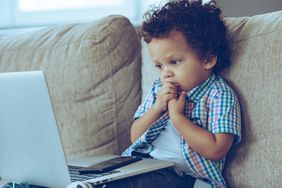 Toddlers' Strange Habits: When to Worry