How to avoid a battle when it's time to change activities.

Transitions -- putting the brakes on one activity and starting right up with another one -- are tough on toddlers. Bedtime may be one of the hardest, but others, such as leaving the playground, having to stop playing to get in the car for errands, or being left in a babysitter's care as Mom and Dad walk out the door can also elicit tears and tantrums. After all, toddlers live in the moment, don't have a real concept of time, and are only just beginning to understand that separations don't last forever, says Gail Reichlin, executive director of the Parents Resource Network in Chicago.

On top of that, they don't have the language skills to say, "I'm right in the middle of something. Just give me five minutes." Instead, they often resort to tears or tantrums when told it's time to stop what they're doing. Temperament also plays a part in how your little one handles transitions. Some children, just like some grown-ups, oppose anyone who wants them to make a change.

Yet learning how to make transitions is an important developmental step. Everybody needs to learn how to bring one activity to a close and invest attention in something else, says Kathleen Grey, a family development specialist at the Center for Child and Family Studies at the University of California at Davis.

Of course, not all transitions call for the same plan of attack -- the solution for the stalling depends on the specific situation. Here's a roundup of strategies for trying to get your toddler moving when he digs in his heels.

1. Give advance warning. You can't expect kids to stop what they're doing on a dime. And time is a blurry concept to toddlers, so "We have to leave in 10 minutes" is not meaningful. If your child is engrossed in his play, but you need to take him with you to the store or to pick up an older sibling at school, start preparing him in advance. Set a timer to ring five minutes before you want your child to get ready, Grey suggests. Tell him that when the bell rings, it'll be time to go. And while you're waiting, say something like, "When you hear the bell ring, I'll help you put on your shoes and put the puzzle away, and then we'll get into the car and go to the grocery store." When the bell goes off, reiterate that it's time to get ready to go.

If a timer isn't an option (you're at the playground, for example), use references relevant to your child: "I'll push you on the swing 10 times, and then we have to go."

2. Develop rituals. To make transitions that involve separation, such as being cared for by someone else, the predictability of a set routine gives a child a sense of control and order. When dropping your child off at day care, you might give her three kisses and then ask for three in return, or read your child two books before walking out the door -- whatever works to help your child predict what's going to happen next.

3. Keep your language simple. Making your words brief can short-circuit power struggles. Rather than explaining why your toddler needs to come to the dinner table, try kneeling down right in front of her and whispering a one-word description of what she'll be eating. All a child needs to hear is "soup" or "spaghetti" and she'll probably be happy to put the toys aside and move on to her next activity -- mealtime.

4. Offer choices. Presenting your child with options gives him lots of room to cooperate. But don't give too many, and make sure that the choices are not whether to comply, but how to comply, Grey says. For example, don't say, "Do you want to put on your shoes?" if "No" isn't an option. Instead, you might say, "Do you want to wear shoes or sandals?"

If your toddler refuses to budge, you might ask him if he wants to walk to the car or wants you to carry him.

5. Avoid making threats. Counting down ("If you're not on your feet by the time I count to 10... ") or threatening a time-out doesn't work because both back a child into a corner, putting him in a position of losing face, Grey says. Either he has to back down or lose your love and approval, which is a big thing to ask of a young child.

First, tell her in a calm voice that it's time to go, using short, simple sentences. Put your hand on your child's shoulder, or take her hand gently and guide her to where you want her to go. If you've given it your best shot and your child is still balking at stopping his play, try saying, "I can see that you don't want to come along. I'm going to help you now. I'm going to pick you up and carry you."

6. Get down to your child's level. It tends to be very effective when you veer away from arguing and simply change your tone of voice, Reichlin says. Rather than running after your child holding the shirt you want him to put on and telling him to be still, get down on one knee and lower your voice to a whisper. Tell her very softly what you would like her to do. She may be so surprised that she'll willingly switch gears and move on to the next activity.

Helping your toddler learn to make transitions smoothly pays off in the long run. It's doubtful that he'll ever grin broadly as he drops his toys into the sandbox and hops into his stroller to go home for a nap. But with patience and diplomacy, you can help him take a few steps forward. 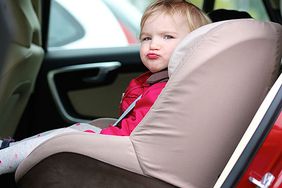