Bubble tea, a trendy Taiwanese drink, is popular across the U.S. But with concerns about added sugar, caffeine levels, and digestive safety, should your kids sip away or steer clear?

A fun drink that can brighten nearly any day, bubble tea is popular across the country. But with concerns about high sugar content, caffeine levels, and digestive safety, is it safe for kids and teens? As with most beverages, it's important to know what's in your cup, so read these facts before visiting your local bubble tea shop.

What Is Bubble Tea?

So what exactly is bubble tea? The beverage typically consists of a scoop of tapioca "pearls"—or black chewy balls made from the starchy cassava root—at the bottom of a cup. Cold tea is poured on top and mixed with things like milk, fruit, or other flavorings. It's served with a wide straw so you can suck up the pearls (and chew them) while drinking the tea.

Bubble tea was originally invented in Taiwan in the 1980s, though the exact origins are somewhat disputed. It eventually gained traction and grew in popularity throughout the world.

Today, bubble tea comes in dozens of bright colors and fun flavors like passion fruit and caramel, and it has legions of devoted fans. The popular drink can be found everywhere from tea shops to supermarkets (even Trader Joe's sells an instant boba tea kit), and it can be made at home.

Bubble tea contains some natural ingredients (like tapioca), but the nutritional components aren't ideal. A 2017 report published in Food Science & Nutrition found that a 16-ounce serving of the beverage typically contains about 300 calories. But it's not uncommon for the biggest sizes to clock in at more than 500 calories—about a third of what a young child needs in a day.

Bubble tea can also pack a lot of added sugar. The Food Science & Nutrition report estimated that a 16-ounce serving contains roughly 38 grams of sugar, though the exact amount will vary based on chosen flavors and additives. This is concerning because the American Academy of Pediatrics (AAP) recommends children 2 years and older consume less than 25 grams of added sugar each day; children under 2 should avoid added sugar altogether. "Kids who drink more than 10% of their daily calories ​from added sugars are more likely to have abnormal cholesterol levels, including higher 'bad' LDL cholesterol, higher triglycerides, and lower heart-protective HDL cholesterol. They are also at an increased risk of developing type 2 diabetes," says the AAP.

What's more, research from Hong Kong's Centre for Food Safety found a serving of "Taiwanese style milk tea" has an average of 130 mg of caffeine per serving—not much less than the 200 mg of caffeine typically found in a serving of coffee. According to the Cleveland Clinic, no amount of caffeine is proven safe for kids 12 and under. Teens shouldn't consume more than 100 mg of caffeine daily; that's about the equivalent of one cup of coffee or two cans of soda. Too much caffeine can cause anxiety, headaches, moodiness, upset stomach, sleep disruption, abnormal heart rhythm, high blood pressure, tremors, and other negative health effects.

Nutritional facts aside, bubble tea has been linked to many different health concerns. For example, one viral news story reported that a 14-year-old Chinese teenager, suffering from stomach pain and constipation, was found to have more than 100 undigested tapioca "pearls" in her digestive system. (She likely drank large amounts of bubble tea; moderate consumption won't cause this problem).

Also, you may have seen online rumblings that bubble tea has been linked to cancer—through a Healthline report noted it's unlikely tapioca pearls contain carcinogens or the substances that can cause cancer. According to the report, the cancer rumors initially originated from a German study, but the study was never published or peer-reviewed. Therefore, no scientific evidence links bubble tea to cancer.

Another cause for concern: choking. The chewy tapioca balls (which are usually 10-15 mm in diameter) could be difficult for young kids to swallow properly. Germany's Federal Institute for Risk Management has warned the pearls could be aspirated, or accidentally inhaled into the lungs, especially by children under 4 years old. Sucking up the pearls through a straw increases this risk because of the added pressure generated when sucking.

The short answer is yes. Bubble tea is safe for consumption if enjoyed in moderation, so an occasional cup is fine for kids and teens.

To make it even healthier, parents can make bubble tea at home (and control what goes in it) with decaffeinated tea, homemade or store-bought tapioca pearls, their choice of milk, and their choice of sweetener. Parents who buy the drink at a bubble tea shop can also request it to be less sweet and pick the smallest size (which is usually still pretty big!).

If you're concerned about the pearls, ask to go "light" on them or just skip them entirely. This eliminates the risk of choking for younger kids.

11 Must-Eat Nutrients for Your Child
Was this page helpful?
Thanks for your feedback!
Tell us why!
Related Articles 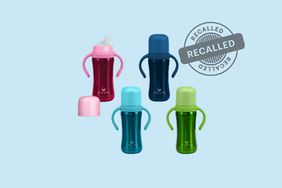