Some expectant parents are taking dozens of pregnancy tests after doctors already confirmed their pregnancies. Is all this testing reassuring or causing stress?

Six months after giving birth to her son, Kelsey Escozaria still can't let go of the 30 positive pregnancy tests she keeps stashed in the closet—a small percentage of the 200+ at-home urine tests, and 500+ ovulation tests, she took before and during her pregnancy.

"It's strange," says the Florida-based 27-year-old. "Even now, 5 months postpartum, I still take ovulation tests every day. It's like I need to take one—it feels weird not to get up and pee on a stick."

She's one of a growing number of expectant moms who shell out for dozens of pregnancy tests, both to confirm a pregnancy, and then track it. Earlier this year, British website ChannelMum reported that the majority of expectant moms it surveyed continue taking tests after a doctor confirmed their pregnancies. And on YouTube, where Escozaria shared news of her pregnancy and reviewed various tests for her 10k followers, the practice has taken on a life of its own. Moms post status updates and compare tests, and commenters often follow suit at home, spending, as Escozaria did, thousands of dollars and hours a day obsessing over the plastic sticks.

Like many compulsive testers, Escozaria's road to motherhood was difficult: She tried for 4 years, suffered 2 miscarriages, and went through a variety of fertility treatments. So by the time she conceived her son in 2017, she had gotten into a pattern. Every morning, she'd check her ovulation status, along with her basal temperature. And every day, sometimes every time she went to the bathroom, she'd pee on a stick and look for a pregnancy sign. "I'd wake up, and take a test," she says. Once she knew she was pregnant—within a week of the big event, she says—she continued to test and monitor the darkness of the lines on each test. "It was a rush to know [my baby] was growing."

She continued to track her progress through her 10-week ultrasound, when she first heard her baby's heartbeat—a physical confirmation that all was well. But even that wasn't enough to stop her from testing. "It was habit," she says. "But I weaned myself off—I would take one a day, and then one every few days."

The hyper-focus, she says, was a result of all the trauma of infertility. "I think if I had not lost those two babies, it wouldn't have been such a big deal," she says. "After that heartbreak twice in a row, if I started feeling worried, or wasn't having symptoms, I'd take a test."

After her miscarriages, the tests gave her a sense of control over her body. "I was doing ovulation tests twice a day, basal body temperature tests, cervical mucus tests—I knew my body at every minute of the day," she says. "I got so familiar that I could tell if I was ovulating from little twinges." Once she was pregnant with her son, she says, she knew within 4 or 5 days.

While Escozaria's story had a happy ending, doctors caution that binging on tests can be emotionally taxing for those hoping to get pregnant.

"Month after month of not seeing the double line, or seeing it say 'not pregnant'—I think that becomes emotionally very hard to handle," says Sheeva Talebian, M.D., a founding partner of New York City's CCRM Fertility Clinic along with partner Jaime Knopman, M.D. She estimates that over 60 percent of their patients take multiple pregnancy tests, ranging from a handful to dozens.

"We have patients who've been trying to get pregnant for a year, so they ovulate and then they'll start taking tests a week later," she says. But she cautions that early, constant testing can be misleading—while the tests are more precise than ever, they leave room for false positives immediately after ovulation, when an egg has been fertilized but hasn't yet implanted. The tests work by detecting the HCG hormone in urine, which can be present during fertilization, then disappear if the embryo doesn't stick. "The dangerous thing is that women are testing early, and they're seeing these really faint lines for a day or two, and then it goes away and they get their periods," says Dr. Talebian. "Then they're devastated."

The opposite can happen, too. "I had one [IVF] patient who was taking pregnancy tests every day after her embryo transfer, and it was negative, negative, negative," says Dr. Talebian. "She was devastated—she wanted to cancel her blood tests. When she came in she was crying, saying, 'why are you doing this to me?' And her blood test was positive!"

The doctors say they have dozens of patients like Escozaria, who continue to test throughout their pregnancies, for a variety of reasons. Sometimes, after a long stretch of infertility, it's celebratory: "They'll send us pictures [after a blood test] and say, I cannot believe it finally says pregnant!" says Dr. Talebian. She's not so keen on patients who try to monitor their progress through at-home tests. "Patients will take pictures every single day and make collages, and send them to us and say, do you think it's getting darker?" says Knopman.

But experts say the darkness of a line only reflects the concentration of HCG in the urine, which can fluctuate in ways that have nothing to do with the health of a pregnancy. Lines can be strong one day and faint the next—and even fluctuate based on the amount of water a patient has been drinking.

"I tell patients that a pregnancy test is yes or no," says Paula C. Brady, M.D., a reproductive endocrinologist at Columbia University Fertility Center. "You can't interpret how dark the line is, or how quickly it develops. Pregnancy tests are helpful in telling you that there is HCG in the urine above a certain level, and the level is quite low to get a positive pregnancy test… Even a pregnancy that's not going great will have a level that leads to a positive test. It gives you a binary yes or no."

Line tracking is common in online fertility communities, says Brittany Schmidt, who started taking multiple tests during her third pregnancy, after discovering the online forum BabyCenter, where members would post collages they'd made of their dozen or so pregnancy tests to show the progression of lines from dark to light. After two miscarriages and an anxiety diagnosis, she said, monitoring her own progressing sticks made her feel less stressed. "A lot of people find it very strange," she says, "but for people with anxiety disorders, or fertility issues, even though you know it's not a guarantee, it makes you feel safer." The 30-year-old Orlando, Florida-based mom of four (with another on the way) estimates that she's peed on over 100 sticks, for a total of over $500. "It eases the anxiety for me," she says.

In some cases, Dr. Talebian and Dr. Knopman will intervene if a patient is going too test-happy. "I'll say, you need to stop, because you'll drive yourself crazy," says Dr. Knopman.

Instead, doctors suggest opening up to an expert about your concerns and coming in for tried-and-true testing methods. "Wanting reassurance of a progressing pregnancy is totally normal, and we can help with that," says Dr. Brady. "A reproductive specialist can test your HCG levels every few days, and that can be helpful. We can provide more information with serial blood tests than a urine test."

Still, Escozaria says she wouldn't change a thing about her experience. "Infertility is unkind, and sometimes the only thing you can do to make yourself feel better is to know what's going on in your body," she says. "I really think if more people knew this, and knew their bodies, they'd feel more in control in this process." 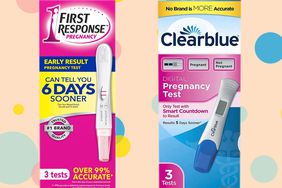 8 Best Pregnancy Tests of 2022 and How to Use Them