What does implantation bleeding look like? Medical experts explain how to tell if your spotting is an early sign of pregnancy or your monthly menstrual cycle.

When a fertilized egg implants in the uterus, which usually happens 10 to 14 days after conception, it sometimes causes part of the uterine lining to shed. When this occurs, it results in implantation bleeding, which can be one of the earliest signs of pregnancy. But here's the frustrating part: The blood that's released is nearly indistinguishable from normal spotting or breakthrough bleeding that can occur mid-cycle—especially in people who are on birth control pills or have polycystic ovary syndrome (PCOS).

Unfortunately, knowing what spotting looks like doesn't usually help you distinguish it from implantation bleeding. So, how do you know if what you're seeing is spotting or a super early sign of pregnancy?

The only surefire way to tell the difference is to take a pregnancy test. "People are so anxious about knowing whether or not they're pregnant, they want to have definitive signs to look for, but unfortunately, only time will tell," says Anuja Vyas, M.D., FACOG, with Houston Methodist Obstetrics and Gynecology Associates.

That said, certain symptoms can offer hints that you could be experiencing implantation bleeding rather than period-related spotting. Here, experts share what you need to know.

Spotting usually means just a few, well, spots of blood on your underwear or toilet tissue. Some experts claim spotting that starts brown or wine-colored and becomes a brighter red is most likely the start of your period. But George Patounakis, M.D., Ph.D., FACOG, a fertility specialist in Florida, says Googling pictures won't help if you're wondering if your bleeding is due to implantation. "There's no way to tell the difference between intermenstrual bleeding and implantation bleeding just by looking," he says.

To determine whether you have implantation bleeding or your period, you should pay attention to the following three symptoms and characteristics instead.

Dr. Vyas says that cramping associated with implantation, while sometimes intense, doesn't typically last as long as it would during a menstrual cycle. But Dr. Patounakis cautions that each person experiences uterine contractions differently. "A little blood inside your uterus can cause severe cramps in some women and no cramps in other women," he says. Therefore, paying attention to what feels out of the ordinary for your body is important.

How to Tell the Difference Between Implantation Cramps and PMS Cramps

"Some people experience implantation bleeding as heavy as the first day of their menstrual cycle, but it typically only lasts a couple of days," says Jay M. Berman, M.D., FACOG, chief of gynecological services at Detroit Medical Center's Harper Hutzel Hospital and professor of obstetrics and gynecology at Wayne State University. "When it ends, the person may feel like their period is about to start or might have breast tenderness or some nausea and may even start to feel pregnant."

Implantation bleeding can be off-and-on for a couple of days. More consistent blood flow—starting light and getting heavier as the days progress—is likely a menstrual cycle.

Should I Take a Pregnancy Test If I'm Spotting?

Anyone who's been sexually active in the previous month and could possibly be pregnant should take a pregnancy test after irregular bleeding of any kind, says Dr. Vyas.

Keep in mind that implantation bleeding will happen before a missed period. If you experience bleeding that isn't implantation- or period-related (after a positive pregnancy test, for example), it could be what's known as first trimester bleeding.

According to the American College of Obstetricians and Gynecologists (ACOG), this common phenomenon occurs in 15% to 25% of people early in their pregnancy. "But it might also be the first sign of a pregnancy loss or even an ectopic pregnancy," a potentially fatal condition where the embryo implants outside of the uterus, says Dr. Berman.

Your Chances of Getting Pregnant During Every Phase of Your Cycle

Those who experience abnormal first-trimester bleeding should see a health care provider. "There are pregnancies that bleed early on that do just fine," says Dr. Patounakis, "but your health care provider needs to evaluate to make sure you're safe." 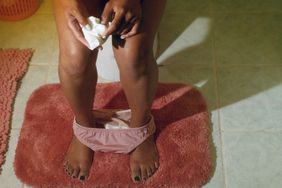 14 Very Early Signs of Pregnancy
Symptom Check: Is It PMS or Early Pregnancy?

Everything You Need to Know About Implantation Cramps
Postpartum Period: When Will Your Period Return After Birth?