This subtle bleeding can be a sign you're pregnant, but not everyone experiences it. Learn what implantation bleeding is, when it happens, and how long it lasts.

When you're trying to get pregnant, your senses are on high alert for any indication that you're officially a parent-to-be. One of the earliest pregnancy symptoms can be implantation bleeding, which happens when the fertilized egg implants into the lining of the uterus. About one-third of pregnant people will experience implantation bleeding, according to the American Pregnancy Association, and it often resembles a light period. Here's everything you need to know.

When Does Implantation Bleeding Occur?

Only about one-third of people experience implantation bleeding in early pregnancy. If it happens to you, it will occur 10 to 14 days after fertilization, says Lauren Barlog, M.D., assistant professor in the Department of Obstetrics, Gynecology and Women's Health at Rutgers NJ Medical School. "It typically occurs around the time of your next expected period."

In fact, because of the timing, some people might confuse implantation bleeding for a light menstrual period. They don't realize what it is until a pregnancy test comes up positive, says Zev Williams, M.D., Ph.D., chief of the Division of Reproductive Endocrinology and Infertility at Columbia University Medical Center.

Implantation bleeding will probably look different than your normal monthly period. The color usually ranges from light pink to dark brown (period blood is typically red), and it doesn't contain any clots. Also, implantation bleeding is usually lighter than a menstrual period. Some people don't even notice it at all—or they see a small amount of blood when they wipe. In some cases, implantation cramping can occur along with the bleeding.

How Long Does Implantation Bleeding Last?

Typically, implantation bleeding appears for a day or two (though some people only bleed for a couple of hours). Rather than consistent blood flow, it might be off-and-on.

How Soon After Implantation Bleeding Will You Get a Positive Pregnancy Test?

If you think you're experiencing implantation bleeding, what's the best course of action? Take a pregnancy test, says Dr. Barlog. Every test has a different threshold for sensitivity, but the absolute earliest you should take one is about four or five days before your expected period, says Dr. Williams. Otherwise there might not be enough pregnancy hormone (hCG) to give a positive result. If the pregnancy test is negative, repeat it in a few days.

When to Take a Pregnancy Test

When Should I Visit the Doctor?

Implantation bleeding isn't cause for concern, but if you're experiencing unusual spotting, it's important to recognize when symptoms might require a visit to the doctor. "If you are spotting but also have pain that's concentrated on one side, rectal pain, or a history of infertility or tubal disease, you should see a doctor immediately," says James Segars, Jr., M.D., director of Reproductive Science and Women's Health Research, and a professor of gynecology and obstetrics at Johns Hopkins Medicine. "These are signs that you could have a tubal or ectopic pregnancy, when the fertilized egg implants somewhere other than the uterus, usually within the fallopian tubes."

And you also should see your doctor if you've had bleeding or spotting between periods for several months, because you may be dealing with other conditions such as fibroids or polyps. 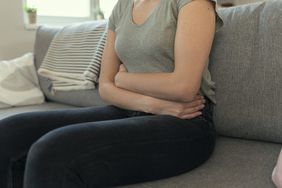