Looking for a pregnancy movie to uplift you, enlighten you, inspire you, or just make you laugh? These fun family flicks (and documentaries) will carry you through 40 weeks—and beyond.

The plot: After learning about an unplanned pregnancy, Juno MacGuff (Elliot Page) must make a hard decision: what to do about baby. Being 16, Juno decides the best route is adoption and film follows her on a journey to find her child's perfect parents.

What you'll love: While Juno tells a difficult story is does so masterfully, i.e. it is the perfect dramedy. The script—and dialogue—are well-written, the characters are well-rounded, and the cast is phenomenal. A work of cinematic art.

What you'll love: This rom-com isn't just chock-full of A-list stars like Cameron Diaz and Jennifer Lopez, it also has plenty of drama. Among the plot twists? A regimented author who's overtaken by pregnancy hormones; a father and son who turn their wives' pregnancies into a competition; professional rivals who must overcome their differences before the baby arrives; and a famous couple who's desperately trying to balance fame and parenthood.

The plot: After his parents drop a major bombshell—they're moving to Belgium a month before the baby is due!—Burt (John Krasinki) and his pregnant girlfriend Verona (Maya Rudolph) embark on an unforgettable cross-country road trip to find the perfect place to raise their child. Along the way, they discover that home really is where the heart is.

What you'll love: You'll get to see all sorts of parents in action, from brainy LN's (Maggie Gyllenhaal) zany attempt at a "continuum home" to the acid-tongued Lilly (Allison Janney) reprimanding her kids to the beautiful but heartbroken Munch (Melanie Lynskey), who's mourning her fifth miscarriage.

The plot: Kate (Tina Fey), a career woman with baby fever and a T-shaped uterus, hires Angie (Amy Poehler), a dead-broke surrogate with a relaxed set of morals, to carry her child. The carefully constructed plan is blown to smithereens when it's revealed the Angie is indeed pregnant—but not with Kate's baby.

What you'll love: Watching Kate try to mold Angie into the model mom-to-be is hysterical (and totally relatable!), but it's Angie's impressive chutzpah that delivers the most laughs. Exhibit A: The picture of a squirrel that she confidently passes off as an ultrasound.

The plot: Jenna (Kerri Russell) is a small-town waitress in a bad marriage who wants nothing more than to make her delicious pies with quirky names. When she finds out she's pregnant with her deadbeat husband's (Jeremy Sisto) baby, she plots an escape that promptly goes awry when she falls for her hunky ob-gyn.

What you'll love: If the hysterical names of her creations don't get you laughing—Bad Baby Pie, anyone?—Jenna's WTF reaction to impending parenthood will. Yet even as she's dragged into motherhood kicking and screaming, the sweet-and-sour mom-to-be still gives hope to those of us who are still a little freaked out about becoming a parent.

The plot: A one-night stand between Alison (Katherine Heigl), an up-and-coming entertainment journalist, and Ben (Seth Rogen), a stoner slacker, results in—you guessed it—an unplanned pregnancy. Deciding to keep the baby is easy for Alison; figuring out whether Ben is ready to be a dad is much tougher.

What you'll love: From morning sickness projectile vomiting to stressing out that your partner hasn't read all the baby books yet to clinging to your birth plan, no part of pregnancy is left untouched.

The plot: Based on the realities of (and problems within) the American healthcare system, The Business of Being Born is a documentary which attempts to better understand childbirth in the U.S. Includes interviews with parents and medical experts.

Why you'll love it: If you're looking for an eye-opening and intimate look at childbirth in America, this documentary is for you. The filmmakers explore—with great detail—most aspects of pregnancy, from carrying a child to labor and delivery, and they do so in an up close and personal way.

The plot: Advertising exec J. C. Wiatt (Diane Keaton) inherits a baby after a distant cousin dies—right as she's about to land a major account. After trying to juggle the demands of her high-powered job and raising a child in NYC, she decides to decamp to the country for a life that's anything but simple.

Why you'll love it: Motherhood doesn't come naturally at first to J.C.—and it shows. (Like when she hands the baby off to the restaurant host before heading into a lunch meeting.) Still, watching this self-declared "Tiger Lady" transform into a bottle-juggling SAHM is absolutely hilarious. Also, you'll die over the 80's power suits.

The plot: When high school senior and aspiring journalist Darcy (Molly Ringwald) accidentally gets pregnant by her steady boyfriend, Stan (Randall Batinkoff), the two decide that abortion and adoption aren't alternatives. So they rough it out on their own to pay the bills and raise the baby themselves.

Why you'll love it: This take on pregnancy, postpartum depression, and the early days with a newborn is refreshingly unvarnished (but highly entertaining!). As a heavily pregnant Darcy puts it, "I'm itching everywhere, my ankles are fat, there's something hanging out of my butt, the article's not going good, and now I need a haircut."

The plot: Life is perfect for urbanites Samuel (Hugh Grant) and Rebecca (Julianne Moore) until they find out they're going to have a baby. While Moore is saintly as the patient, enthusiastic mother-to-be, Grant struggles openly, awkwardly, and hilariously with impending fatherhood.

Why you'll love it: As a child therapist with an aversion to children, Samuel isn't a likely candidate as dad of the year. Still, with some help from new friends, and veteran parents, Marty and Gail Dwyer (Tom Arnold and Joan Cusack) and Dr. Kosevich (Robin Williams), Rebecca's bumbling OB, he's finally ushered into this new phase of life. 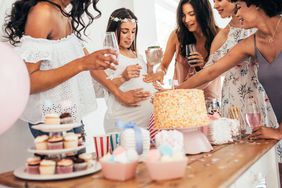 14 Things to Do Before Baby Arrives 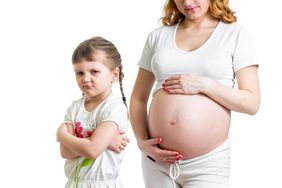