Here's how many pounds you'll pack on—and why you stop stressing (too much) over your pregnancy weight gain.

By Kimberly A. Daly

Even though the whole world can see that you're hugely pregnant, hearing a friend or neighbor exclaim, "Oh, my god, you're as big as a house!" doesn't exactly make a mama-to-be feel good.

Sure, you were expecting to put on a few or, cough, more pounds when you saw the plus sign on that plastic stick. But you may not have been ready for the reality of the pregnant body that's staring back at you in the mirror—the one with swollen breasts, thicker thighs, and a butt that deserves its own zip code—or for others to point out your changing shape.

"It's normal to be surprised by your pregnancy weight gain—it can feel like a lot in a short amount of time," says Maggie Baumann, M.F.T., C.E.D.S., a psychotherapist based in Newport Beach, California. But putting on those pregnancy pounds can be a positive experience.

Pregnancy Weight Gain by the Numbers

Just how much will you pack on during those 40 weeks?

"It depends mostly on your pre-pregnancy body mass index (BMI)," says Patricia Lo, M.D. an ob-gyn at MemorialCare Saddleback Medical Center in Laguna Hills, California. "For women with a normal BMI (18.5 to 24.9), we recommend about 25 to 35 pounds of pregnancy weight gain," she says.

Underweight women have a little more leeway and can gain between 28 and 40 pounds. Overweight women (with a BMI between 25 and 29.5) should gain about 15 to 25 pounds, and women who are obese (those with a BMI of 30 or above) should gain only 11 to 20 pounds, Lo says. If you're pregnant with multiples, your pregnancy weight gain, of course, will be higher.

Luckily, you have some time to prepare for those soon-to-come pregnancy pounds. During the first trimester, you shouldn't gain any more than a little over 4 pounds total. Some women even lose weight during those first months thanks to morning sickness and food aversions. The second and third trimesters are when you'll really see (and feel) your weight creeping up. Your pre-pregnancy BMI determines how much you should gain during this time too.

Where Does All That Weight Go?

So do those 25 to 35 pounds doctors recommend seem pretty steep for that little 7-pound bundle of joy? It turns out that your little guy will account for only about 26 percent of your total weight gain.

You might feel as though you're packing on pure fat, but most of the new weight can be attributed to fluids and expanding body tissue. With a full-term pregnancy weight gain of about 30 pounds, you get 4 pounds of increased fluid, 4 pounds of added blood volume, 2 pounds of breast tissue, 2 pounds of uterus tissue, 1.5 pounds of placenta (an organ that didn't exist before!), 2 pounds of amniotic fluid, 7 pounds of fat, protein, and other nutrient stores, and 7.5 pounds of joy (that's your baby!).

Why Your Baby Needs Those Extra Pounds

Your growing babe needs those pounds to support his development so that he can grow big and strong.

"Women who don't gain enough weight during pregnancy have a higher risk of having a preterm or low-birthweight baby," says Kathleen M. Rasmussen, Sc.D., R.D., professor of nutritional sciences at Cornell University and chair of the committee on Weight Gain During Pregnancy: Reexamining the Guidelines at the Institute of Medicine. "Babies who are small for their gestational age — meaning they're full-term but low-weight — can have all sorts of problems at birth and later in life, including respiratory, cardiovascular, and digestive issues."

Stressing Can Make You Gain More

As if those pregnancy hormone-induced cravings for chocolate-covered potato chips aren't hard enough to ignore, there's another pesky brain chemical that courses through your body during stressful situations: cortisol. Released when you're feeling anxious (about weight gain, deadlines at work, being stuck in traffic, whatever), cortisol cranks up your appetite, causing you to eat more and causing extra calories to be stored as fat around your middle.

So the next time the number on the scale creates a twinge of internal panic, take a few deep breaths. Long, slow, steady breathing — the kind that fills your lungs and belly, and pushes out your diaphragm — helps reset your brain, sending stressful thoughts on their way and making more room for good ones, like the fact that all of those extra pounds are for that special new person growing inside of you.

How Much You'll Lose When You Give Birth

The minute you push that baby out you'll lose about 11 pounds—that's taking into account the kiddo, all of that amniotic fluid, and the placenta.

A couple of weeks later, the baby-making hormones level off, allowing your body to release the fluid weight it was retaining and tackle the fat stores.

"Provided you didn't gain too much during your pregnancy, eating right and moderate exercise will help you lose the remaining baby weight relatively quickly," Rasmussen says. You'll be zipping up your pre-pregnancy jeans in no time. 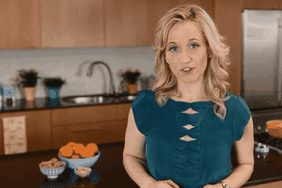 How to Chart Your Pregnancy Weight Gain 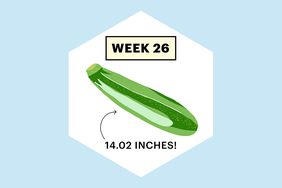 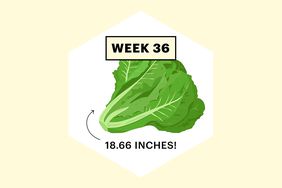 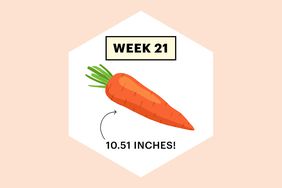 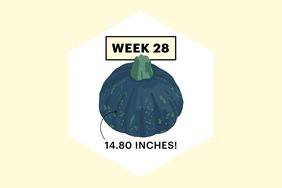 How Big Is My Baby This Week? Here's a Baby Fruit Size Chart 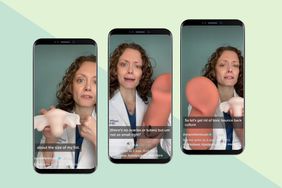