Suffering from depression while carrying a baby? Find out if antidepressants like Prozac, Zoloft, Lexapro, and Wellbutrin are safe for pregnancy.

Here's a dirty little secret about pregnancy: It's not always the magical experience that it's made out to be. In fact, around 14%-23% of pregnant people experience depression during pregnancy, according to the American College of Obstetricians and Gynecologists (ACOG). The people in the study were recognized as women, but multiple gender identities have the ability to be both pregnant and experience depression. For some of them, that means a difficult choice: choosing to take antidepressants or avoiding medications "for the baby's sake."

"You always have to weigh the risk of medication against the risk of illness," says Pec Indman, Ed.D, MFT, co-author of Beyond The Blues: Understanding and Treating Prenatal and Postpartum Depression & Anxiety. An expectant person's depression can have a very real, negative effect on them and the baby. Read on to learn if antidepressants—such as Prozac, Zoloft, Lexapro, and Wellbutrin—are safe for pregnancy.

Why Some Pregnant People Take Antidepressants

If you've already been taking an antidepressant before becoming pregnant, you may think you'll need to go off your medication, but that's not necessarily true. "It's important to talk to your doctor before stopping or switching any medication," stresses Lucy Puryear, M.D., psychiatrist and medical director with The Women's Place Center for Reproductive Psychiatry at Texas Children's Pavilion for Women in Houston and associate professor of obstetrics and gynecology at Baylor College of Medicine in Houston.

If your depression develops during pregnancy, your course of treatment will depend on your level of depression, says Shelly Cohen, M.D., J.D., a consulting psychiatrist at the Seleni Institute, a nonprofit organization that offers psychotherapy and emotional and practical support to women and moms in New York City. In general, medications are considered when depression enters the moderate-to-severe range, includes suicidal thoughts, or when a person has a history of severe depression.

Are Antidepressants Safe During Pregnancy?

The question of taking antidepressants during pregnancy is a highly debated topic. No doctor can say with 100-percent confidence that the drugs are completely safe. Nor is there any particular "safest antidepressant in pregnancy" to recommend, although Wellbutrin and selective serotonin reuptake inhibitors (SSRIs) such as Zoloft, Prozac, Lexapro, and Celexa are the most commonly prescribed options, Dr. Puryear says.

There's a wealth of research focusing on SSRIs and serotonin-norepinephrine reuptake inhibitors (SNRIs), but due to ethical regulations, most of the data looks at pregnant people who have already taken the medication. That means that the data is limited, because other factors—for example, if the pregnant person smoked or used alcohol—may have come into play. It's therefore impossible to say if the drugs are 100-percent safe.

Potential Risks of Pregnancy and Antidepressants

One common fear is that antidepressants may increase the chance of birth defects in babies. But aside from Paxil (which Dr. Cohen says is controversial for risks of cardiac complications) SSRIs have not, on the whole, been linked to an increase in birth defects above the baseline risk.

Two studies have raised other concerns about the use of antidepressants during pregnancy: A paper published in the March 2014 issue of the journal PLOS One linked preterm birth (defined as earlier than 37 weeks) and antidepressant use. The study found a 96 percent higher risk of preterm birth for people who had taken antidepressants during their final trimester. But doctors aren't quick to point the finger at medication just yet. "This study reinforces what we have known is a potential risk of using antidepressants during pregnancy, which is late preterm birth," states Christina Treece, M.D., a psychiatrist with The Women's Place Center for Reproductive Psychiatry at Texas Children's Pavilion for Women and Assistant Professor with the Menninger Department of Psychiatry at Baylor College of Medicine in Houston. She notes that the study is "not conclusive" and adds that untreated depression is also a risk for preterm birth.

How to Cope with High-Functioning Depression as a Parent

Another study, published in Pediatrics, showed that prenatal exposure to SSRIs, especially during the first trimester, may "increase susceptibility" to certain forms of autism spectrum disorders in boys. But Dr. Cohen stresses that this shows an association between an increased risk for autism and SSRI use in pregnancy, and not a cause-and-effect relationship.

A study published in the journal JAMA Internal Medicine followed 145,000 people in the United States and the children they birthed for up to 14 years. The study concluded that antidepressant use during pregnancy was not linked to behavioral disorders, developmental speech, language, learning and coordination disorders, intellectual disabilities, autism, or attention-deficit hyperactivity disorder (ADHD).

Other potential side effects of antidepressants during pregnancy include a serious but very rare condition called persistent pulmonary hypertension of the newborn, and a disorder called neonatal adaptation syndrome, which antidepressant-exposed newborns have a 10-to-30 percent chance of developing. (The condition clears up on its own, but can result in fussiness, poor feedings, respiratory difficulty, and, in rare cases, seizures.)

Pregnant people and their doctors must carefully consider the risks of treating depression with medication versus the risk of the mother's illness, Dr. Treece says. Changes to medication ideally should happen before conception so you have time to adjust. Ultimately, only you and your physician can determine what's best for you.

Going Off Antidepressants While Pregnant

Some people may want to discontinue antidepressants while pregnant because of the small risk of complications. Here are some questions to ponder before you do (and remember, you should never stop medication without consulting your physician first).

Most antidepressants are prescribed based on a doctor's comfort level and what works for the patient. While antidepressants may slightly raise the risk of complications during pregnancy, it's important to realize that not treating depression can have serious consequences. For example, someone with untreated depression may be more likely to not take good care of themself physically, and may take more over-the-counter medications, Dr. Cohen says. They may also be more likely to abuse drugs and alcohol and to smoke.

Adds Dr. Puryear: "Given the stigma toward mental illness, women are often more reluctant to take psychiatric medication while they are pregnant. Somehow they have the idea that they 'should' be able to manage without it in order to protect their baby, but no one has this expectation for any other serious medical illness; women take medication for many different illnesses, including hypertension, asthma, rheumatoid arthritis, and others. Depression is no different."

Can You Take Antidepressants While on Birth Control? 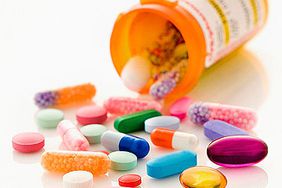