Some experts believe semen and sperm may be able to help prevent preeclampsia and even decrease morning sickness. (Yes, really.)

There are many advantages to having pregnancy sex, including lowered blood pressure, improved sleep, and increased intimacy. But did you know that if you engage in penis-in-vagina intercourse, exposure to sperm can provide additional benefits? It's true. While many of these claims need more research, introducing seminal fluid into your birth canal might not be such a bad idea.

Here are three touted benefits of semen during pregnancy.

A high-risk pregnancy condition, preeclampsia is defined by elevated blood pressure and protein in the urine. It occurs in 5% to 8% of all pregnancies, according to the Preeclampsia Foundation, and it can cause pregnancy complications like a low birth weight baby, placental abruption, preterm delivery, kidney failure, and maternal and/or fetal death.

Researchers in Denmark released a 2017 study linking semen and preeclampsia prevention. In summary, pregnant people who had been exposed to the biological father's seminal fluid for at least six months before conception had a lower risk of developing preeclampsia. Those with six months or less of exposure had a higher instance of the condition. One possible reason: Semen contains proteins and microbes unique to the paternal line, and pre-pregnancy exposure improves the maternal immune response to the same materials when seen during pregnancy. More exposure to the paternal cells in this protein can help create "immunity" against preeclampsia, so to speak.

Along those same lines, a 2014 study published in the Journal of Reproductive Immunology also found that seminal fluid in the vagina was linked to a lowered risk of preeclampsia. In fact, those with the highest amount of vaginal-semen exposure had a 70% reduced risk. The risk was not lowered by any oral introduction of semen, however.

According to one SUNY-Albany psychologist, Gordon Gallup, increased semen exposure could help morning sickness. Gallup's theory states that a pregnant person's body rejects paternal cells in the fetus as a foreign substance, according to Slate. The body tries to expel this unfamiliar genetic material through nausea and vomiting.

If this theory holds, the cure for morning sickness may be exposing yourself to semen through either vaginal or oral sex. This would help your body develop a "tolerance" to paternal DNA, thus decreasing nausea and vomiting during pregnancy. The exposure should ideally happen before conception and throughout the first few weeks of pregnancy. Of course, no medical study has actually backed up Gallup's theory, so take this "advice" with a grain of salt.

But semen might play a role, too. Seminal fluid contains a hormone-like substance called prostaglandins, which is capable of ripening the cervix, says Dr. Belotte. In fact, a synthetic form of prostaglandin is also used in labor induction medications like misoprostol. 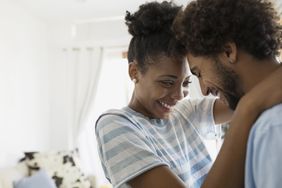