Protect yourself and your baby by getting the right vaccines before, during, and after pregnancy.

The vaccines you get before and during pregnancy play an important role in protecting your health, and they safeguard your baby's health as well. A mother's immunity is Baby's first line of defense against certain serious illnesses.

"Pregnant women make lots of antibodies, and they transfer these antibodies to the infant during the last months of pregnancy," says Dr. Sharon Nachman, M.D., the division chief of pediatric infectious diseases at Stony Brook Children's Hospital. "Vaccinations boost these antibodies in mothers and babies."

Vaccines come in three forms: live virus, dead virus, and toxoids (harmless, chemically altered proteins drawn from bacteria). Pregnant women shouldn't get live virus vaccines—like the combined measles, mumps, and rubella vaccine (MMR)—because there's a slight chance these will harm the unborn baby. Vaccines made from dead viruses, such as the flu shot, and toxoid vaccines, such as the tetanus/diphtheria/pertussis (Tdap) shot, are safe.

Here's a rundown of what you need to know about vaccinations during pregnancy and in the months before conception.

What Vaccines Should You Get Before Pregnancy?

Certain preventable infections can be harmful during pregnancy. That's why you should ask for a blood test during a pre-pregnancy checkup to find out if you're immune to these diseases. If you're not, you should get vaccinated before becoming pregnant. Just be sure to postpone pregnancy for one month because these shots are made from live viruses that can harm your baby.

Measles, a very contagious illness caused by a virus, has experienced a few recent outbursts in this country. It starts with a fever, cough, and runny nose and is followed by a spotted red rash a couple of days later. Mumps is also a contagious viral disease that causes the salivary glands to swell. If you are infected with either one in pregnancy, the risk of miscarriage may rise (measles may also increase the chance of premature labor).

The rubella virus, also called German measles, presents flu-like symptoms often followed by a rash. It can also be harmful during pregnancy: Up to 85 percent of babies of moms who contract it during the first trimester develop serious birth defects, such as hearing loss and intellectual disabilities.

Learn more about the MMR vaccine.

An extremely contagious disease, chickenpox causes fever and an uncomfortable, itchy rash. About 2 percent of babies of women who develop chickenpox during the first five months of pregnancy have birth defects, including malformed and paralyzed limbs. What's more, a woman who develops chickenpox around the time of delivery can also pass a life-threatening form of the infection to her baby.

Learn more about the varicella vaccine.

Vaccination During Pregnancy: Which Shots Are Safe?

Vaccines made from dead viruses are usually safe during pregnancy. Your healthcare provider can help decide which ones you should receive. "The worst thing is for a baby to get one of these devastating diseases because a mom wasn't properly vaccinates," says Dr. Nachman.

The Centers for Disease Control and Prevention (CDC) recommends a flu shot for all women who will be pregnant during the flu season, which is November through March. The flu shot is made of dead viruses, so it's safe for both you and baby. But you should avoid FluMist, a nasal-spray vaccine made from live viruses.

Getting The Flu Shot While Pregnant: Everything You Need To Know

The best time to get a flu shot is in October or November, before the flu season is in full swing. And because flu strains change every year, the vaccine does too—so don't rely on last year's shot to get you through this year's season.

Moms-to-be who come down with the flu, especially during the second half of pregnancy, are more likely than other women to suffer severe symptoms or complications such as pneumonia. Even a moderate case of the flu can make you feel miserable, resulting in fever, headaches, muscle pain, sore throat, and coughing. Most of these symptoms last about four days, although coughing and fatigue can drag on for two weeks or longer.

Learn more about the flu shot.

Because of the increase in pertussis (whooping cough) in the U.S., the recommendation regarding the Tdap vaccine was updated in June 2013. If a tetanus/diphtheria booster (Td) is needed (it has been more than 10 years since the last one), women should receive Tdap, which includes pertussis. Tdap can be given at any point during pregnancy, though the preferred timeframe is between 27 and 36 weeks of gestation. The vaccine is made with toxoids, so it's safe to get while expecting.

Tetanus, also called lockjaw, is a disease of the central nervous system that causes painful muscle spasms and convulsions. The bacterium that causes tetanus can be found in soil and in animal waste. It can enter the bloodstream through a cut in the skin, so follow up with your doctor if you get a deep or dirty wound. If contracted during pregnancy, tetanus can cause fetal death.

Diphtheria is a respiratory infection that can cause breathing problems, paralysis, coma, and even death. It's now rare in this country, but you need a booster shot every 10 years; otherwise your immunity is likely to wane. Pertussis, an extremely contagious bacterial disease, can be fatal in infants and is characterized by a deep, hacking cough and a high-pitched "whoop" sound.

Learn more about the DTaP and Tdap vaccines.

It's safe to get this shot when you're pregnant, and if you're a healthcare worker or you live with someone who has the disease, consider vaccination. Hepatitis B is a viral infection that causes liver inflammation, nausea, fatigue, and jaundice (yellowing of the skin and eyes). In some cases, it can cause chronic liver disease, liver cancer, and death.

8 Common Reasons Parents Don't Vaccinate (And Why They Should)

A pregnant woman with hepatitis B can pass the infection to her baby during delivery, and without prompt treatment, the baby has a high risk of contracting serious liver diseases as an adult. The CDC recommends that all pregnant women be screened for hepatitis B because it's possible to have it without knowing.

Learn more about the hepatitis B vaccine.

This vaccine protects against a liver disease that spreads through contaminated food or water. Symptoms include fever, fatigue, and nausea. It isn't usually as serious as the B version of the disease, and the illness won't affect an unborn baby most of the time. In rare cases, hepatitis A may contribute to premature labor and infection in the newborn.

The safety of this vaccine has yet to be determined, but because it's produced from dead viruses, the risks are likely low. If you're traveling to a developing country or if you work with the virus in a laboratory setting, you should discuss vaccination with your doctor.

Learn more about the hepatitis A vaccine.

If you have a specific chronic condition, such as diabetes or kidney disease, your doctor may recommend the pneumococcal vaccine, which protects against some forms of pneumonia. Although potential harm to an unborn baby is unknown, researchers believe that the risk is low.

Learn more about the pneumococcal vaccine.

What Vaccines Should You Get After Delivery?

Now is the time to catch up on any vaccines you may have been unable to get during pregnancy or before becoming pregnant, such as the MMR and chickenpox vaccines. Moms who are breastfeeding can get vaccinated according to a normal adult vaccination schedule.

'I'm a Doctor and a Parent': Here's How Vaccines Work

As mentioned above, if you're due for a Td booster and didn't get one during pregnancy, the latest recommendation is to get Tdap, which includes pertussis, also known as whooping cough. Women younger than 26 should also consider getting the HPV (human papillomavirus) vaccine that helps protect against cervical cancer. The shot isn't recommended during pregnancy because studies haven't yet determined its safety for a developing baby.

What If You're Allergic to a Vaccine?

Serious reactions to vaccines are rare. However, your doctor may tell you to skip certain shots if you have an allergy to a substance they contain. Those who are allergic, for example, to baker's yeast (used in making bread) shouldn't get the hepatitis B vaccine; those with a severe egg allergy should avoid the flu shot; and people with a severe allergy to gelatin or to the antibiotic neomycin shouldn't get the measles, mumps, and rubella or varicella vaccine. If you're skipping any shots, you should discuss alternate ways to prevent illness with your doctor. 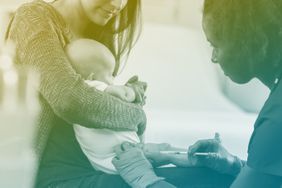