Some women develop itchy, painful varicose veins in the rectum after birth. Here's what you need to know about managing postpartum hemorrhoids.

Hemorrhoids are enlarged veins of the anus and rectum. Many women get hemorrhoids for the first time during pregnancy, but they’re also common after delivery because of the intense pressure of pushing. Constipation (another common postpartum complaint) also exaggerates hemorrhoids after birth.

You're at increased risk of postpartum hemorrhoids if you had them during your pregnancy, but they can happen to anyone, says Constance Bohon, M.D., an OB-GYN in Washington, D.C. Hemorrhoids can be internal or external—but either way, they usually aren’t dangerous for the new mom.

What’s Up With Pregnancy Hemorrhoids?

Here’s what you need to know about symptoms and treatment for postpartum hemorrhoids.

How will you know you have hemorrhoids after labor ? Most women report discomfort around their rectum. Occasionally, the hemorrhoid is visible—it looks like a pink pea is sticking out of your bottom. Other side effects are itching, burning, and pain, says Jeanne Faulkner, R.N. They may also bleed, especially after a bowel movement.

How to Treat Postpartum Hemorrhoids

Doctors may prescribe stool softeners and topical medications with hydrocortisone to alleviate swelling. Other treatment methods for hemorrhoids after birth include:

The majority of postpartum hemorrhoids resolve on their own within a few days or weeks. Call your doctor if they aren’t improving after several days of home treatment. Also let him/her know if the pain or itching becomes intense, or if the vein looks purple or large, which may indicate a clot. 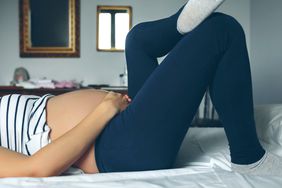 What's Up With Pregnancy Hemorrhoids?

Vagina After Birth: What to Expect and How to Soothe the Pain 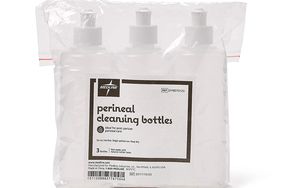