Making healthy pregnancy meals can be challenging. But these nourishing, dietitian-approved pregnancy recipes are delicious and easy to prepare.

Why Should You Use a Pregnancy Meal Plan?

According to the American Academy of Obstetricians and Gynecology (ACOG), you need an extra 340 calories a day in the second trimester, and slightly more in the third. If you are carrying twins, you'll need an extra 600 calories. Triplets? You'll need 900 more.

Since everyone's body and activity levels differ, the U.S. Department of Agriculture (USDA) recommends using the MyPlate Plan to personalize your caloric needs. Always talk to a health care provider to determine the right calories and nutrients for you.

Having a pregnancy meal plan can help you get through the week. On average, the meals in this plans provide around 2,200 calories a day. Read on for single-serving recipes for breakfast, lunch, dinner, two snacks (one calcium-rich), and a treat.

Remembering to prepare these oats before bed may not be easy, but you'll love waking up to a pre-made breakfast.

Pour 1 cup of nonfat milk over 2/3 cup of rolled oats and stir in 1/4 teaspoon of cinnamon. Cover with plastic wrap and let sit in the fridge overnight. In the morning, add 2 tablespoons of chopped walnuts and a small chopped apple.

Craving some Mexican food? This pregnancy recipe will satisfy your early-morning hunger!

Scramble one egg and one egg white in 2 teaspoons olive oil. Add 1 cup baby spinach and sauté until just wilted. Put the egg-spinach mixture on a 10-inch whole wheat tortilla, along with 1/4 cup reduced-fat shredded Mexican blend cheese and 1/4 cup salsa. Roll up and enjoy!

An English muffin turns this traditional lunchtime sandwich into a fun breakfast option. Separate the two sides of a whole wheat English muffin. Place 1/2 of a large pear, sliced, on one half and top with a 1-ounce slice of cheddar cheese.

Put both halves under the broiler for 2–3 minutes, until the top browns and the cheese is melted. Sandwich the two halves together. Serve with the remaining half of the pear spread with 2 teaspoons of almond butter.

With this baked dish, you get two breakfast faves—bacon and eggs—in one portable package. Preheat the oven to 350 F. In a medium bowl, whisk together eight eggs with 1/4 teaspoon salt and freshly ground pepper to taste; set aside. Cook and stir 1/4 pound chopped lower-sodium bacon in a 10-inch non-stick, oven-safe skillet over medium until crisp.

Pour the eggs over the remaining bacon in skillet. Sprinkle evenly with 1 tablespoon finely chopped chives. Transfer the skillet to the oven and bake for 10–12 minutes or until set.

This recipe makes eight servings. Serve warm, cold, or at room temperature. Refrigerate for up to three days. Enjoy this pregnancy recipe with a medium (16 ounce) nonfat decaf latte and an orange.

Breakfast is the most important meal of the day—even in a pregnancy meal plan—so don't miss these three high-energy ways to kick off your morning!

This pita has veggies, eggs, hummus, and tons of flavor! Fill a 6-inch whole wheat pita with 1/4 cup hummus, one sliced hard-boiled egg plus one hard-boiled egg white, 1/3 cup chopped tomato, 1/2 cup baby spinach, a sprinkle of paprika, and 1 tablespoon toasted pine nuts. Serve with a cup of grapes.

While some seafood is off-limits during pregnancy, you can indulge in your cravings with this safe and tasty crab salad sandwich.

Skip the fast food restaurant and make this burger at home to save time, money, and calories. Cook a veggie burger according to instructions. Using a grill pan sprayed with cooking spray, grill a thick slice of yellow onion and a Portobello mushroom cap.

Place veggie burger onto half of a whole wheat hamburger bun spread with 2 teaspoons of prepared pesto. Top with a slice of Swiss cheese, Portobello mushroom, onion, and the second half of the bun. Serve with two carrots, cut into sticks, and dipped into 2 tablespoons of hummus.

Choosing a healthy pregnancy lunch when you're out can be daunting, but Panera Bread's "You Pick 2" menu makes it easy to eat right. Order half a Napa Almond Chicken sandwich, half a Strawberry Poppyseed & Chicken salad, and eat half an apple side.

Stuffed acorn squash has tons of nutrients that you need during pregnancy, but it's especially great for vegetarians.

Cut one medium acorn squash in half horizontally; remove seeds. Place on a baking sheet sprayed with cooking spray, cut side down. Bake at 375 F for 45 minutes or until tender.

Add 1 cup cooked wild or brown rice and 1 tablespoon chopped pistachios to the mixture and continue to stir until heated through, about 1 minute more. Set aside.

Remove squash from the oven, stuff each half with the rice and bean mixture, then top each half with 2 tablespoons of Parmesan cheese. Place in the oven again and cook for an additional 10 minutes.

When you're pregnant, doctors recommend at least 60 grams of protein each day, which shouldn't be a problem with a meal like this—it's packed with more than 50 grams!

To make this pregnancy recipe, preheat the oven to 475 F. Bread 5 ounces of chicken tenders by dipping in an egg wash made with two egg whites lightly beaten with a fork, then in 2 tablespoons bread crumbs (preferably whole wheat) mixed with 1 tablespoon parmesan cheese, 1/2 teaspoon oregano, 1/4 teaspoon dry mustard, and 1/4 teaspoon garlic powder.

Bake chicken tenders on a wire rack or baking sheet sprayed with cooking spray for 15 minutes or until chicken is cooked to 165 F internally. Serve with 4.5 ounces baked Alexia sweet potato fries (about 18 fries) and 1 cup steamed broccoli drizzled with 1 teaspoon olive oil and a squeeze of lemon juice.

Throw some of these kebobs on the grill for a healthier alternative to standard BBQ fare.

First, cut 4 ounces of pork tenderloin or boneless top loin roast into 1.5-inch pieces. In a plastic baggie, add the juice of half a lime, a half clove of chopped garlic, 1/4 cup juice from pineapple canned in its juices, and 1 teaspoon olive oil. Let marinate for about 30 minutes.

Next, cut half of the medium red bell pepper and one-fourth of a medium onion into 1-inch pieces. Thread pork, pepper, onion, and 1/2 cup canned pineapple chunks onto two skewers. Grill on a medium-high flame until pork is cooked to an internal temperature of 145 F.

You've probably heard that you need more iron during pregnancy, but did you know that pizza can be a great place to find it?

Reduced-fat cheese and nonfat yogurt turn a these nachoes into a calcium-rich dinner for pregnancy.

Layer 1-ounce corn chips with 1/3 cup kidney beans, 2 tablespoons chopped olives, and 1/4 cup shredded reduced-fat cheese. Bake in oven or toaster oven for about 10 minutes or until all ingredients are hot and cheese is melted.

Dinner time is sometimes the biggest culprit for pregnancy heartburn, especially if you eat closer to bedtime. However, making dinner your lighter meal could help. Here are four more healthy dinner ideas for pregnancy, all about 500 calories.

Soft cheeses may be off the menu while pregnant, but pasteurized and harder cheeses are a great way to get the extra calcium you need.

If you weren't a yogurt fan before pregnancy, now is an ideal time to convert. A nonfat yogurt will provide lots of protein and calcium but not a lot of sugar—a perfect combination for a pregnancy meal plan.

Store-made smoothies can be loaded with sugar and are often lacking in nutrients.

You can keep nutritional bars in your bag or the car for a perfect on-the-go pregnancy snack. There are many bars on the market, but Luna Bars are made specifically for women with natural ingredients.

The next time you want to munch on something salty in front of the TV, pick popcorn instead of potato chips. You'll satisfy your craving for some salt without the unhealthy fats found in greasy chips.

Toss 1/2 bag of 94% fat-free microwave popcorn with 2 tablespoons of parmesan cheese and black pepper to taste. It's the perfect addition to a pregnancy meal plan!

Snack cravings kick into overdrive when you're expecting. Here's how to snack mindfully during pregnancy.

If you're not a big meat eater, finding other ways to get your protein is important, and peanut butter is full of it.

Evenly distribute 1 tablespoon peanut butter on top of seven Kashi snack crackers, then top each with another cracker to make seven sandwiches.

Many dips and dressings are loaded with unhealthy fats and not many nutrients. For a pregnancy meal plan, dip veggies or pretzels in homemade hummus instead.

Getting ready for a baby takes a lot of time and energy, which means you might not always have the time—or desire—to cook. So instead, try Amy's Light and Lean Pasta & Veggies dish for a microwavable but healthy snack.

The next time you need a break, have a snack that forces you to sit down and just relax. For example, try 1 cup ready-to-eat minestrone soup with 1/2 whole wheat English muffin topped with 1/2 teaspoon whipped butter.

Take a break from prepping the nursery and reward your hard work with a square of dark chocolate (about 1 ounce).

Because this treat is packed with natural antioxidants, you can satisfy your sweet tooth and meet nutritional needs all at once.

Every pregnancy meal plan should include a creamy frozen treat. We like Yasso's Sea Salt Caramel Frozen Greek Yogurt Pops.

Save the microwave popcorn for movie night and grab a 1 ounce bag of Smartfood popcorn when you're in a rush.

Bonus: This white cheddar-flavored popcorn is tasty, so you won't even need salt or butter.

This five-ingredient dessert tastes decadent and is made with protein-rich Greek yogurt. The night before you want to serve it, place 1 1/2 cups nonfat vanilla-flavored Greek yogurt in a strainer over a bowl in the refrigerator to drain.

Puree 10 ounces of frozen strawberries in a blender until smooth. Fold the strawberries into the yogurt. Taste for sweetness, adding more honey if you'd like. Divide between four glasses or bowls. Keep extras in the fridge for two or three days.

Are you craving a chocolate chip cookie? To keep cookies fresh and portions small, instead of whipping up a whole batch, break out the refrigerated dough and bake one or two cookies at a time. 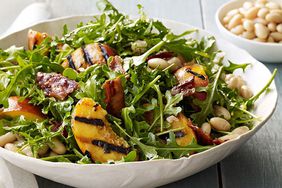 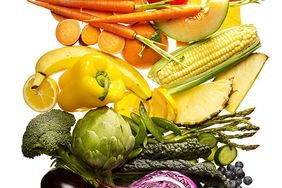 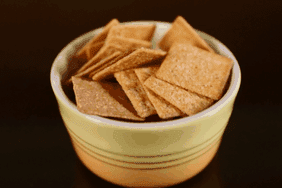