Making the best choices for you and your baby about food safety can feel overwhelming and scary. These simple guidelines can help you feel more confident that what you are eating is safe and healthy.

Wondering if you really need to put your sushi and seafood days on hold? Here's the latest dish on fish: According to the Mayo Clinic, pregnant women should not consume raw or undercooked seafood or shellfish, including lox. The risk of eating raw or undercooked fish and shellfish, such as sushi, sashimi, clams, oysters, mussels, and scallops, includes exposing your baby to harmful bacteria or parasites, according to the Food and Drug Administration (FDA). Pregnant women should also avoid high-mercury fish, which tend to be bigger, such as swordfish, king mackerel, tilefish, and shark.

The good news is not all seafood is off-limits as long as it's bought and prepared properly. The FDA recommendation for pregnant women is 12 ounces of cooked seafood per week, which includes varieties of smaller ocean or farm-raised fish, shellfish, or canned fish. Look for fresh seafood that is stored in the refrigerator or on ice (40 degrees F) and be sure it's cooked to an internal temperature of 145 degrees F. If you don't have a food thermometer, you can tell if the fish is done with a few simple tricks:

The Mayo Clinic gives the thumbs-up on the following seafood, which are healthy choices for protein and omega-3 fats: catfish, cod, pollock, salmon, shrimp, and canned light tuna (limit albacore tuna and tuna steak to a maximum of 6 ounces or 170 grams per week).

If you have additional questions about your seafood intake, talk to your doctor or health care provider about what's right for you.

For some, licking the batter bowl is the real treat of baking. But for moms-to-be, foods containing raw eggs could put you and your baby at risk of harmful bacteria, such as salmonella, according to the Mayo Clinic. It's also recommended that you stay away from homemade sauces known for their raw or partially cooked egg content, such as mayonnaise, hollandaise sauce, bearnaise sauce, aioli sauce, homemade ice cream, some salad dressings, eggnog, and mousse and meringue desserts. Foods that use pasteurized eggs or are fully cooked, such as store-bought sauces or dressings and freshly baked cupcakes or cookies, are safe to eat. Just remember that moderation is key!

Most store-bought milk is pasteurized, which means it has been heated during production to kill bacteria. If you buy local milk from the farmers' market, make sure it is pasteurized, and always store milk in the refrigerator at 40 degrees F.

Previous food safety recommendations completely ruled out soft cheeses that could contain Listeria, a bacteria that can be dangerous for both Mom and Baby. Today, as long as cheese is made with pasteurized milk, soft cheeses are considered safe for pregnant women. Look for a clearly marked pasteurization label -- if you don't see a label on the following cheeses, the Mayo Clinic recommends pregnant women avoid: feta, blue cheese, goat cheese, Brie, Camembert, or Mexican-style cheese, such as queso blanco, queso fresco, and panela.

Avoid unpasteurized juice, such as locally produced apple cider because of the risk of E. coli, according to the US Department of Health and Human Services. The FDA advises women not to drink juice sold by the glass or in juice bars (including smoothies), which are not required to label whether the juice has been treated for potentially harmful bacteria. Commercially produced juices, found in major supermarkets, have undergone the pasteurization process and are safe to drink. However, it is always a good idea to read labels before you buy or consume products. And if you love a smoothie every morning, go for it -- as long as it's made with pasteurized juice.

You don't have to change much when it comes to eating beef, chicken, turkey, or pork -- except maybe investing in an instant-read food thermometer if you don't already have one. Always make sure your hands and cooking surfaces are clean and that meat is cooked to a safe minimum internal temperature. The FDA recommends the following guidelines:

It might seem strange warming your deli meats before making a sandwich, but while you're pregnant it is best to cook both hot dogs and deli meats until they are "steaming hot," according to the Mayo Clinic. Not doing so could put you at risk for the bacterial illness listeriosis. So next time you want to stop for a sandwich over lunch or are craving a hoagie out of the blue, ask for it toasted to be on the safe side.

Sodium nitrates and sodium nitrites, which are found in hot dogs, deli meats, and other cured meats such as bacon and sausage, are another area of concern. Sutter Health, a nonprofit network of community-based health care providers in Northern California, recommends minimizing the consumption of such additives in foods, cautioning that nitrates may be carcinogenic, increasing the risk of cancer. Another solution? Look for sodium nitrate- and nitrite-free products that are cured with naturally occurring vegetable nitrates, such as celery juice.

Cooking with marinades is a wonderful way to flavor and tenderize meat; however, it's important to discard marinades after using them on raw meat products. Never reuse or taste marinades after contact with raw food. The Mayo Clinic recommends that pregnant women avoid refrigerated pates and meat spreads, unless canned, and to stay away from prestuffed uncooked meat products that can pass on bacteria to the stuffing.

What could ever be wrong with fruits and vegetables? The good news -- not much, as long as you properly wash and care for fresh produce. Rinsing and scrubbing the outside of produce to remove surface dirt is the best way to get rid of hiding bacteria and parasites, such as toxoplasma, as well as cutting out bruised sections where bacteria can grow. The FDA does not recommend washing fruits and vegetables with soap or detergents. So keep eating your fruits and veggies, which contain the vitamins and nutrients you and your baby need most. Talk to your doctor about setting up nutritional goals and guidelines that are right for you.

The U.S. Department of Health and Human Services recommends avoiding raw sprouts, including alfalfa, clover, radish, and mung bean. Bacteria, such as E. coli or salmonella can infiltrate the seed of the sprouts, making it impossible to wash off. If you cannot live without your sprouts, make sure they are thoroughly cooked.

Alcohol has long been considered a no-no while pregnant. Although there are anecdotes of doctors giving an expecting mother the OK for an occasional glass of wine, the resounding opinion by the medical community, including the Centers for Disease Control and Prevention (CDC), United States Department of Agriculture (USDA), Mayo Clinic, Cleveland Clinic, and FDA, is that pregnant women should not drink alcohol of any kind.

According to the March of Dimes, a pregnant woman can have up to 200 milligrams (mg) of caffeine per day, which equals about one 12-ounce cup of coffee. (It's important to note that not all coffee contains the same amount of caffeine and can vary from different types and brands of coffee.) Although there were conflicting studies in 2008 about whether more than 200 mg a day can increase the risk of miscarriage, the March of Dimes suggests limiting your caffeine intake to no more than 200 mg a day to be on the safe side. This includes monitoring your overall caffeine consumption that can come from coffee, tea, chocolate, soda, coffee-flavored products, and some medications. If you're a coffee drinker, this can feel like a big hurdle to overcome, especially if you're used to a couple of java runs a day. It's important to talk to your doctor about what amount of caffeine is right for you and to discuss healthy alternatives. The March of Dimes also recommends consulting with your health care provider before taking any medications, including over-the-counter products.

In our global market and economy, it is always good to be aware of food recalls and food safety precautions. To find out the latest on recalls, visit fda.gov/safety/recalls. If you have any questions about what is safe, always talk to your doctor or healthcare provider. 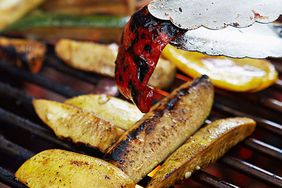 The Pregnant Woman's Guide to Barbecues

How can I avoid food poisoning? 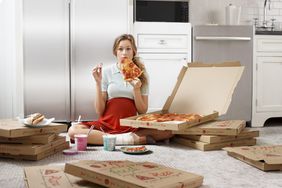