Redditors wonder how safe it is to take a hot bath when you're pregnant, so we looked into the science and talked with an OB-GYN to find out.

Whoever said that pregnancy makes you glow forgot to mention how achy and itchy it can be too. That's why at some point, every pregnant person will ask themselves, can I take a hot bath? This is exactly what Reddit user @verthinks_ did, and the responses are both hilarious and supportive but are they accurate? We asked an expert to weigh in on the hot bath while pregnant debate. Here is everything you need to know.

The Reddit thread started when @overthinks_ asked the Pregnant group, "I love baths, and I've avoided them since I've found out I'm pregnant. But everything hurts, and all I want is a nice hot bath. I heard I can have a warm one? But like damn, do I have to make sure it's a specific temp?"

@Majestic_ad_5205 replied, "My OB said not to worry about home baths, just don't go to saunas or spend a long time in a hot tub."

@skat987 immediately chimed in to add, "My OB said the same thing! She said hot showers and baths are fine. The general rule of thumb she gave me was that if I'm uncomfortable or overheated, the baby will be, but they are fine. You could check with your OB to be safe if you're worried, though."

Using a Bathtub for a Water Birth

@AinoTiania helpfully pointed out that "Finns go to saunas when pregnant. I was only told by my dr to avoid saunas and hot baths when I was put on pelvic rest."

@Wooden-Eye9333 hilariously added, "I'm literally commenting while in a bath at 39+3. I have had multiple baths every week."

And @InfectedAlloy88 jumped in to say, "Currently at the hospital in labor, and I've had two hot baths since I got here."

So How Safe Is a Hot Bath While Pregnant?

So, how safe is a hot bath when someone is expecting? It turns out the advice in the Reddit thread wasn't too far off from what doctors agree is safe, but it also wasn't accurate either.

"In general, caution should be used. Staying in a hot tub or bath for more than 10 minutes could raise your body temperature higher than 101 degrees Fahrenheit," Anar Yukhayev, M.D., OB-GYN at Long Island Jewish Medical Center, Katz Women's Hospital, tells Parents. "There is insufficient evidence on this topic, but from the literature that is published, it appears that raising your body temperature higher than 101-102.2 F can cause an increased risk for birth defects and miscarriages."

22 Tips for a Health Pregnancy

Very few studies can point to hard evidence that hot baths are either good or bad. Part of the reason for this is that there are serious ethical obligations to consider when including pregnant people in any study. The health and well-being of both parent and baby are necessary, and that may sometimes prevent studies from being able to find conclusive answers to questions. For example, it would be ethically wrong to try and crank up a hot bath to see where the bright line exists for how well a fetus can cope with temperature changes. Therefore, the existing data is limited, and doctors will always tend to be cautious—with good reason.

But that doesn't mean that science has stopped wondering about how safe a hot bath is for someone who is pregnant. In 2018, the British Journal of Sports Medicine published a study that pregnant people can safely work out in outdoor temperatures of 77 degrees Fahrenheit. They can also enjoy a hot bath of 104 degrees Fahrenheit or a sauna set to 158 degrees Fahrenheit for up to 20 minutes without worry.

It is critical to note, however, that this study wasn't a controlled experiment intended to prove or disprove the safety of hot baths and saunas during pregnancy.

"Presumably, people have been told to avoid exercise in hot weather and sauna and hot bath exposures because of concerns about reaching this critical threshold," senior study author Ollie Jay of the University of Sydney in Australia said in an email to Reuters. "It is very difficult to get that hot—most people do not realize that."

But, as interesting as that study may be, it is clear that more research needs to be done before the American College of Obstetricians and Gynecologists will change its guidelines on the safety of taking hot baths while pregnant. Currently, the ACOG says that the risk for birth defects from high temperatures remains a concern.

Dr. Yukhayev agrees. "I would generally recommend staying away from hot tubs to avoid the increased risk for birth defects and miscarriage. Aside from the risk due to the elevation of your body temperature, soaking in a bath can change your vaginal pH and predispose you to vaginal irritation, vaginal infections, and urinary tract infections."

Does Risk Depend on the Stage of Pregnancy?

Does the risk of birth defects or miscarriage from taking a hot bath change depending on what week of pregnancy or trimester the parent is in? That depends on who you ask.

The Reddit thread is chock-full of anecdotal stories of parents taking baths and experiencing no harm to themselves or their babies. And even advice on trusted sites like Healthline agrees that a brief bath in water under 105 degrees F is likely safe, but Dr. Yukhayev echoes the advice given by the ACOG, which states that baths really should be avoided because the risk is simply too big.

"Earlier in the pregnancy, it can cause miscarriages and birth defects, and later on in the pregnancy, soaking in the tub can cause an infection," Dr. Yukhayev tells Parents. "The elevated temperature can cause decreased blood flow to the baby, which can in turn cause distress, so, it's not safe in any phase of the pregnancy."

The bottom line on hot baths during pregnancy is that it carries risks, and you should talk to your doctor before soaking in a tub. As for our friends over at Reddit, the science cited by the Reddit users is shoddy at best. The thread is an excellent reminder that we shouldn't get our medical advice from a social media comment section, even if it feels supportive and safe. 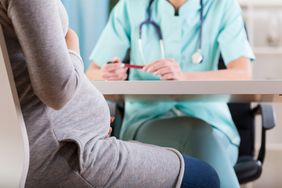