Here's your guide to having sex after a C-section, including what changes you might encounter.

Right after a C-section, having sex is probably the last thing on your mind. But as your recovery progresses, you might wonder when it's safe to get back in the saddle. We've broken down exactly when you can have sex after a C-section, with advice on whether the experience will be painful.

Pregnancy After C-Section: How Long Should You Wait to Conceive?

How Long After a C-Section Can You Have Sex?

"After delivery, it's recommended to wait six weeks before resuming vaginal intercourse," says Pamela Promecene, M.D., professor and obstetrician with McGovern Medical School at UTHealth/UT Physicians in Houston. This timeline gives your C-section incision time to heal and your cervix time to close and return to normal.

If you had complications during or after delivery, though, you may have to wait for up to eight or ten weeks for penetrative sex after a C-section. It's important to let all of the tissue heal to prevent further damage. Check with your practitioner before restarting sexual activity so they can advise you on the best course of action.

Will Sex Be Painful After a C-Section?

Once your doctor gives you the green light to have sex after C-section recovery, your first time could feel different. For instance, if you're having penetrative vaginal sex, it might be more uncomfortable than it might have been after a vaginal delivery. Why? A study published in the International Journal of Obstetrics and Gynecology in 2015 found that Cesarean delivery is associated with persistent pain during or after sex, a condition known as dyspareunia. The study's authors looked at which factors contributed to such pain, including breastfeeding, fatigue, postpartum depression, and even abuse.

More than 1,200 first-time mothers across Melbourne, Australia, participated in the research. Most of those women who had resumed having vaginal sex by 12 months postpartum said they experienced pain the first time they did so after having their babies, and close to a fourth of those women still reported pain at 18 months postpartum. But women in the group who had an emergency Cesarean section, vacuum extraction, or elective C-section had double the risk of pain during or after penetrative vaginal sex at 18 months postpartum as women who had spontaneous vaginal births with intact perineums or unsutured tears.

Another 2019 study in the British Medical Journal found that people who had C-sections also reported other sexual challenges post surgery, including problems with vaginal lubrication, low sexual desire, pain in the vagina, and difficulty reaching orgasm. It is worth noting that most studies on sexual response and changes after both vaginal and C-section births have been done on cisgender birthing people, so future studies will also investigate specific challenges to those with other gender and sexual identities and relationships.

Will a C-Section Affect My Sex Drive?

Having a C-section should not affect your sex drive any more than a vaginal delivery, even though many new parents in general don't feel like making love again right when the six weeks are up (and that's totally normal). For one thing, you're probably exhausted from your newborn's round-the-clock schedule. And if you're nursing or pumping, the hormones you release while breastfeeding have also been known to temporarily lower libido, too. But pregnancy, labor, and delivery can certainly impact your sex drive, so don't be afraid to talk to your partner and your doctor if you do experience any changes you experience long-term that you are concerned about.

Clitoral stimulation may be safer to perform before the common six-week clearance mark, since it's external stimulation only, but most doctors do recommend waiting until you've been medically cleared for sexual activity in general, just to be on the safe side. (And keep in mind that orgasms can trigger postpartum uterine cramps, which might feel uncomfortable post-birth and especially if you're breastfeeding.) 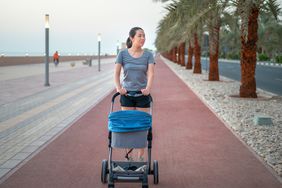 How to Ease Into a Postpartum Exercise Routine After Birth