Breast Leaking During Pregnancy: What Expectant Moms Need to Know

Are your boobs leaking clear or yellow liquid? Here's the reason behind this completely normal pregnancy experience, and whether you need to visit the doctor.

In a perfect world, you'd get to enjoy your curvaceous pregnancy breasts without problems. But for most women, a bigger chest brings a little tenderness and sometimes an annoying phenomenon known as nipple discharge, or breast leaking. Read on to learn more about this perplexing pregnancy phenomenon.

What Causes Breast Leaking While Expecting?

Leaking breasts during pregnancy is pretty normal, and it's caused by an imbalance in pregnancy hormones. "During pregnancy, your body releases prolactin, a key hormone that promotes milk production," says Patrick Duff, M.D., an OB-GYN at the University of Florida, Gainesville. With prolactin levels surging, your pregnancy breasts are raring to go–filling up with colostrum, the early form of breast milk that’s creamy white or yellow in color. Colostrum is high in protein and contains antibodies that protect your baby against infection during his first few days in the real world.

At the same time, estrogen made by the placenta is acting to prevent the secretion of milk, in order to suppress it until the baby arrives. "Sometimes the balance of prolactin and estrogen isn't perfect. It's like having your foot on the gas and the brakes at the same time—sometimes the accelerator overrides the stopping mechanism," says Dr. Duff. "And a little bit of milk can leak out."

When Does It Happen?

Many doctors claim that breasts start developing colostrum at around 14 weeks, but some women start leaking before then. "Some women may go their entire pregnancy without leaking, but seeing a few drops of liquid is normal," says Sharon Phelan, M.D., a professor of obstetrics and gynecology at the University of New Mexico Health Science Center School of Medicine.

Stimulated nipples can trigger the breast leaking, adds Dr. Phelan. This can happen in a number of ways. Breasts stimulated during foreplay might discharge a few drops, and activities where the nipples rub against your clothing (say, a brisk walk or Zumba class) could also cause the breast to leak clear fluid.

Can I Stop Breast Leaking?

There's nothing you can do to stop the leakage, so you may want to wear nursing pads inside your bra to prevent spotting on your shirt.

Do I Need to See a Doctor?

If you're leaking more than a few drops, or if you're noticing a thick discharge or spots of blood, it's a good idea to make an appointment with your OB-GYN. Many times these symptoms are nothing to worry about; they’re caused by the major changes your milk ducts are undergoing as they prepare for lactation. However, they can also indicate "mammary duct ectasia, or a clogged milk duct, which is easily treated by your doctor," says Dr. Duff 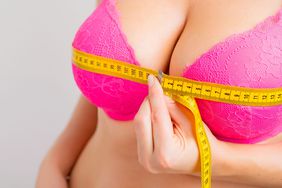 Will Your Breasts Ever Be the Same After Pregnancy?

Is it normal for my breast to leak milk months after giving birth?