Are nitrites bad for me during pregnancy?

Q: I was told to avoid nitrites now that I'm pregnant. What's so bad about them?

A: When you're pregnant, it can seem like you're deprived of so many foods and drinks you love -- and while your newly restricted diet can be a bummer, know that there's a good reason your doctor is asking you to abstain. When we digest foods that contain nitrates -- like deli meats, bacon, sausages, and some hot dogs -- our bodies form compounds called nitrosamines, which have been found to be carcinogenic (meaning they may cause cancer), and there's very little known about the affect nitrosamines could have on your baby. Recently, manufacturers have been using fewer nitrates in the processing of their foods, but it's always better to play it safe and wait until after your baby is born.

Aside from nitrates, there are other reasons to avoid meats like cold cuts now (especially from fresh deli counters). One of the biggest is the risk of listeriosis, an infection caused by eating foods contaminated with listeria bacteria. Listeriosis can not only make you very sick with flu-like symptoms and violent bouts of vomiting, but it can also cause preterm delivery and even stillbirth if you contract it while you're pregnant. Lastly, many of the foods that contain nitrates are also loaded with saturated fat and sodium, so as good as they taste, they're bad for you -- pregnant or not. To be healthy and safe, stick to well-cooked, lean cuts of your favorite meats instead. 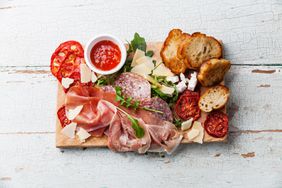