The Ramzi theory uses the placement of your placenta during early ultrasounds to predict the sex of your baby. Here's why experts say it's not an accurate method.

Parents-to-be can uncover plenty of folklore about predicting their baby's sex. Place a threaded ring over your belly and evaluate which way it swings, mix your urine with baking soda to see if it fizzes, note the shape and tilt of your pregnant belly … and the list goes on. If you're on the hunt for more ways to predict your baby's sex, you may have come across the Ramzi theory.

The Ramzi theory—sometimes called the Ramzi method—states that the location of an expectant parent's placenta, as seen in early ultrasounds, could predict the sex of their baby. The theory goes that if your baby's placenta is situated on the right side of the uterus, you will be having a boy, and if it's located on the left side, you will be having a girl. Proponents say that the Ramzi method can predict your baby's sex as early as six weeks into the pregnancy.

As is the case with many sex prediction methods out there, the Ramzi theory has about a 50 percent chance of being right, which means that it's an unreliable method that's equivalent to random guessing. Here's what expectant parents need to know. (Also, keep in mind that the biological sex of your child isn't the same thing as their gender identity.)

Where Did the Ramzi Theory Come From?

The Ramzi method is attributed to Dr. Saad Ramzi Ismail, who theorized that placental location in the six-week ultrasound could determine a baby's biological sex.That said, there's no evidence this theory comes from a reputable source, according to Beth Oller, M.D., a family physician based in Stockton, Kansas.

"The paper that started Ramzi's method does not include an author or affiliation, was published on a site owned by a media company and is not a peer-reviewed medical journal," Dr. Oller notes. Additionally, it's unknown who Dr. Ramzi is, or what his credentials are. "To anyone in the medical field, this information is enough to discredit the theory," Dr. Oller adds.

Is the Ramzi Theory Accurate?

Although the Ramzi theory is interesting, experts agree that it's not an accurate way to predict your baby's sex. Kecia Gaither, M.D., who is double board-certified in OB-GYN and maternal fetal medicine, says, "there is no known scientific basis or factual data for proof" for it.

The Ramzi theory also doesn't make sense from a medical point of view, says Dr. Gaither. "Placental implantation is not just noted on the right or left side of the uterus—it can be anterior, posterior, fundal, or in rare cases, within the abdominal cavity (known as an abdominal pregnancy—a rare type of ectopic)."

Dr. Oller notes that the Ramzi method probably has about a 50 percent chance of working. "These are the same odds for predicting your child's sex if you guessed, asked your grandma what she thought you were going to have, or flipped a coin," she describes.

Moreover, the Ramzi method has been studied and debunked by reputable medical researchers. Experts from Australia tested the Ramzi theory and published their peer-reviewed conclusions in the medical journal Obstetrics and Gynecology. They studied 277 pregnancies, noting placental location in the first trimester and, eventually, the sex of these babies. Their conclusion? "There is no relationship between placental location and fetal gender."

There are lots of reasons a parent might want to learn the sex of their baby before birth, says Katie Sagaser, MS, LCGC, director of genetic counseling at JunoDx. "Some parents want to be able to prepare their nursery, the items on their baby registry, or the clothes in their child's wardrobe based on fetal sex information," she says. Many parents feel that learning the sex helps them bond with their baby; others might wish to know their baby's sex because of medical or cultural reasons.

Proven Methods For Finding Out The Sex Of Your Baby

If learning your baby's sex before birth is important to you, there are some proven ways to get that information. The simplest and most widely used method is the mid-pregnancy ultrasound, also known as the anatomy scan. "Prenatal ultrasound has long been the most common method for expecting parents to learn their baby's sex," says Sagaser. Although it's possible for your baby's sex organs to be viewed in the first trimester, the highest likelihood of clear visualization isn't possible until 16 or 18 weeks gestation, Sagaser says.

Other methods that can determine the sex of your baby include genetic/chromosomal tests such as:

Talk to your doctor to determine if these tests are right for your pregnancy. 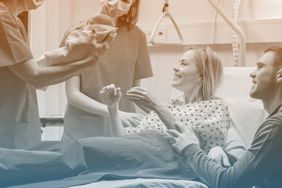 What Does the Placenta Really Tell Doctors About Your Health & Your Baby?
Pregnancy Week 1