Wendy Friedman was about 37 weeks pregnant with her second son when the coronavirus pandemic changed everything—including her hospital's policy for allowing her doula to be present during her delivery.

When Wendy Friedman, 35, found out she was pregnant with her second child, she felt prepared for her pregnancy and delivery. She hired a doula after a great experience working with one during the birth of her first son, Asher, four years earlier. "My doula I had for my first birth was so important for my birth process," she says. But as cases of COVID-19 continued to increase in her Queens, New York community, her hospital changed its policy, and doulas were no longer allowed in the delivery room.

During her pregnancy, Friedman was still able to go to her doctor's office for prenatal appointments since she was too far along for virtual appointments to confirm the baby's status. "I also had to go to the hospital once a week because I had gestational diabetes," she says. "I did feel very nervous going, but I knew they were taking a lot of safety precautions."

As Friedman approached her April 2020 due date, her doctor scheduled her to be induced. While she was nervous about an induction, her only request was that her husband, Howard, be able to be in the delivery room with her. "I just want a safe birth and I just want my husband to be there—that's the most I ask for right now." Fortunately, weeks earlier, New York's then-governor Andrew M. Cuomo signed an executive order requiring all hospitals in the state to allow birthing people to have a partner in the labor and delivery room.

On the evening of Thursday, April 2, 2020—two days before her planned induction date—Friedman started having contractions. When her brother-in-law arrived to stay with Asher, Friedman and her husband left for the hospital. "As soon as we got to the hospital lobby, the guard handed us each a mask," she says. "They checked us in and took our temperature and asked us if we had been exposed to COVID-19. Once it was confirmed our temperatures were OK, we were brought into the waiting room." Once Friedman was examined and considered far enough along to be admitted, her husband was allowed to join her in the delivery room.

"My labor went pretty fast—I did have to wear a mask, though I was pulling it down," says Friedman. Her labor lasted about an hour and 45 minutes from the time she entered the delivery room and on April 3, her son Noah was born. "Originally I was supposed to have a doula with me, and I was very upset I couldn't have her there," she says. "I think that because it was my second time going through it, my husband was a great support person."

Friedman was told that her husband would have to leave after two hours once she was moved to the postpartum room because the hospital is using the postpartum floors for COVID-19 patients. After those few hours, healthy new mothers and babies were being moved to another building for recovery. Her husband was not permitted to stay with her there. "A NICU doctor came to check out Noah before we moved to make sure it was safe for him to go," says Friedman. "Initially, when I found out about it I was worried, but it wasn't as bad as I thought. The transport team took me on the stretcher, two nurses took Noah, and I said goodbye to my husband."

The recovery room was one big room separated by curtains, and to use the shared bathroom, Friedman had to flag down a nurse to watch the baby. "It helps that this was my second and my recovery was not that bad. If I had a more difficult recovery, there was no option to put the baby in the nursery," she says. "When I was ready for discharge, it was challenging because my husband couldn't come in to help me leave. I had this day-old baby and I had to dress him and get my stuff together by myself." Howard was waiting for her outside with a car seat.

Once at home, things were a bit crazier than expected. Asher was home all day since his school was closed and no family or friends were coming to the house to help with the baby because of mandated social distancing. "It's really hard just being alone during this time," she says. "We could really use some support right now and we don't have that support."

Friedman wants parents-to-be to know that while there was and continues to be a lot of fear about going to the hospital to give birth during a pandemic, it was not as bad as she expected. "Hospitals, and nurses, and doctors, they are still doing their jobs," she says. "They are making sure that all women are safe, babies are safe, everyone is safe. In the end, you are going to have a healthy baby and your baby will be here soon. It's a time to bond with your baby." 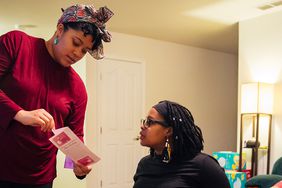 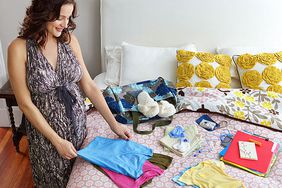 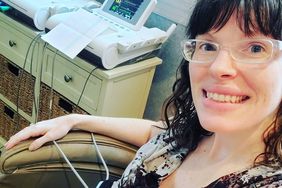