A woman and her fiance sued Tri-City Medical Center in Oceanside, California after she says doctors performed an emergency cesarean section on her without anesthesia.

Having to undergo an emergency C-section is stressful and can even be traumatic. But at least in the U.S., patients can expect their hospitals to have an anesthesiologist on staff to manage their pain during the surgery. But in a horrific lawsuit out of Oceanside, California, a woman alleges that her doctor performed an emergency C-section without any anesthesia.

Delfina Mota and her fiancé sued Tri-City Medical Center, claiming medical malpractice, medical battery, and emotional distress from the procedure. According to court documents, Mota was 41 weeks along when she arrived at the hospital on November 15, 2017, to be induced. She labored all night, and then around 5 a.m., the situation took a scary turn. The doctors couldn't pick up the fetal heartbeat, so her doctor, Dr. Sandra Lopez, called for an emergency C-section.

Mota—who had been given an epidural the previous night—was transported to the operating room, and an anesthesiologist was paged multiple times but didn't answer. At that point, the epidural had "no effect on the surgical site for the C-section, which was located on her abdomen," according to the lawsuit. Yet, before the anesthesiologist could reach the OR, Lopez ordered that Mota be strapped down, and she made an incision in the mom-to-be.

In the doctor's "Operative Report," quoted in the complaint, Dr. Lopez stated that she made the incision without anesthesia and separated Mota's abdomen muscles to reach her uterus before the anesthesiologist walked into the room.

"[Mota] was crying and screaming at the top of her lungs, that she could feel everything that was happening and was also pleading for help, and for Defendants to stop cutting her," until she passed out, according to the complaint.

The suit alleges that Mota's fiance Paul Iheanachor could hear Mota from the hallway. He recalled to the Los Angeles Times, “I heard the screams, the horrific screams. That’s when I realized they were cutting her without anesthesia.”

In retrospect, Mota told the paper, “I understand why they did it. But this is a hospital…. There should have been measures in place.”

Mota and Iheanachor shared with the L.A. Times that they're now proud parents of a 7-month-old baby girl named Calli. Nonetheless, if the series of events did play out as the lawsuit alleges, the new mom has likely had to do a great deal of emotional and physical healing.

A medical center spokesperson said, "Patient safety and quality are the utmost priorities for Tri-City Medical Center and all of our partners. Tri-City Healthcare District cannot comment further on pending litigation."

No doubt this story could send chills up expectant parents' spines. But it does bear noting that, while there are rare cases for a C-section to be performed without anesthesia (and they often need to be in third world countries), it's very rare for this to happen in the U.S., according to John Thoppil, MD, OB/GYN, of River Place OBGYN in Austin, Texas.

Most C-sections are done under regional anesthesia—a spinal block or an epidural block—which numbs only the lower part of your body. That way, you can remain awake. In some, uncommon cases, general anesthesia may be needed, but there are dangerous risks, like aspiration, Dr. Thoppil notes.

Of course, the dose of an epidural a woman is given will vary, if she's laboring vs. having a C-section, as doctors want you to be able to push and have motor function in the former scenario.

But avoiding a horrific situation like the one described in this lawsuit may very well boil down to proper communication between doctor and patient. Doctors should tell their patients that, despite anesthesia, they'll feel a bit of pressure or even discomfort with the procedure during a C-section. Patients should always share what they're feeling, Dr. Thoppil notes. And, of course, there is never an excuse for OBs failing to hear their patients.

In 2020, Mota's case was dismissed by a California court. According to public records, the court found that "Although Ms. Salazar was present through hearing the chaos in the operating room, she was not contemporaneously aware, nor appreciated, that there was insufficient anesthesia." 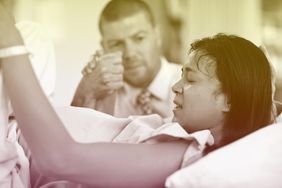 Labor Without an Epidural: 4 Reasons You Might Have to Go Without Anesthesia