Are you worried about your C-section scar? Our primer will help you care for your incision, and clue you in on what to expect as it heals.

Millions of people have cesarean sections. In fact, according to March of Dimes, nearly 32% of all live births in the United States are delivered via this method each year. This means that millions of parents have C-section scars. (And, if you are reading this, you probably do too.) The good news is post-surgery care is generally minimal, and these wounds tend to heal well. Most C-section scars heal within a matter of weeks—or months.

Here's everything you need to know about your C-section, from what to expect after your procedure to some of the most common FAQs about the most common surgical incision around.

Are There Different Types of C-Section Scars?

There are two different types of cesarean section incisions: vertical and horizontal. Most C-sections are done the latter way, with 95% of procedures in U.S. being done via a "bikini cut." However, vertical incisions are used in extreme emergencies, specifically when doctors don't have time to do the more intricate and less visible incision. If they do a vertical skin incision, they're likely to do a vertical uterine incision, too.

How Big Are Most Incisions?

C-section scars are surprisingly small. In most cases, baby's head fits through a four- to six-inch skin incision made horizontally just below the pubic hairline. The abdominal muscles are moved aside (not cut through) and a horizontal incision is also made in the uterus. That said, in rare cases, doctors make a vertical incision from below mom's belly button to the pubic bone. This results in a larger scar.

Since they're usually made below the pubic hairline, you might not see your C-section scar at all. It'll look red or pink for several months but eventually it fades to a pale, flat, thin line. Some scars may appear bigger, thicker, or more raised than others, of course; however, they're rarely very obvious.

"We generally make the incision as low as possible and into the pubic hairline so that it is not visible when wearing bikinis or low-riding clothes," says Leena Nathan, MD, an Ob-Gyn at UCLA Health in Westlake Village, California.

How Should You Take Care of Your C-Section Scar?

Before you're discharged from the hospital—typically around four days, depending on your insurance and the specifics of your delivery—your doctor will remove the staples from your incision; if you had sutures, they'll dissolve on their own. Your C-section scar will be covered with a paper tape-like product known as Steri-Strips. These will fall off on their own in about a week; don't mess with them before that. They're keeping your wound closed and clean.

While your scar is fresh—usually for the first two weeks—you'll be instructed not to lift anything heavier than your baby so as not to disturb the healing process. During this time, you can shower freely using a mild soap without scrubbing the area. It's fine to get the incision (and the Steri-Strips) wet, but you should avoid submerging your scar in a bathtub or swimming pool during the early days. At this point, your scar will likely be puffy, and the area around it will be pink.

Are There Any Side Effects?

In the first few weeks after the procedure, you may experience pain, bleeding, numbness, and cramping. You might also have C-section scar itching, but resist the urge to scratch the healing wound. If you notice heavy bleeding or oozing from your incision site, reddened edges, increasing C-section scar pain, or have a fever higher than 100.4°, call your doctor right away, as these could be signs of infection.

What Can You Do to Encourage C-Section Scar Healing?

Eat well so your body has the right nutrients for healing and creating healthy tissues. Keep it clean during the initial C-section scar healing period to prevent infection, and avoid heavy lifting, housework, or any big movements that might stretch or irritate the scar for the first six weeks.

How Long Does It Take for a C-Section Scar to Fully Heal?

After about six weeks, your C-section scar will be healed—meaning you'll likely be able to resume all regular activity without disturbing it. Giving yourself at least six weeks of healing time "allows the incision lines to mature, so that when strenuous activities are performed, the integrity is not compromised," says Dr. Gala.

And although the integrity of the scar may be intact, you may still note that it has turned a reddish-purpleish color. Don't worry, that's completely normal. The color will persist for about six months before fading to a less noticeable whitish line, says Dr. Tassone.

While uncommon, your scar may have a raised characteristic, known as a keloid. Doctors aren't sure what causes keloid C-section scars, "but there is obviously a hyper reaction to the healing process that causes the scar to grow outside its original boundaries," says Dr. Tassone. Some physicians attempt to counter the effect by injecting cesarean wounds with a steroid called Kenalog at the time of surgery, but the results are mixed—as are treatments such as lasers and injections of interferon.

Do I Need C-section Scar Creams?

You may be eager to try vitamin E or over-the-counter creams like cocoa butter, but manage your expectations. "There have not been any good scientific studies demonstrating that any over-the-counter preparations are better than just proper wound care," says Rajiv B. Gala, M.D., the American College of Obstetricians and Gynecologists' young physician at large. "Most of the expectations presented in online advertisements are best-case scenarios and may not be realistic in typical cases."

You should also be mindful to avoid certain cosmetic creams if you're nursing. "There are things that will work on scars and stretch marks, like Retin-A, but these need to be administered after pregnancy and breastfeeding," says Shawn Tassone, M.D., an Austin, Texas-based Ob-Gyn and author of the books Hands Off My Belly! and Spiritual Pregnancy.

Should I Give Myself a C-Section Scar Massage?

Massages can reduce C-section scar tissue formation and can help ensure a smooth, flat, pain-free, and supple scar, says Leslie Lo, DPT, a women's health physical therapist at Northwestern Memorial Physicians Group in Chicago. Beginning four to six weeks post-surgery (get your doctor's clearance first), massage the scar, working it with a rubbing motion—first side to side, then up and down; then diagonal. "You can also lift and roll the scar between your thumb and forefinger," Lo says. Doing this two to three times a day for five to 10 minutes at a time can keep the scar pliable, soft, and cosmetically appealing.

Pregnancy After C-Section: How Long Should You Wait to Conceive?

Appearance concerns aside, Lo says a C-section scar massage can help prevent chronic pelvic pain. "If the scar is thick and deep, it can limit the mobility of muscles and connective tissue, contributing to pain and immobility," Lo says.

Are There Any Other Ways to Reduce the Appearance of a C-Section Scar?

If the appearance of your C-section scar is upsetting you, there are possible ways to change its look—and not all require surgery. A scar revision, which takes place under local anesthetic or sedation, involves opening the scar (but not the underlying muscle) and re-closing it. Recovery time is about three to four weeks, says David Cangello, M.D., who's in private practice in New York City and an attending plastic surgeon at Lenox Hill Hospital and NewYork-Presbyterian Hospital.

For a less invasive option, you can apply a silicone sheet to the scar, starting two weeks post C-section. It may prevent long term redness or bumpiness by hydrating the scar, Dr. Cangello says, "but you need to wear it 24/7." You can also undergo C-section scar surgery.

"I'm not at all saying that OBs don't know how to close [a wound] properly," Dr. Cangello emphasizes. "But an OB's concern is delivering a healthy baby—that's their expertise. In this case, our expertise is making things look beautiful." Insurance does not cover a plastic surgeon's involvement; Dr. Cangello charges $3,000 and says that fee is on par with other surgeons'.

Keep in mind, however, that not everyone is concerned about the look of their C-section scar. Some choose to appreciate what it symbolizes, instead. Others get C-section scar tattoos, or body art which covers the incision site. The most important thing is that you do what makes you happy and learn to love the skin you're in. 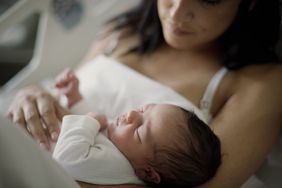 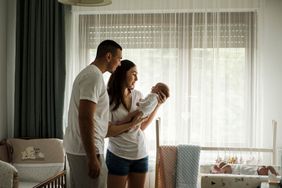 How New Parents Can Ease Wrist Pain From Holding Their Baby