Can You Check Your Miscarriage Risk With a Pregnancy Test?

Taking a pregnancy test after a miscarriage can be scary, but Clearblue's Weeks Estimator may help women detect their risk of pregnancy loss the next time around.

I've already told you about the Clearblue Advanced Pregnancy Test with Weeks Estimator—which has the ability to tell you how far along in your pregnancy you are (well, at least it tells you if you're 1-2 weeks along, 2-3, or 3+). I thought that alone was amazingly cool, but it turns out the test also has a separate possible function for those who have a history of miscarriage, or those who are worried they might have one.

Of course the people over at Clearblue didn't design this snazzy new test for this purpose—but it's pretty cool that it could be used this way. Especially because the March of Dimes estimates that as many as half of all pregnancies end in miscarriage—many occur before a woman even knows she's pregnant. The majority of miscarriages happen in the first 13 weeks of pregnancy with only 1 to 5 percent occurring between weeks 13 and 19.

One of the main warning signs of a miscarriage is that the pregnancy hormone, known as human chorionic gonadotropin (hCG)—which can be measured in a woman's urine—does not rapidly rise the way it should in early pregnancy. So for instance, if you were to take one of these pregnancy tests and you showed up as "1-2 week pregnant", and a week later you were to take it again, your reading should now say "2-3 weeks" or "3+ weeks." If it does not, it's cause for concern, and you should see your doctor immediately.

This bonus effect could put some women at ease—just another sign that their pregnancy is moving along as it should. What a relief! But please promise you won't run out and buy a cartload of these and start obsessing over whether all is well with your pregnancy! And even if you do, the good news is once you get the "3+ weeks pregnant" sign, the tests can't tell you any more info. So then you can return to relying on your doctor for updates, which is a much better plan in the long run. All those years of schooling weren't for nothing!

TELL US: Would you use a pregnancy test to find out if you were at risk for a miscarriage?

Image of woman with a pregnancy test courtesy of Shutterstock.

6 Signs You Might Be Pregnant With Twins
Pregnancy Week 2

When and Why Pregnancy Ultrasounds Are Done
Pregnancy Week 3 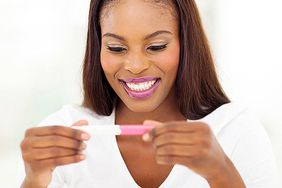 Can a Pregnancy Test Give a False Negative?

How to Take the Most Accurate Pregnancy Test at Home