Me? I just posted my ultrasound pics on Facebook. I was too overwhelmed with twins on board to want to get very crafty with my pregnancy announcement! But some folks go big. And some go very, very big—enlisting celebrities to help announce their pregnancy news to family and friends! Here's who did it and how.

The songstress became the latest star to help a real expecting mama share the big news. She turned up at KTU's morning show with Carolina Bermudez and Paul "Cubby" Bryant to reveal on the air that Bermudez and her husband are pregnant with baby number two... by adapting the lyrics to "Heartbeat Song" to fit the news. Even better? The show played an audio recording of the baby's heartbeat from a recent doctor visit to punctuate the announcement!

When a fan named Emily recognized the superstar at a coffee shop, she seized her opportunity to ask him if he'd help her break the news. He obliged, and held up a sign that said: "Emily's Pregnant!" while the mama-to-be stood by giving a thumbs-up signal.

Talk about being in the right place at the right time. One couple ran into Paul Rudd just as they were getting ready to announce their pregnancy news widely. They snapped a photo with the star holding a sign indicating "She's knocked up!" with an arrow pointing to the new mom-to-be. When you remember that Rudd was among the stars of 2007"²s Knocked Up—it's extra awesome.

Everyone else can stop doing the pregnancy announcement photo with bags of ice as a play on the 1989 hit "Ice Ice Baby"—because this couple already won. The South Florida pair reached out to the management company of the actual Vanilla Ice to participate in a photo! Hubby Jason stands on the left with a cup of ice, the rapper in the middle, and wife Emily on the right showing off her bump! 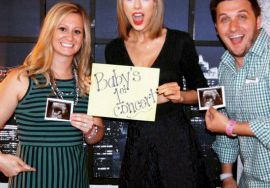 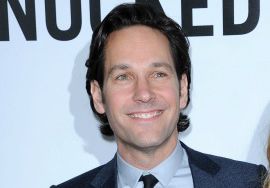 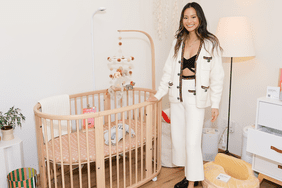