Chemical pregnancy is an early miscarriage that happens within five weeks of implantation. Here's what you need to know about causes, symptoms, and impact on future pregnancies.

Getting a positive pregnancy test is an incredibly emotional experience. But what if, one or two weeks later, a follow-up test reads negative? Chances are you've experienced a chemical pregnancy.

According to Lauren Averbuch, M.D., a doctor at OBGYN Westside in New York City and a clinical instructor at Mount Sinai Hospital, a chemical pregnancy (also known as biochemical pregnancy) is a very early miscarriage. It happens before evidence of an intrauterine or extrauterine pregnancy shows up on ultrasound. “The earliest ultrasound findings are seen at five or six weeks, where we can see a gestational sac. Biochemical pregnancies happen prior to that,” Dr. Averbuch explains.

Although having an early miscarriage can spur feelings of grief and sadness, it won’t impact your fertility or future pregnancies. Read on for more about the causes, symptoms, and risk factors of chemical pregnancies.

Doctors don’t know what causes chemical pregnancy, but it’s thought to stem from chromosomal abnormalities that lead to improper development of the embryo. Dr. Ashley Storms, M.D., an OBGYN at Spectrum Health in Grand Rapids, Michigan, says other possible chemical pregnancy causes include infection (like chlamydia or syphilis), implantation outside of the uterus, clotting disorders, and anatomic problems. “Another theory involves problems with the endometrial lining, which prevents proper implantation and growth of the embryo,” adds Dr. Averbuch.

Any women can experience chemical pregnancy, but a handful of risk factors may increase your chances. These include maternal age (women over 35 have a greater chance of any type of miscarriage, says Dr. Averbuch), thyroid and blood clotting disorders, and other medical issues.

While undergoing IVF treatment doesn’t increase your risk of chemical pregnancy, it allows more possibility for diagnosis. “Women who undergo IVF have frequent blood tests and monitoring for HCG (a hormone produced after implantation). Therefore a positive HCG will be detected in IVF patients, whereas other women may miss the relatively short-lived positive hormone level,” says Dr. Averbuch.

Can You Prevent Chemical Pregnancy?

Wondering how to prevent chemical pregnancy? Dr. Michael Silverstein, M.D., an OBGYN at Maternal Fetal Medicine Associates in New York City and clinical faculty member at Mount Sinai School of Medicine, says prevention is impossible. “Once you had a positive pregnancy test, only your pregnancy knows whether it will be healthy or result in miscarriage,” he says. In other words, the pregnancy will play out however it’s intended, depending on the circumstances surrounding fertilization.

Chemical pregnancies usually happen within five weeks of implantation. More specifically, they occur one or two weeks after ovulation, around the time your period is expected to come, says Dr. Storm. But although 30-50% of women experience a chemical pregnancy, most don’t know they had one.

“Usually the pregnancy hormone never rises enough to give women nausea, fatigue, breast tenderness, and other pregnancy symptoms,” says Dr. Silverstein. The only telltale sign is a late period, although that could have various other causes as well (like stress, starting or stopping birth control pills, and dietary changes). Blood tests can confirm whether you’ve actually had a chemical pregnancy.

Some women claim they experience bleeding or cramping as chemical pregnancy signs, but Dr. Averbuch points out that these are also common side effects of a menstrual period. “It's very hard to know retrospectively, but if you had a positive pregnancy test followed by delayed menstrual-like bleeding, you may have had a chemical pregnancy,” she says. “These symptoms can also mean many different things, so it is very important to be evaluated by a doctor. They may want to rule out ectopic pregnancy (a pregnancy outside of the uterus) which can present similarly but can be life threatening.”

Getting Pregnant After Chemical Pregnancy

Some women struggling with infertility may find solace in their chemical pregnancy. According to Dr. Averbuch, “Having a chemical pregnancy can be reassuring for the possibility of future conception, and many people find this to be a silver lining. While it's sad to have lost an early pregnancy, you are likely to conceive again without issue.” She encourages women who have recurrent and consecutive early pregnancy losses to talk to their doctor. He or she might find an underlying issue (such as an undiagnosed infection or uterus problem) that requires treatment. 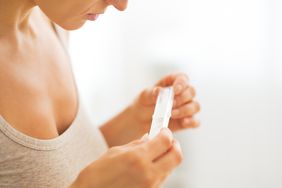 How to Tell the Difference Between Implantation Cramps and PMS Cramps