Vanishing Twin Syndrome is more common than you might think. It occurs in as many as 30 percent of twin pregnancies. If you've mourned the loss of a multiple, just know you're not alone.

As the mother of three sets of twins, I consider myself something of an expert in multiples. But that hasn't always been the case. I don't have a family history of twins, so my first twin pregnancy came as a shock.

While I did my best to adjust to the news that I would be welcoming not one but two babies, my OB-GYN was less optimistic. After my first ultrasound, she told me not to expect both babies to make it. One was measuring behind, and she informed me that it would likely end in Vanishing Twin Syndrome.

I hadn't planned to have twins—who does?—but once I was pregnant with two babies I wanted both of them. Thankfully, both of my twins survived that pregnancy. But I'll never forget the fear I felt before each ultrasound to check on my smaller twin's progress, and the relief I felt when Baby A was finally declared out of danger.

Here's what you need to know about Vanishing Twin Syndrome.

Vanishing Twin Syndrome occurs when twins are seen on an early ultrasound but one of the gestational sacs or fetuses has "disappeared" on a later ultrasound, says Dr. Mark Payson, a reproductive endocrinologist who also serves as the medical director of CCRM Northern Virginia, an infertility clinic.

The vanishing twin generally stops developing and is absorbed back into the uterus, which accounts for its apparent disappearance, according to Dr. Payson. But in some cases, it can become "mummified" or leave behind small signs like a cyst on the placenta.

Dr. Payson estimates that the frequency is around 20 percent of twin pregnancies. However, many women never have an early ultrasound so they never know they were carrying a twin. "Before high quality early ultrasounds, this diagnosis did not exist," says Dr. Payson. "A pregnancy could be lost in the first trimester of pregnancy without ever being identified."

Because of this discrepancy in access to early ultrasounds, the real rate is likely even higher. Some studies suggest that 30 percent of all twin pregnancies may result in a vanishing twin.

If you're pregnant with twins, learning the statistics of Vanishing Twin Syndrome can be frightening. But 80 percent of all losses occur before doctor's can even hear a fetal heartbeat, Dr. Payson says.

Once you've reached the second trimester, the risk decreases substantially. After 20 weeks gestation, the risk of losing a twin is only about 3 percent, according to Dr. Yana Markidan, a Princeton, N.J., based OB-GYN. Thankfully, if Vanishing Twin Syndrome does occur, the majority of surviving twins are delivered without additional complications.

4. There are signs to look out for

Other than being pregnant with twins, there are few specific risk factors for Vanishing Twin Syndrome, says Dr. Payson. As long as you're maintaining a healthy lifestyle and avoiding alcohol and tobacco, you're doing everything you can to protect your twins.

However, there are some signs that you might be experiencing a vanishing twin. If you experience a temporary decrease in pregnancy symptoms (like nausea or fatigue), spotting, or cramping, you might decide to contact your doctor. Dr. Payson cautions against taking these signs too seriously, however, because spotting is common in early pregnancy and the "vast majority" of spotting isn't related to a vanishing twin.

In most cases, twins "vanish" because they have chromosomal abnormalities. "Most miscarriages are due to chromosomal (genetic) abnormalities with the embryo, creating a fetus that never would have been viable in the first place," says Dr. Payson.

Twin Fetal Development: A Closer Look at Your Developing Babies

5. Losing a twin is complicated for grieving parents

Although my first set of twins survived, I suffered a vanishing triplet at nearly 10 weeks gestation in a later pregnancy. As happy as I was to give birth to healthy twins, I mourned the loss of that triplet for a very long time.

My experience wasn't unique. Dr. Payson says many of his patients struggle with the grieving process after losing a twin. "This can be a very emotionally difficult process, and made even more emotionally confusing when there is the joy of a single pregnancy combined with the sadness for the loss of a twin," he says. "Know you are not alone, and understand that this is a common and normal process. Enjoy and be happy with the normal pregnancy that is continuing."

That can be easier said than done. Annalise Green lost a twin at 9 weeks gestation. While she says the hardest part of her experience was seeing only one living baby on the ultrasound, losing a baby while remaining pregnant with the other made for a strange grieving process. "You're torn between joy and sorrow simultaneously. Even now I have moments of sadness where I look at my daughter and think "what if?'" 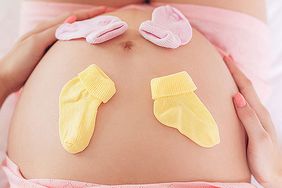