Many signs of miscarriage—such as spotting and cramping—also occur during pregnancies that will progress. So how do you know if you’re having a miscarriage? Read more about the red flags, and learn what to do if something doesn't seem right.

Miscarriage is defined as the spontaneous loss of a pregnancy in the first 20 weeks. According to the American College of Obstetricians and Gynecologists (ACOG), about 15 to 20% of pregnancies end in miscarriage, though experts believe there are a significant number of miscarriages among people who don't even know they're pregnant yet.

"We estimate that about 30 to 40% of all conceptions result in a pregnancy loss," says Helain Landy, M.D., professor and chair of the Department of Obstetrics and Gynecology at Georgetown University Hospital. "This is because many women miscarry before they know they're pregnant, or before it has been confirmed by a health care provider."

Many couples blame themselves or their behavior if they have a miscarriage, but in most cases, there's nothing you've done to cause it—and there's nothing you can do to prevent it. The ACOG explains that the most common cause of miscarriage is a chance genetic abnormality in the embryo. Other causes might include hormonal imbalances, uterine problems, chronic illness, and high fever. Certain factors—such as drug use, excessive drinking, and advanced maternal age— may also increase your risk, but in most cases, there is simply no cause or way to prevent a miscarriage.

The good news is that people who experience miscarriages usually go on to have successful pregnancies afterward. In fact, at least 85% of people who have suffered a miscarriage will have a healthy, full-term pregnancy the second time around.

Are you wondering how to tell the difference between miscarriage symptoms or standard-issue pregnancy problems? Keep reading to learn how to determine what's normal, and what could be a cause for concern.

More than 80% of miscarriages occur in the first trimester—which is why many couples don't share their pregnancy news until they pass the 13th week (however, just for the record, when you announce your pregnancy or share your news is completely up to you and there's no "wrong" or "right" time to do so).

So what are the first signs of a miscarriage? "Depending on the medical situation, the physical process of losing a pregnancy can vary from person to person," says Jennifer Jolley, M.D., Assistant Professor of Maternal-Fetal Medicine at the University of Washington in Seattle. Here, we break down some signs of miscarriage in early pregnancy.

Cramping with spotting is the number one sign of an early miscarriage, according to New York-based Zev Williams, M.D., Ph.D., director of the Program for Early and Recurrent Pregnancy Loss (PEARL) at Montefiore Medical Center/Albert Einstein College of Medicine. Miscarriage cramps occur because uterine contractions expel the contents of the uterus.

Bleeding during pregnancy is one of the most common miscarriage symptoms, and it should always be brought to the attention of a doctor. "We take bleeding very seriously," explains Dr. Joshua Hurwitz, a board-certified OB-GYN and infertility specialist. "That being said, it doesn't mean that every time you bleed, you're having a miscarriage. While a lot of bleeding in pregnancy is benign, we bring a lot of women in for reassurance."

You should assess your bleeding before calling the doctor, according to Dr. Hurwitz. "Ask yourself what kind of bleeding it is," he states. "Is it one drop of oldish, brown blood or are you filling up pads with bright red, period-like bleeding? Those are the types of questions we will be asking to help you figure out what's going on." Generally, the heavier the bleeding, the more cause for concern.

Similarly, some people will pass discharge (white-pink mucus), tissue, or clot-like material while having a miscarriage.

Pain can be another sign of miscarriage in early pregnancy. This pain may be located in the abdomen, pelvic area, or lower back, and it can range from dull and aching to period-like cramping. It may be difficult to distinguish if the pain is normal, since round ligament pain and even cramps can occur during early pregnancy as your body expands for the growing uterus. Always consult your doctor if you're unsure.

Signs of Miscarriage in the Second Trimester

Late miscarriages occur in the second trimester, about 14 to 20 weeks into the pregnancy. They are far less common than earlier miscarriages, but they still impact about 2% of pregnancies.

Miscarriage symptoms after 14 weeks are similar to the signs of early miscarriage—but the pain and bleeding will be more pronounced, and you may pass significant clots with the bleeding.

Another potential late miscarriage symptom is decreased activity of your baby. Pay attention to your baby's activity levels, and if you notice a sudden or drastic decrease in activity, be sure to let your doctor know immediately. They'll determine if further testing is necessary.

I Have Miscarriage Symptoms—Now What?

Whether you're early in pregnancy or further along, call your doctor if you experience any troubling symptoms. "It's far better to call and be told that there's nothing to worry about than not to call and miss something important," asserts Dr. Williams. "Bleeding or pain early on in a pregnancy are both good reasons to call and get checked out."

Some people may also have no physical signs of miscarriage. Dr. Hurwitz says that many calls he receives from patients have to do with their feelings. "She might say, 'I don't feel pregnant anymore,' or "I used to have nausea and now I'm so worried.'"

And while it is true that pregnancy hormones wane after a miscarriage, resulting in a decrease of breast tenderness or resolving nausea, for instance, it's not necessarily the first symptom either for everyone. Some people may also have more anxiety over their pregnancy than others, especially if they have experienced a loss before, so it's important to always reach out to your doctor and keep in mind that not feeling pregnant is most always a sign of a miscarriage. Additionally, keep in mind that a reduction of pregnancy symptoms is also a completely natural part of a pregnancy that will progress too. Symptoms like morning sickness and breast tenderness tend to decrease as you transition from the first to the second trimester.

There is no way to stop a miscarriage from happening once it's started, but you should still reach out for help through the process. According to Dr. Landy, however, it's vital to be seen by your doctor and treated to prevent hemorrhaging and/or infection and to manage your care, both physically and emotionally, moving forward. 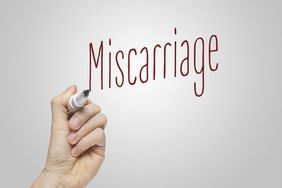