I suffered a miscarriage and it nearly destroyed me. But after sharing my experience on social media, I discovered just how many others deal with the loss. After getting pregnant again I knew I had to document the special moment.

Everything about my first pregnancy seemed so easy. I had prepared for it to happen months in advance, got pregnant on the first try, and the day of my missed period I just knew.

This one felt different. Other than some bloating, a little aversion to food, and a bit of fatigue, I didn't have the same feelings. I was terrified to go to the first doctor's visit because I felt I would have my dreams shattered.

I had my first exam at six weeks and was practically shaking in the waiting room. My husband, in contrast, was cool as a cucumber, thinking, "We've done this before. Piece of cake!"

My OB-GYN welcomed us back, nearly two years after my son was born. She then searched everywhere for a heartbeat and I knew, before my husband could suspect, this was not going to happen.

Our usually jovial doctor delivered the most clinical sentence I ever heard come from her mouth: "There is no heartbeat, no sign of the fetus and it likely never developed into a fetus. We call this a chemical pregnancy." I had never heard of the term, but it made it sound like I was never pregnant at all, which hurt even more.

Dealing With My Miscarriage

Miscarriage was something I never thought would happen to me, despite how common it is—there are about 1 million cases in the U.S. each year. But those numbers didn't help me feel ready to try again until months later. And every month of trying ended in me crying when my period made its appearance.

My patient husband, Josh, would comfort me, saying we'd try again next month. My sisters would assure me, it just wasn't meant to be and when the time is right, it would happen. My photographer friend Michelle, who was going to shoot our announcement photos, also spun it in a positive light. She said that when I finally did conceive, I would have a "rainbow baby" (an optimistic way of looking at the beauty after a storm).

A half-year had passed after my miscarriage and I was beginning to lose hope. I knew in the grand scheme of things, that's really not a long time when you're trying to have a baby, but after monthly disappointments and reminders of loss, I was practically defeated. And I was now embarking on what they call a geriatric pregnancy (a.k.a. pregnancy over the age of 35), if I were to even conceive again at all.

What Is a Geriatric Pregnancy?

While my fresh wound of miscarriage was starting to fade, it was time for me to let go of the pain from it. Writing is my therapy, so I sat down and wrote a post for my blog. I clicked publish and shared in on Instagram, and almost immediately calls, emails, comments, and direct messages came flooding in from people thanking me for what I wrote.

I was shocked to receive messages from strangers across the globe who admitted that they had experienced infertility or loss as well. Many of them said they hadn't even told anyone else, including a woman in Texas who sent me a message saying she had no one to talk to about her miscarriage and didn't know how common it really was until my post.

The message that struck me the most was from a woman who thanked me for not waiting for my "rainbow baby" to share my miscarriage story, as most people seem to do. During these times of struggle, we don't want to only hear about rainbows because the storm is what we can relate to most.

Getting Ready for My Rainbow Baby

Then, one day, my period didn't come. I had the same feeling I did during my first pregnancy and to my relief, I saw what I was hoping for on the test: a bright pink plus sign.

Our first appointment with the OB-GYN went as smooth as one could want. There was a heartbeat and she told me to come back in two weeks for the next checkup. It was going to be the longest two weeks of my life, waiting to know if the pregnancy would stick.

Despite some bleeding around week seven, which worried me, my doctor found a strong heartbeat and said everything looked fine. I still continued to live every day like there was a chance of something going wrong. Every time I went to the bathroom, I checked for blood. I didn't even open my Pinterest board with pregnancy announcement ideas I had collected. I didn't tell anyone until after 12 weeks, the time we also discovered we were having a baby girl.

When we finally had our announcement shoot, it was both the happiest and most stressed I had been in a while. Taking pictures to announce the pregnancy meant it was real. For the first time since I muttered the words "I'm pregnant" to Josh, I was actually celebrating it.

After all the image searches I did of pregnancy announcement shoots, I totally winged it. The only thing I planned was for my son to wear a "Big Bro" tee. I chose to wear a comfortable pink maxi dress that I knew would photograph well and accentuate my growing bump. Despite being a stylist, I didn't have the energy to dress Josh, so I told him to just match our son as best he could.

It took me weeks after the shoot with Michelle to get the courage to actually post the pictures, but once I did, it was like a weight off of my chest. I didn't have any more secrets and I could shout it from the rooftops that there was a rainbow after the storm to join the sunshine in my life.

Announcing a baby after a miscarriage was one of the scariest and most beautiful times of my life but I'm so glad I have images to remember those moments. 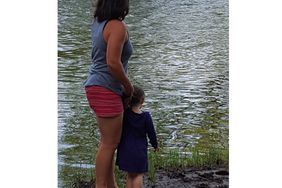 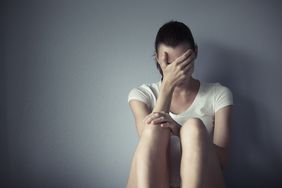 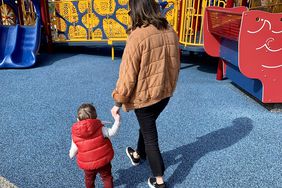 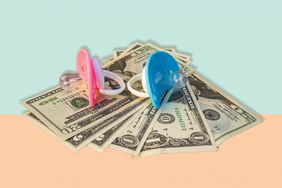