OMG! There's a baby in there! Yes, pregnancy can make even the most easygoing mom-to-be a little anxious, but you'll have far fewer fears if you check out these reassuring facts and stay-Zen advice.

During my first prenatal visit, I sat on an exam table and tried to act calm. But I was terrified. What if there were no heartbeat? What if it was quintuplets? The nurse checked my vitals and announced, "You've got a case of New-Mom Syndrome." "What is that?" I asked, panicked. She kindly explained that she and her colleagues coined the term to describe the many first-time pregnant women they see who, like me, are so nervous that their heart rate and blood pressure shoot up. The "syndrome" is hard to shake. By eight months, concerns about your pregnancy collide head-on with anxiety over delivery -- and beyond. But don't freak! Doctors say everything usually works out just fine. Whatever you're fixated on, we've got wisdom to help you chill.

I Could Lose the Baby.

A miscarriage was fear No. 1 among the moms-to-be American Baby polled online. "I have a family history of difficult pregnancies, so I didn't stop worrying until my daughter was born!" says Amanda Cotton, of Pensacola, Florida. About 10 to 15 percent of pregnancies end in miscarriage, usually early in the first trimester. Seventy percent of miscarriages are due to chromosomal abnormalities, says Steven R. Goldstein, M.D., a professor of obstetrics and gynecology at New York University School of Medicine. "It's a case of nature taking care of pregnancies that aren't viable." A miscarriage doesn't necessarily mean anything is wrong with Mom or Dad. And the odds of a second miscarriage are only 2.3 percent, according to the March of Dimes. Many moms polled also worried about their baby being stillborn (fetal death occurring after 20 weeks of pregnancy). The rate is a teeny 0.6 percent. You're probably already taking the best measures to lower your risk for miscarriage and stillbirth if you eat right, don't smoke or drink alcohol, and limit caffeine. And your health-care provider will keep tabs on any medical conditions (such as diabetes) that could increase your risk. Feel better?

Something Will Be Wrong with My Baby.

According to a poll by the March of Dimes, 78 percent of moms-to-be fret about birth defects. In this country, 1 in 33 children is born with some sort of birth defect. "But that represents a broad range of thousands of issues, many of them very mild," notes Diane Ashton, M.D., deputy medical director for the March of Dimes.

Yes, the sheer number of ultrasounds and tests you have to undergo can be overwhelming. (They can also begin to create a feeling of helplessness, like desperately hoping for a perfect score on an exam you have no way of prepping for.) But prenatal care and diagnostics are better than ever, and that should be a comfort. "The chance of something falling through the cracks is almost zero," Dr. Ashton says. Be completely honest with your provider about the medications you're taking, your habits, and your family history: It's key to getting the best care possible. Beyond that, enjoy your gestational duties.

I'll Embarrass Myself on Delivery Day.

We've all listened to a friend tell us about how she pooped on the delivery table while pushing or heard horror stories about the woman whose water broke at Applebee's. Jennifer Cousineau, of Waupun, Wisconsin, was so scared of the former, she asked her doc if she could take something to constipate her, to avoid any chance that it would happen. "He firmly told me no, and that if I went, it certainly would not be a big deal," she says. "Check those worries at the door!" Dr. Goldstein says. "Nothing that happens is going to be new to the nurses and doctors." And, hey, you'll get mileage out of that story for decades! Cousineau laughs about how she peed during labor: "My doctor paused, let me finish, and then went about his job. By that point, I didn't care." Jessica Porntono-Currin, of Wayne, Pennsylvania, seconds that attitude: "My water broke as my daughter's head was coming down, and it splattered the midwife in the face. That's when I realized that this is a normal day for them."

The Pain Will Be Bad.

How long will it last? How much will it hurt? These are huge unknowns. "It's no wonder women freak out," says Christiane Northrup, M.D., author of Women's Bodies, Women's Wisdom. "Those medical programs on TV show only the rare, traumatizing possibilities, not the run-of-the-mill births that represent the vast majority." Dr. Goldstein says: "Labor means work! But it doesn't have to be excruciating. We want to make the entire experience as comfortable as possible." Talk about pain concerns with your doctor, and trust that she won't want you to suffer. That's what did it for Porntono-Currin. "I put myself in my doctor's hands and tried to not overthink it," says the mom, who delivered her daughter sans distress.

It doesn't happen every day, but when it does, it's all over the local news: the mom who delivered her baby in a cab, with a taxi driver standing in as OB. In truth, you'd probably have enough time to fly across the country between your initial contraction and the baby's first cries. Labor and delivery last between 12 1/2 and 21 1/2 hours on average. "It's usually toward the longer end of the range for firstborn children," Dr. Northrup says. Have a chat with your M.D. or childbirth-class instructor to make sure you're clear on exactly when to head to the hospital. And do a trial run, so you'll know how long it takes to drive there!

I'm Not Going to Be a Good Mom.

You know who you are as an individual now, and perhaps as a partner, a professional, and even a pet owner. But what will happen when you add a child to this mix? Will you be able to balance the needs of your new life with your old one, not to mention teach your child, discipline her, and build her self-confidence? Gah! "I worried about whether I was capable of expanding my love enough for this new person," Dr. Northrup says. You'll be amazed. "Our ability as humans to bond is endless," Dr. Goldstein says. "If you're concerned about being a good parent, it means you really, deeply care. And if you care, you are going to be a good mom."

Reduce Stress and Boost Your Mood

Step 1: Sit, close your eyes, and take five deep, slow breaths through your nose. "Make sure the exhales are longer than the inhales," says Gina Norman, co-owner of Kaia Yoga Complete Wellness Centers, in Connecticut. "This will shift your nervous system into rest-and-relax mode."

Step 2: Say the following soothing mantra to yourself, either out loud or in your head: May I be happy. May I be healthy. May I be peaceful.

Step 3: Repeat this mantra to your baby: May you be happy. May you be healthy. May you be peaceful. "It helps to cultivate positive, compassionate feelings," Norman explains. "The more you do this exercise, the quicker you'll be able to center yourself, because your body will remember and respond to what you're asking of it."

You're up, you're down, you're wiggin' out. We'll ease your expectant-mama drama.

The Fat: It's no news flash that pregnant women put on pounds, but accepting them is another thing.Feel-better Fixes: Know that most of the added weight isn't fat, but the placenta and amniotic fluid, your enlarged uterus and breasts, and the increased amount of blood in your body. If the number on the scale still bums you out, ask the nurse to keep the details to herself and simply tell you if you're on a healthy track.

So Grumpy: During pregnancy, your body produces estrogen, progesterone, and other hormones at higher levels, which is why you may feel irritable at times.Feel-better Fixes: Steady your moods by keeping your blood sugar level. The secret: Eat small, frequent meals and cut back on sugar and caffeine. And hit the hay on the early side, because exhaustion tends to make everything seem worse.

Dazed & Confused: There's an oh-so-scientific term for the forgetfulness that's common right now: pregnancy brain. You can blame stress and surging hormones.Feel-better Fixes: Rather than rely on memory alone, make lists (lots of them!) and keep them handy, says Lucy J. Puryear, M.D., author of Understanding Your Moods When You're Expecting. For more on pregnancy brain, turn the page!

Originally published in American Baby magazine in 2011. Updated in 2014. 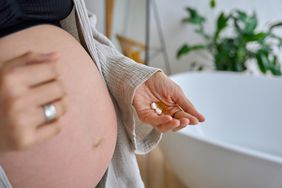