This common endocrine disorder affects 1 in 10 women and is a leading cause of infertility, but experts say it's still possible to conceive. Here, what you need to know.

Shortly after I gave birth to my first son I lost 30 pounds of the baby weight and figured I was on my way to my pre-birth pant size. Instead, those 30 pounds crept back on, plus 30 more. I figured it had to do with breastfeeding, which left me hungry and in need of extra calories. But after weaning my son two years later, the weight stayed. No matter how many workouts I squeezed in, I couldn't lose a single pound. I had to buy a whole new wardrobe.

My period hadn't come back either, which I found strange. Wasn't it supposed to return after I stopped breastfeeding? And while I wanted to get pregnant again, that wasn't happening either. Before long, another strange symptom showed up: a crop of very obvious black hairs began to grow on my chin and along the edges of my cheeks—sideburns and a beard, pretty much.

Frustrated, I finally saw a nurse practitioner. Blood tests revealed I had elevated levels of the hormone testosterone and low progesterone, which is linked to a lack of regular ovulation. Combined with the weight gain, extra facial hair, and absence of periods, it was enough for her to diagnose me with polycystic ovary syndrome (PCOS). A year later, an ultrasound revealed cysts all over my ovaries, which further cemented the diagnosis.

Since I had originally wanted to get pregnant again, my diagnosis left me with many questions about a health condition that I soon found out has many question marks around it to begin with.

Here, a bit about what PCOS is and how it impacts both your cycle and future potential pregnancies.

PCOS is a hormonal disorder that impacts between 5 and 10 percent of women between 15 and 44. Experts aren't 100 percent sure what the cause is, but the imbalance of reproductive hormones, along with insulin resistance—essentially when your body makes insulin but isn't able to use it effectively—are likely both at play. This can lead to inflammation and higher levels of androgens, hormones such as testosterone and dehydroepiandrosterone (DHEA), in the body, explains Anne Hussain, N.D., a naturopathic doctor based in Ontario, Canada.

These imbalances can also contribute to irregular menstrual cycles and the absence of ovulation. Since your body needs to ovulate in order to produce progesterone, PCOS can cause a drop in levels.

On top of other symptoms (many of which I was experiencing myself), PCOS is a common cause of infertility. But even if you have PCOS, you can get pregnant. Here's what you need to know.

Getting a Diagnosis Isn't Always Easy, But It's Important

Some research suggests it takes an average of two years and three doctors to get a PCOS diagnosis. This could be because PCOS has many different symptoms, but also because doctors may not have up-to-the-minute knowledge about the condition, as outlined in a 2018 study in the International Journal of Environmental Research and Public Health. That's partly because, over the years, several different sets of criteria have been developed and used to diagnose PCOS. Some sets require a patient to show signs of both elevated androgens and an absence of ovulation, but the most recent set of criteria involves having two of these three symptoms: elevated androgens, an absence of or irregular ovulation, and polycystic ovaries.

Thanks to refined technology, especially via transvaginal ultrasounds, which don't have the obstructions of skin, muscle, and bone that pelvic ultrasounds do, it's getting easier for doctors to spot ovarian cysts, and hopefully make diagnoses.

But it took me over a year as well as a second medical professional to get a diagnosis.

Ultimately, knowing you have PCOS is important. That's not just because if you're hoping to get pregnant time can be of the essence, but also because if left untreated, PCOS can mean serious problems down the road.

Insulin resistance can increase the risk of type 2 diabetes, for example. And the Centers for Disease Control and Prevention (CDC) estimates that over half of women affected by PCOS develop type 2 diabetes by age 40 which impacts your health, and, if left unchecked, potentially your fertility.

If you feel like your doctor isn't listening to you or feel like you have PCOS but don't have a diagnosis, seek out an OB-GYN or endocrinologist who has experience diagnosing, treating, and working with patients who have the condition.

Keeping Your Weight in Check Could Help You Conceive

Changing your diet and exercise habits can help you both manage a PCOS diagnosis and help you conceive. For example, losing even 5 percent of your weight can kick-start your menstrual cycle, says Carolyn Cokes, M.D., M.P.H., an OB-GYN with the Metropolitan OB-GYN group, a Baltimore based practice affiliated with Mercy Medical Center. The medical community isn't sure exactly why this is. But since fat tissue creates its own estrogen, losing a small amount of weight might adjust the ratio of estrogen and progesterone, enabling ovulation, says Dr. Cokes.

Focusing on the Right Foods Can Regulate Your Cycle

"Eating whole-grain foods that don't spike up glucose and insulin can help regulate hormones and lower inflammation, which can play a role in fertility," says Angela Grassi, R.D., a registered dietitian and founder of the PCOS Nutrition Center in Bryn Mawr, Pennsylvania, and a mom of two who has PCOS.

Whole grains, beans, lentils, fruits, and vegetables, balanced with protein and fat at meals and snacks are a good place to start. She often recommends a balanced plate method: half vegetables, a bit of fat, one-quarter protein, and one-quarter high-fiber carbs (quinoa, beans, and brown rice).

Unsaturated fats, such as the omega-3s found in avocado, nuts, seeds, and fish, could help lower androgens and improve fertility, too, she says.

Try to minimize your consumption of foods that lack fiber and are high in sugar, as these can "increase glucose and insulin and impact fertility," Grassi adds.

Meds Can Help, Too

If lifestyle changes aren't working on their own to make changes, there are medications such as metformin that can help, says Dr. Cokes. Once I started taking metformin and adopted a diet with more vegetables and complex carbohydrates, I was able to lose 30 pounds, which regulated my menstrual cycle. Since every woman and every PCOS case is different, she stresses the importance of seeking out care from an experienced provider.

A PCOS Pregnancy Can Come With Risks

If you do get pregnant, make sure you talk to your doctor about the risks associated with a PCOS pregnancy. For example, there's some evidence that having PCOS means that there's a slightly increased risk of miscarriage, says Dr. Cokes. Doctors don't exactly know why, but insulin resistance and imbalanced progesterone levels could be at play. Some researchers also think that PCOS causes a state of chronic, low-grade inflammation, says Dr. Cokes, so that could contribute.

With a PCOS pregnancy, you're also more likely to develop gestational diabetes, pregnancy-induced high blood pressure (preeclampsia), or preterm birth, adds Alan Copperman, M.D., medical director at Progyny and fertility specialist at RMA of New York. Research points to insulin issues as part of the reason for these complications.

Your doctor can keep a close eye on your pregnancy and potentially consider it high-risk, which would result in extra monitoring to help ensure a safe pregnancy for both you and your baby. 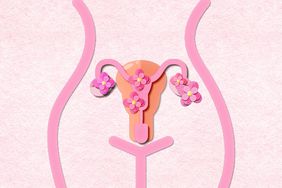 Your Chances of Getting Pregnant, During Every Phase of Your Cycle
Pregnancy Week 2 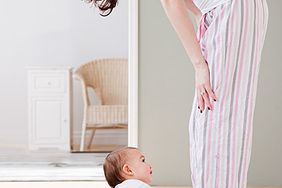 5 Causes of Weight Gain Moms Should Know About