Does being older make your pregnancy high-risk? Here's everything you need to know.

Growing numbers of women are becoming moms later in life these days. But while being 35 or older does increase your chances for developing certain high-risk conditions during pregnancy, the issues aren’t insurmountable, as the growing number of older mothers will attest.

"If a woman gets pregnant later in life, the chances of her having a successful outcome are better than ever because doctors know more about what to look for," says James E. Ferguson, M.D., president of the Society for Maternal-Fetal Medicine and chairman of the department of obstetrics and gynecology at the University of Kentucky in Lexington. "Many women aged 40 and older think the game is over when it's not." (Though clinically, "older mom" is defined as any woman who's at least 35, more realistically, doctors consider only women 40 and above to be in that category.)

Your health may be more important than your age. "I see 40-year-old women who are biologically 25, and 25-year-old women who are biologically 40," says Ferguson, adding that biological age is more relevant than chronological age. Biological age, he explains, is a combination of chronological age plus how the body functions: A body that is free of illness and uncompromised by smoking, heavy alcohol use, or obesity performs better. In other words, if you're in your 40s and healthy, you have a much better chance of carrying a healthy baby to term than a woman of the same age who has a chronic illness or poor health habits.

Having had a prior healthy pregnancy is another predictor of success, says Connie Agnew, M.D., a perinatologist at Saint John's Health Center in Santa Monica, Calif. For reasons doctors can't explain, first pregnancies have more complications than subsequent ones. Thus, if your first pregnancy was problem-free, there is a better chance that your next ones will be, too. "One of the best pregnancy candidates is a healthy 40-year-old woman who has three kids at home under age 7," Agnew says. "Her body knows what to do."

Pregnant Over 35: Assessing the Risks

Even older women who are in perfect health can't avoid the higher risk for certain pregnancy complications:

Difficulty conceiving: "We clearly see a decline in the probability of pregnancy with age," says Richard Paulson, M.D., director of the Reproductive Endocrinology and Infertility Program at the University of Southern California in Los Angeles. "For a woman in her early 40s, the probability of pregnancy – whether or not she is undergoing fertility treatment – is about half that of a woman 10 years younger."

Miscarriage: "If the average miscarriage rate is 20 percent, the risk is closer to 25 percent for a woman in her 40s," says Ob-Gyn professor Ferguson.

Diabetes: Older moms are at greater risk of developing gestational diabetes because their endocrine systems aren't quite as resilient as younger women's.

Aches and pains: "All the body systems that pregnancy normally impacts get impacted a little more with age," Agnew says. For example, the extra weight gained during pregnancy may take a greater toll on an older woman's musculoskeletal system, causing more back and muscle aches.

Cesarean section: According to the National Center for Health Statistics, the Cesarean rate for women older than 40 is 41 percent, almost double the rate (21 percent) for women between the ages of 20 and 24. According to Ferguson, there are three main reasons: An older woman's uterus doesn't always contract adequately; older women have a higher rate of preeclampsia, or pregnancy-induced high blood pressure, which often requires a Cesarean delivery; and older women are more likely to develop gestational diabetes and thus have bigger babies.

Low-birth-weight babies: Fetal growth restriction, which occurs when blood flow to the fetus is reduced, is more common among older moms. That's because as a woman ages, her circulatory system becomes less robust, so she may not deliver as much blood to the uterus and placenta.

Birth defects: While good health habits can offset some potential problems, no amount of exercise or other behaviors can change one reality: the age of your eggs. Though scientists don't know why, older eggs are more likely to result in babies with chromosomal abnormalities. For instance, the risk of having a baby with a chromosomal defect increases with the mother's age: A 33-year-old woman has a 1 in 208 chance that her baby will have a defect such as Down syndrome, according to the American College of Obstetricians and Gynecologists. Among women 10 years older, that number is 1 in 19. 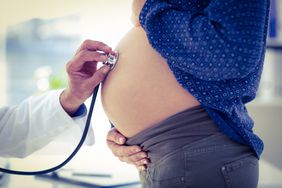