What You Should Be Worrying About (More Than Ebola)

If you click on news sites, watch the news, or read the paper (yes, some people still do), you've likely found it impossible to avoid being bombarded with scary details about the lethal and virulent virus's spread—and efforts to contain it in this country following a shaky start. In some ways it's understandable: If you've seen Contagion or the most recent Planet of the Apes reboot—in which fictional deadly viruses wiped out large swaths of the population—it's not hard to envision ebola as a plague with no cure and the potential to kill thousands.

Now for a reality check: As of this writing, do you know how many people have been diagnosed on U.S. soil? The answer is five. How many have died? One—the man who inadvertently brought the disease with him from Liberia. Despite this, there has been widespread panic leading to school closures (in Ohio and Texas) and hesitance by many to fly or take a cruise, even though no one other than healthcare workers who were treating Thomas Duncan.

What should you really be concerned about? Influenza. This virus has been around a lot longer. It's far more familiar and a lot less intimidating to us. But at this point (and for the foreseeable future), it's also a lot more dangerous. The flu kills more than 30,000 Americans every year. About 20,000 children under age 5 are hospitalized each year because of influenza complications, according to the Centers for Disease Control and Prevention. And last season, more than 100 flu-related pediatric deaths were reported.

These numbers are truly scary—largely because the vast majority of these tragic deaths are easily preventable. All it takes is an annual flu vaccine. You can take your child to the pediatrician's office (often, a nurse can administer it without a separate doctor's appointment) or your local CVS. Get one too while you're at it.

Don't put it off, as too many parents do. Only 57 percent of kids are vaccinated each season, and only about 40 percent of adults. Those are crazy statistics when you consider that one out of six people will get the flu. True, the vaccine isn't foolproof, since strains of the virus vary from year to year. But if your child gets it despite being vaccinated, her symptoms—high fever, body aches, chills, headache, sore throat, coughing, and sometimes vomiting and diarrhea—are likely to be far less severe. And it's safe for anyone older than 6 months, even for those with severe egg allergies.

If you fear that getting a shot will lead your panicked kid into a full-blown tantrum, take heart: A nasal spray is now the preferred vaccine delivery method for healthy children 2 through 8. (If you're squeamish—and not pregnant—you can go with an inhalation instead of an injection as well.) Kids and adults with an underlying medical condition, such as asthma, need to stick with the shot. It's not that bad, though, especially compared to suffering through a miserable week or two this winter (or worse).

You can't do anything about ebola, and for now there's little reason to worry. But you can fight the flu—and you owe it to your family to do so. 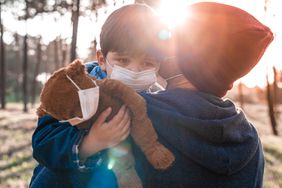 How to Explain Vaccines to Children