Jennifer Garner Wants You to Join the #GlobalMoms Discussion

What kind of world do you want for your family by 2030? What can be accomplished in 15 years to make this a better world for our children?

Experts and advocates came together last Friday for the third annual Moms +SocialGood event to jump-start this very conversation. The all-day event, which is just one part of the Global Moms Challenge, is dedicated to the power of mothers and families to improve the future for their communities. This United Nations Foundation initiative, along with the support of Johnson & Johnson, has already helped more than 120 million women across the globe.

The event included individual speakers and panel discussions focused on the many facets of parenthood and childhood. One of the many speakers was mother, actress, and member of Save the Children's board of trustees, Jennifer Garner. Like every mom, Garner adores her three young children—but she's also devoted to the well-being of all kids. Parents had the opportunity to submit questions to Garner, who answered via video response, about her experiences with motherhood and some of her greatest passions.

Moms +SocialGood is all about the power of moms and families. When do you feel the most powerful as a mom?

JG: I feel the most powerful as a mom when I can handle the challenges of motherhood with equanimity and remember that they're just little kids and not try to expect them all to be mature enough to handle the disappointments of life that can throw kids into a tizzy. When I can be calm and carry on that's when I feel like...okay, I did it!

As the third annual Global Moms Relay kicks off, what's your answer to the question, "What kind of world do YOU want for your family by 2030?"

JG: If I'm thinking just about my family, I'm hoping that my kids are engaged in the world, that they have balance in their lives, and are enjoying all of the incredible opportunities that the world has to offer them. But I also hope that we have enough water, I also hope that kids' needs are being met all over the world, that kids are living until 5 in developing nations, which is so doable, and that kids in the United States are getting the right chance to start off on the right foot.

Although you're actively involved in many ventures, what specific projects are you channeling your energy toward right now?

JG: With Save [the Children], I was just in South Carolina trying to raise the visibility of the importance of birth to five education, development, nurturing moms who have newborns—particularly, moms who are raising kids in poverty. One in three kids in rural SC is growing up in poverty and 72 percent of 4th graders in SC are not reading at grade-level—there's a real connection there. So I was just there trying to boost the morale of the legislators and say 'come on, let's fight for little kids and let's make sure money is going in the most effective places.'

When you first became a mother, what would you say was the one thing that changed the most?

JG: It's such a huge change, and it's such a huge shift. I had to really fight from becoming isolated, and I've always been social and I love my girlfriends, but you kind of go into your little bubble, which is not really a great place to be. Parenting should be done as a part of a community.

Millions see you as a role model, but who do you look up to the most? And why?

Related: For more on mothers around the world, read about Save the Children's recently released State of the World's Mothers report. 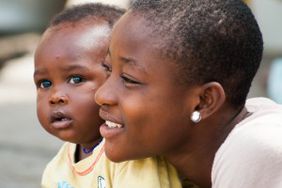 A Way to Help Kids and Moms: Are You Up for the Challenge?