Is Your Home as Safe as You Think?

In fact, preventable injuries are the leading cause of death for children in the U.S.

And among children up to 12 years old, their injuries often happen at home.

This is what prompted Nationwide Insurance to embark on an ambitious campaign called Make Safe Happen. The goal is simple: to reduce the number of preventable injuries in and around the home. Through the web site and free app—both called Make Safe Happen—parents and caregivers can learn exactly how their child is at risk. Both methods are impressively user-friendly; you can sort the info based on your child's age, the various parts of your home and yard, and injury types.

One of the most helpful features of the app is the product recommendations. Say you're looking at a checklist of steps to take to make your toddler's bedroom safer: Among them will be to install window locks and guards. In addition to the tip, you'll be prompted to immediately shop for the items and can be directed straight to Amazon to buy them.

Also key: Automatic reminders imported into your calendar, which are perfect for precautions like testing your smoke alarms every month and replacing their batteries.

All of the information has been created and vetted by experts from Nationwide Children's Hospital in Columbus, Ohio, and Safe Kids Worldwide in Washington, D.C. Among the main contributors was Lara B. McKenzie, Ph.D., principal investigator for the Center for Injury Research and Policy at Nationwide Children's—and mother of 3-year-old triplets! (I'm exhausted simply typing that phrase.) Though she'd already been working in the injury-research field by the time she became a mom, motherhood is what really brought this issue to life, she says: "In my professional world, we're always asking how we can get parents to adopt countermeasures to prevent home-related injuries. When my kids were born, I thought, 'Why do we have to make it so hard?' And this is the idea behind the app: I'm standing in my kitchen, and I know I need to lock the cabinets. But what kind of locks do I need? I need to secure my TV to the wall—but what kind of straps should I buy? We're answering those questions for parents. We're telling them about the hazards, as well as the products that can reduce the consequences."

I blogged just the other day about parents who go to incredible lengths—true extremes—to keep their children safe. It would seem I'm being hypocritical, following that up with a post about how dangerous our homes can be. But the reality is this: If you've taken the proper precautions around your home, with help from resources like the Make Safe Happen site and app, and if you're aware (not hyperaware!) of what your child is up to, then you've done right by your child.

Kara Corridan is the health director at Parents. She has two young daughters and needs the Make Safe Happen app more than she cares to admit. 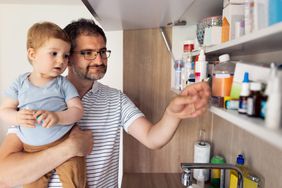 How To Safely Store Medicine At Home 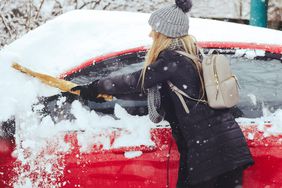 How to Keep Kids Safe in Cold Cars